Plumbing the depths of water safety

Researcher awarded $1.1M in federal funding to build a domestic plumbing lab to study the growth of water-based pathogens in drinking water. 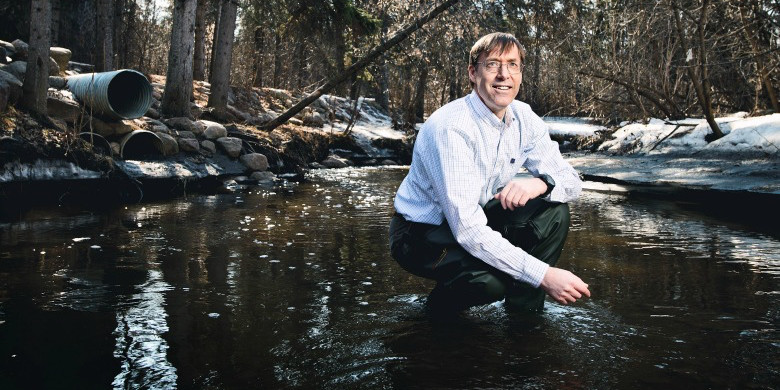 (Edmonton) The development of safe municipal drinking water systems has saved more lives and prevented more illness than practically any other public health innovation, according to Nicholas Ashbolt. But the risks presented by water-based pathogens that reside in drinking water distribution systems and can rapidly grow in household plumbing aren’t so well understood, a situation Ashbolt aims to clarify through his work as Alberta Innovates - Health Solutions Translational Health Chair in Water at the University of Alberta’s School of Public Health.

“Alberta is the first place in North America to take on a drinking water safety plan, which means we look at the hazards—the chemicals and microbials that might cause harm from local sources and focus on management at control points all the way to customers’ taps,” Ashbolt says. “If we’re really concerned about what people are actually exposed to, good quality drinking water goes through what we call the premise plumbing—be it a high-rise building or single household dwelling, which generally further deteriorates the quality of that water. And we don’t really understand to what degree that happens or what the health significance of that is.”

Ashbolt is one of four U of A researchers to share in more than $1.1 million in funding from the Canadian Foundation for Innovation (CFI) announced July 28. Ashbolt says his grant will go toward creating the first custom-built premise plumbing facility in Canada to focus on controlling microbial hazards.

The premise plumbing lab, which simulates a domestic plumbing system, will examine the role of different pipe materials, residual disinfectants, water temperature and stagnation in fostering or suppressing different kinds of microbial growth. Ashbolt says the facility’s microbiology lab will be used to identify microbial community members for risk indicators and assess the fraction of these water-based pathogens that end up in aerosols from shower heads, flushed toilets and garden sprinklers.

The first organisms of interest in Ashbolt's lab are Legionella pneumophila, nontuberculous mycobacteria and Pseudomonas aeruginosa, which can thrive in the microbial community or “biofilm” that develops inside premise plumbing. These pathogens differ from ‘enteric’ pathogens like Campylobacter and Norovirus in that they aren’t controlled by water treatment but grow in the environment, leading to infectious doses that can be inhaled into our lungs via aerosols.

“We have these community-acquired pneumonias where often the agent isn’t identified, but specific studies in Switzerland found some 20 per cent of those were thought to be due to Legionella-like organisms. A similar study of these pneumonias in Canada also estimated some 10 per cent. Bearing in mind that community-acquired pneumonias are probably the most common disease in society, if 10 per cent of these are coming from water-based pathogens, if not more, it’s potentially a huge issue.”

The Canada Foundation for Innovation has renamed its Leaders Opportunity Fund in honour of John R. Evans, the foundation’s first board chair. Created by the Government of Canada in 1997, CFI strives to build Canada’s capacity to undertake world-class research and technology development by investing in state-of-the-art facilities and equipment in Canada’s universities, colleges, research hospitals and non-profit research institutions.

Plumbing the depths of water safety