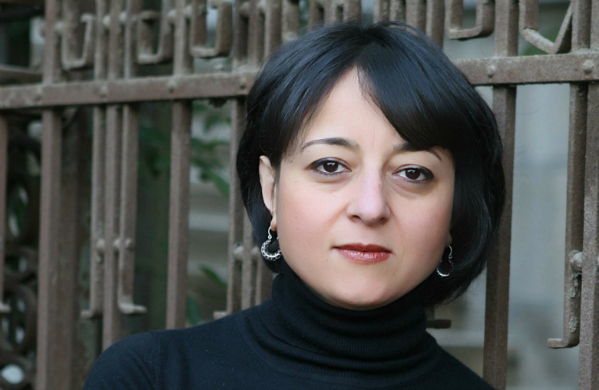 (Edmonton) The athletic performances have yet to begin at this year’s Olympic Games in London, but a University of Alberta professor and poet has already left a mark of a different kind in the city.

Iman Mersal, an assistant professor of Arabic language and literature, represented Egypt during the Cultural Olympiad Poetry Parnassus, one of the signature events leading up to the Games. She was among 150 poets from across six continents to read their musings.

Mersal says it was an overwhelming experience to represent her homeland. “Usually, I hate the idea of representing … a country, a gender, a colour or a religion,” she says. “However, in this case I felt proud; it was special because of the nature of the event, and because of Egypt’s recent revolution. I felt touched.”

Thousands crowding London’s Southbank Centre were treated to Mersal’s poetry in her three readings, for which she selected poems from her four previously published volumes and a few poems from an upcoming book, reflecting on a wide range of issues. When asked whether she considers her poems personal or political, she replies that they are neither.

“When you write a good poem, even about a flower, you’re actually working against dictatorship. This is my understanding of literature,” she says.

Although Mersal says she doesn’t write to fulfil a political purpose, some of her work could be interpreted that way. Consider Celebration, a poem whose translation was published in the summer 2011 issue of The Paris Review. “It’s actually a nightmare, not a celebration at all,” she says. “It was very strange. I was literally down on my knees and all I saw were different kinds of shoes. I was in a demonstration that was crushed by police. Nightmare has its own logic. Not every nightmare can be turned into a poem, but sometimes an image is so overwhelming that you really want to write it. When it’s read after a revolution you might link it to politics. But this poem was published in Arabic in 2008, just one of these things that happen by chance.”

For 12 days, her father was in intensive care, a reality that inspired The Clot. “It is an important poem for me. It was 1994. I was young, and I wanted to capture my complex relation to my father.” she says. “I learned a lot through this poem. It was a long struggle to capture this rich relation and not just accept one side of the narrative,” she says. Having lost her mother at an early age, she says her father afforded her privileges many girls her age didn’t get. “In that series of short poems, I was struggling to form my own voice.”

The Clot would not be the last of such queries. In her poem A Life, she rediscovers life upon reaching age 40. “The speaker in that poem is waking up one day and finding her life, one that she never saw before, sleeping next to her in bed. It’s a very sad moment,” she says.

“A Life talks about this moment of discovering one’s life, a life that one has been looking for, but whose discovery has come at the wrong moment,” she says. “I tried to write it on my 40th birthday but I didn’t succeed until maybe two years later, because so much was coming my way, emotionally. I wanted to be very cold in order to write it.”

She says she was shocked to be turning 40, but felt better than she did in her 20s. “I was a bit confused. I remember that I didn’t want any party for my 40th birthday.

“But I woke up on that day to find 40 giant illuminated pink bras had appeared in my front yard. It was an amazing mystery. When I found out that a playful friend had put them there during the night, I thought, well, I can play with the whole thing now, why am I being tense about turning 40?”

In The Idea of Hope, she explores a new struggle: the trouble with keeping hope. She says she was “driven by a philosophical desire to explore a very silly idea I had, one that controlled me for a few days, which was that I’m working very hard to be hopeful. Hope needs a lot of work, it’s not to be taken for granted. Losing hope is a luxury.”