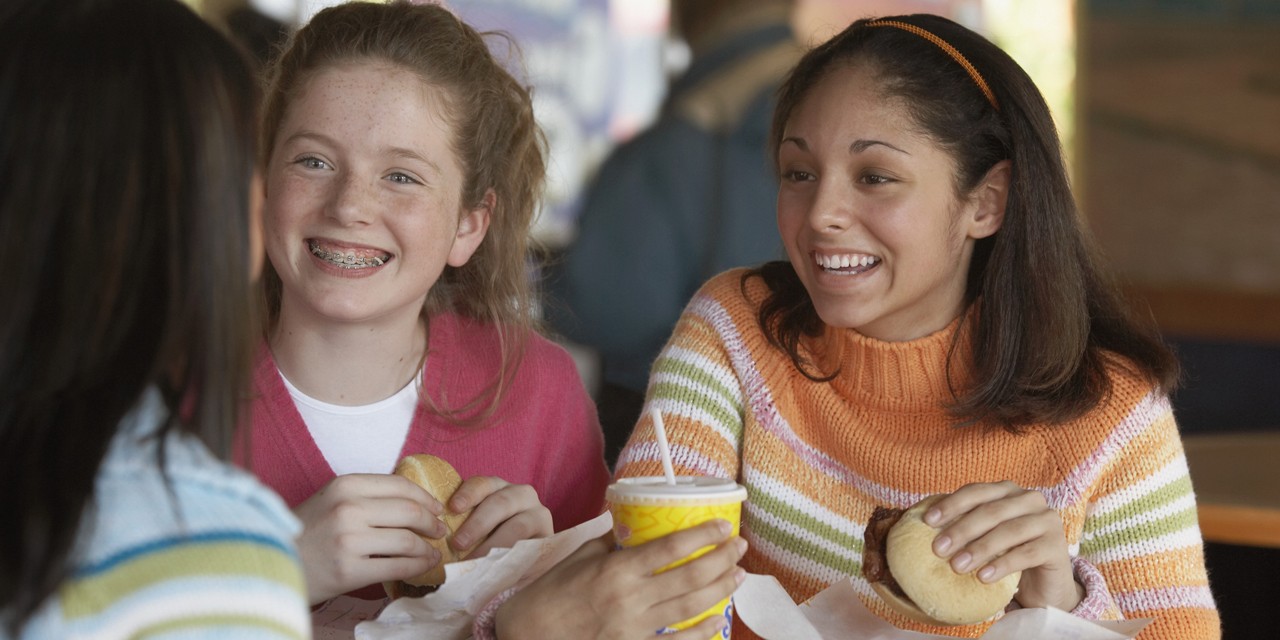 One of the findings in the Nutrition Report Card, produced by UAlberta’s Centre for Health and Nutrition, is that there is at least one fast food or convenience store within walking distance from 80 per cent of schools in Alberta’s big cities.
Three teenage girls sitting at a table and eating

Alberta could do much more to provide nutritional support for its youth, according to UAlberta’s annual 2017 Alberta Nutrition Report Card on Food Environments for Children and Youth.

“Kids between the ages of 12 and 17 in this province are not getting the support that younger children are receiving to make healthy nutrition choices,” said Kim Raine, the lead author of the report card. “This is likely to play out in poorer health status as they transition to young adulthood.”

The third annual Nutrition Report Card, produced by UAlberta’s Centre for Health and Nutrition, assesses and grades key indicators in Alberta’s food and nutrition environment, and offers strategies based on how policies and environments interact to shape children’s health-related behaviours and body weights.

Raine—a registered dietitian and professor in UAlberta’s School of Public Health, and the scientific director of UAlberta’s Centre for Health and Nutrition—said that this year’s report helps explain the startling new Statistics Canada data that shows the trend in overweight and obese kids aged 12 to 17 is up to 31 per cent in 2015 from 29 per cent in 2004.

“Around the time kids enter junior high, they begin to have the freedom to leave school on their own, and often to buy their own lunches,” she said. “Our report shows that in 80 per cent of food environments around schools in big cities like Edmonton and Calgary, for example, there is at least one fast food or convenience store within walking distance.”

That’s not all. Raine says kids are bombarded with junk food advertising online, on their smart phones and at home on television.

“Companies marketing unhealthy foods to teens spend in three days on advertising what government spends a year on nutrition promotion,” she said.

To help counterbalance the environment that puts youth at risk of unhealthy eating, the report card recommends a couple of policy-based measures.

“We’d like the province to expand its successful Alberta School Nutrition Program, which offers kids up to Grade 6 a daily nutritious meal, to grades 7 to 12,” said Raine.

The report also encourages the mandating of Alberta’s Nutrition Guidelines for Children and Youth into all settings, including recreation centres.

“Some schools have mandated them, but not all. And 67 per cent of foods offered at rec centre concessions or vending machines are junk food,” said Raine. “These guidelines have been around for almost 10 years. We know they work. We’ve invested all this time and money into making them, but what value are they if no one follows them?”

As well, the report encourages teaching food skills to children between the ages of 12 and 15.

“At one time, kids used to be required to take a home economics class. If you look at other countries like Finland, food skills are part of all school kids’ education. It helps kids to understand how to prepare foods, to make decisions about what to buy, and even to navigate the complexity of messages they receive from slick marketers,” she said.

Raine and her research group are also advocating for the development of a national regulatory system to stop marketing foods and beverages to children under 18.

“Quebec has had a restriction on all advertising to kids since 1980. They don’t have a fast food culture, and they also eat more fruits and vegetables,” she pointed out. “We would really like to see this successful policy expanded to the rest of Canada.”

A cost-deterrent for youth would be the implementation of a tax on sugar-sweetened beverages, she added.

It’s not all a failing grade, said Raine. Overall, for the 36 indicators examined in the report, the province received a C, an improvement over last year’s D. “Alberta has done a few important things to help younger children, like its school nutrition program,” said Raine.

And she believes the efforts are reflected in the decreasing trend found by Statistics Canada in overweight and obese children age two to 11 to 20 per cent in 2015 from 24 per cent in 2004.

“But now we need turn our focus on developing interventions to address the risks that youth face, especially when they are just gaining the responsibility of making their own food choices,” she added.