‘Politics is fun’ but don’t lose your way: former MP 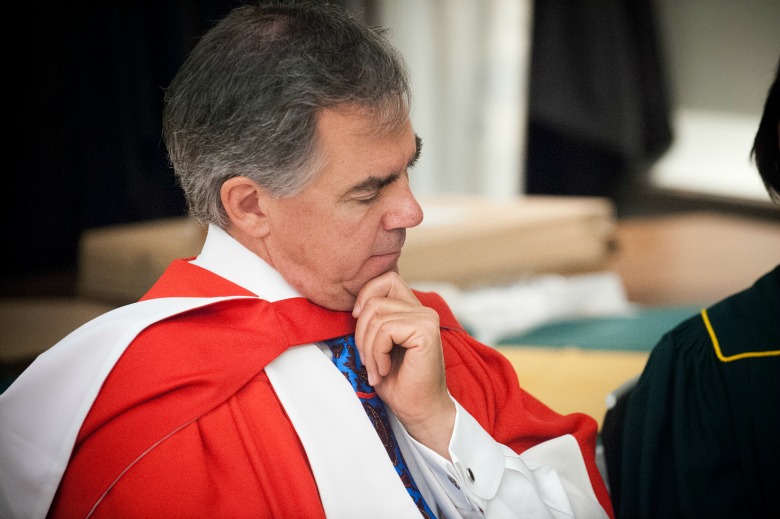 (Edmonton) Eric Prentice would sooner cross the street than run into a politician. So it wasn’t exactly a surprise when he failed to view public life as a “noble calling” like his son Jim did.

Jim Prentice, a University of Alberta alumnus, former MP and senior cabinet minister in the Harper government, said in the final months of his father’s battle with ALS, the elder Prentice cried while watching his son—the politician—on TV.

“Not out of sorrow, but out of pride that he actually did not expect to feel. He still didn’t like politicians, but he liked his politician—his son,” Prentice told graduands from the Alberta School of Business, upon receiving an honorary doctor of laws degree June 13.

Before his father died, Prentice promised he would leave politics with the family name intact. It was a promise he upheld by holding true to his values and resisting ethical dilemmas—pressure that intensifies the closer you get to the top.

Despite the pressure and public scrutiny, “politics is fun” and worth pursuing, added Prentice, who left public life after three electoral victories. It was a career of challenges, he said, overseeing the oilsands, environment, foreign investment and partnerships with First Nations.

There were lighter moments, too. He helped discover the HMS Investigator, lost in the Arctic ice since 1848, and once held a panda on his lap.

None of these highlights would have been possible without the U of A and his business degree—the “underpinning of my career.” Politics, added Prentice, now a senior executive with CIBC, needs an influx of new representatives with new perspectives—people like you with a strong business acumen.

“Canada, your country, is indeed the greatest country,” and you are entrusted with its future, he said. “Be bold. Serve your community, serve your country. Make your nation proud, make your families proud.”