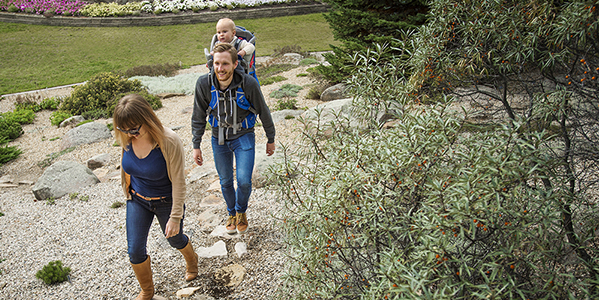 The Alpine Garden is a popular place for a family stroll at the newly renamed University of Alberta Botanic Garden.

It’s now known by another name, but its roses smell just as sweet.

Today the Devonian Botanic Garden officially becomes the University of Alberta Botanic Garden, a change that reflects both its history and its importance as an remarkable educational resource in the province.

“We’re always evolving,” said Lee Foote, the garden’s director.  “After more than 40 years under the garden’s previous name, it will soon be time to refresh both our buildings and our site, so it seems appropriate to start any renewal with an accurate name.”

Since the garden plays a significant role as a research site, hosts adult and child classes year-round, and is one of Alberta’s top visitor attractions, it’s relevant to remind the public of its strong ties to the University of Alberta, where it is part of the Faculty of Agricultural, Life & Environmental Sciences, said Foote.

The 240-acre property, located 15 minutes southwest of Edmonton, is the province’s largest botanic garden. It was established in 1959, as the Botanic Garden and Field Laboratory, in the then-Department of Botany at the U of A.

Following floods that severely damaged the grounds, in the 1970s it received a donation from the Devonian Foundation and funds from the Friends of the Garden. That support helped the garden expand with new land, a system of canals and ponds, and a headquarters building. In recognition of the support, its name was changed to the Devonian Botanic Garden, with a 25-year commitment to maintain the name.

Since then, several misconceptions have sprung up. Some people thought the old name was a reference to the Devonian geologic period, to the nearby town of Devon, or to an indoor garden in a Calgary office tower called The Devonian Garden.

None of that is true, and the name change is an opportunity to gently but elegantly correct the record, while also reminding Albertans of the previous benefactors’ generosity. The Devonian Foundation was a philanthropic organization—started by the family of oilman Eric Harvie in the 1950s—which funded many projects in Alberta and beyond until it ceased operations in 2000.

Renaming the botanic garden also helps emphasize core values of the U of A, said Stan Blade, dean of the Faculty of Agricultural, Life & Environmental Sciences.

“As a site for learning, research, recreation and the appreciation of beauty, the garden embodies the promise of the University of Alberta of being ‘for the public good,’” he said.