I found that the information kind of leapt off the pages because it was so visual and there was lots to keep you engaged.

With more than 23,000 registered students, U of A’s Indigenous Canada was the most popular MOOC in Canada last year. 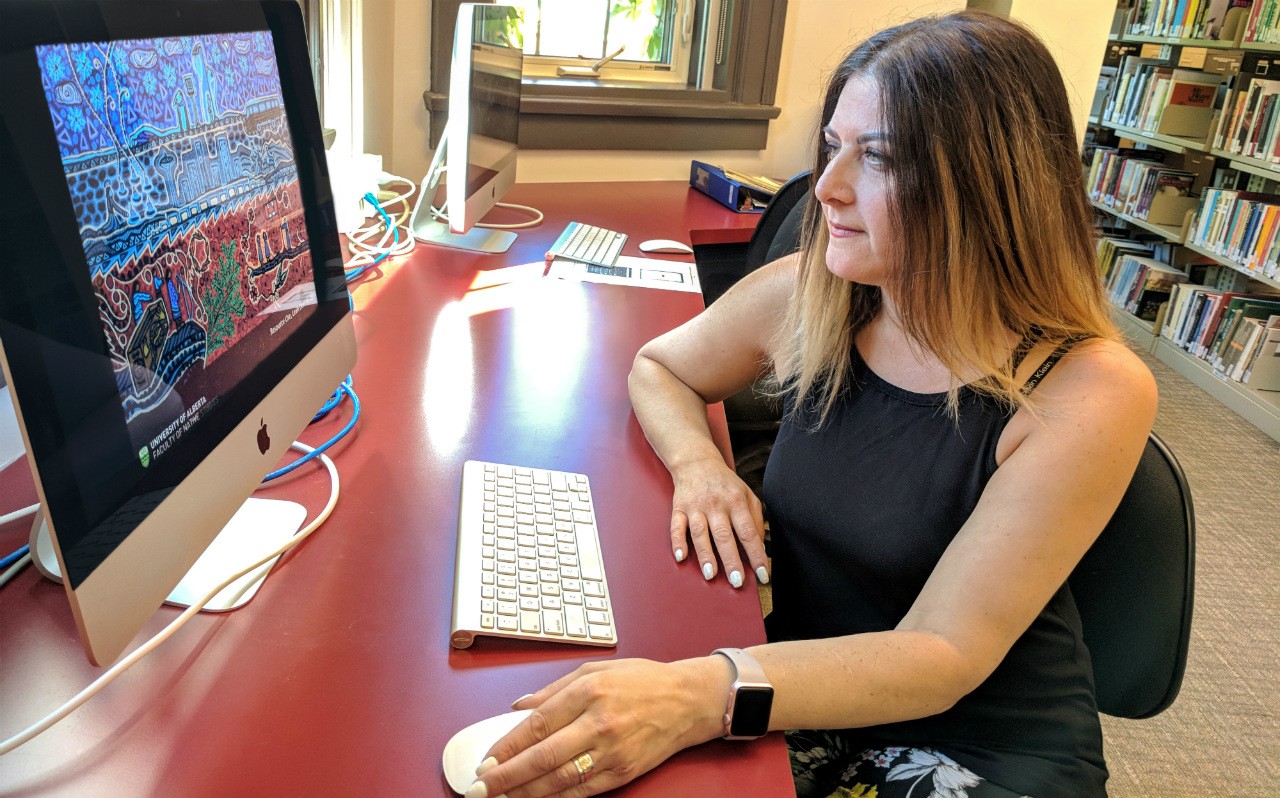 Jennifer Ward is one of the more than 23,000 learners who have taken the U of A's massive open online course, Indigenous Canada. The course was the most popular offering in Canada last year on the Coursera platform. (Photo: Sean Townsend)

When Jennifer Ward signed up for the Indigenous Canada massive open online course (MOOC), she didn’t quite know what to expect.

“You know when you watch a really great TV show and there’s a cliffhanger? That’s kind of what it was like: ‘Oh! What am I going to learn next?’ I binged it!”

Ironic, given Ward, an Umpqua woman who works with the Centre for Teaching and Learning at the University of Alberta, was apprehensive at first, thinking she might not complete the course.

“The MOOC is just different, in the way that it delivers the message. I found that the information kind of leapt off the pages because it was so visual and there was lots to keep you engaged. When you’re listening to people who have the lived experience, and can really share from the heart, the information I think is so valuable,” Ward said.

Indigenous Canada, which teaches Indigenous histories and contemporary issues from an Indigenous perspective, was the most popular online course in Canada in 2017 on the Coursera platform. The MOOC was created by the U of A’s Faculty of Native Studies and is available free to anyone, anywhere.

Tracy Bear, who leads the Indigenous Women and Youth Resilience Project at the university, was the academic lead in the development of Indigenous Canada. One of her major priorities was ensuring it came from the perspective of First Peoples.

“That’s what I’m most proud of, being able to situate ourselves in an Indigenous mindset and ideologies, and keeping that Indigenous perspective before moving on to ‘and then the colonizers came,’” Bear explained.

With more than 23,000 registered students, the course and its goal of centring Indigenous worldviews and experiences have clearly resonated with Canadians.

“I’ve tried to think about why so many people are taking it, and I think despite what we read in comments by the trolls on social media, the general public is seeking knowledge from Indigenous perspectives,” Bear said.

Indigenous Canada was created as part of the university’s dedication to increasing Indigenous academic content, and was originally planned to be limited to a for-credit online course solely for University of Alberta students. However, its relevance to a wider population was soon evident, and the intended audience grew.

“Some of the conversations that we have on the MOOC are difficult, people are learning things for the first time,” Bear explained. “Canadians hear a little bit about residential schools from the Truth and Reconciliation Commission, but if you’re seeking any more information you’re not going to be able to get it from the textbooks that are currently in circulation, so this course is an accessible way to learn about that from a trusted source.”

Those difficult conversations happen in lessons such as “Trick or Treaty,” which examines Indigenous and settler perspectives of treaty making; “A Modern Indian?”, a lesson that looks at the burgeoning resistance of Indigenous leaders and the formation of Indigenous-led organizations as the Canadian government employed strategies to encourage assimilation; and “Red Power,” which explores self-government, self-determination and Indigenous resurgence.

For her part, Ward especially enjoyed the section on hope and resurgence.

“(During the MOOC) you talk about all these horrible things that have happened. But there has to be something that is showcasing our resurgence, because there are so many beautiful, complex, amazing things about our diverse communities that people need to know, too,” she said.

Since completing the course, she’s sharing her passion for it.

“Everywhere I go I ask people, have you taken the MOOC? Because I think it’s a good starting point for people, it’s one piece of a larger puzzle, and then if they want they can branch out and start to learn more.”