Portrait of the artist as a young scientist

Laboratory science is just as creative as writing and playing music, according to promising doctoral immunology graduate and musician Dominic Golec. 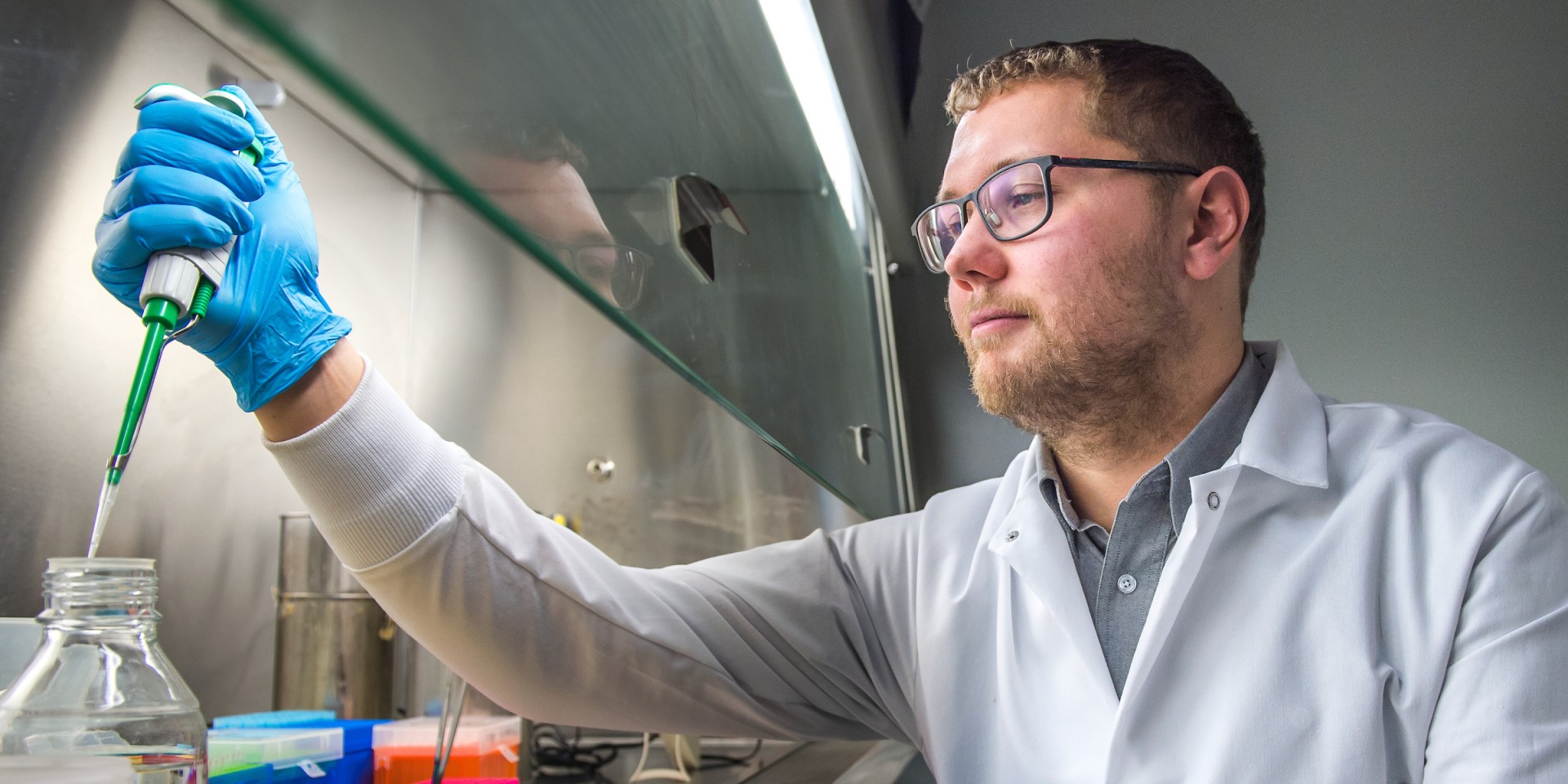 Immunology PhD grad Dominic Golec says science and music aren't as different as they may seem: "There is a great deal of outside-the-box thinking that goes into designing an experiment, and it’s really a creative process."

“You won’t be happy in a career that you don’t love,” said Dominic Golec, a recent doctoral graduate.

The Peace River native knew this to be gut-achingly true the first day of classes after switching faculties in grad school. “I’d graduated with an immunology undergraduate degree but I didn’t really have a vision of my career yet,” he explained.

And though Golec had truly enjoyed working as a lab technician for a year after his undergraduate degree, he felt gently compelled by societal standards to study a field that would give him a concrete career outcome—hence applying and being accepted to a different faculty.

“Part of the rationale for me was that I knew after five years I would have a great job and make X amount of money and not have to worry,” he said. “If I stayed in immunology, the path was less clear.

“But when push came to shove, that first day of class, within half an hour, I knew that field of study wasn’t for me,” he said.

Golec walked out, and that same day dropped out of the program and applied to graduate school in the Department of Medical Microbiology and Immunology—embracing a less clear future for something he truly loved.

The need to express

And the irresistible draw he realized he simply couldn’t live without? The creative freedom of expression Golec experiences working with molecules in a laboratory environment, which may sound a little odd, especially coming from him, given he’s also a musician who records and has been on tour with his band.

“When you are working in the lab, you really have the freedom to test things and explore different ideas. On the surface, a lot of people think science is a cold, sterile environment, but there is a great deal of outside-the-box thinking that goes into designing an experiment, and it’s really a creative process. There’s a lot of fun, bouncing ideas off other people, too,” he added. “After I got a taste of that, it’s really the only thing I saw myself doing.”

The talented musician—who, looking back, appreciates that his “Polish immigrant parents would never have allowed me to attend music school after high school”—draws parallels between the two seemingly different fields.

“There is a powerful connection between music and science for me,” said Golec, who has made a name for himself playing mandolin for the Misery Mountain Boys band, originally busking on Whyte Ave. and Strathcona Market, and working their way into popular local bars like The Needle. They recorded their first eight-track debut album in 2014, Little Smoky, with Riverdale Recorders, the same label as Corb Lund Band and Ian Tyson. Earlier this spring, the band, named after a landmark in Peace River, toured Belgium for one month.

“Both are mediums by which one can express oneself,” he continued. “They are similar in that you need to study and learn the building blocks, but once you have those, you can use them and experiment with them in any creative way you like. It really is using fundamentals to create something bigger than the sum of its parts.”

In the lab, Golec’s creative expression has resulted in some important immunology research breakthroughs, one of which made it into the top five journals in his field in 2017—tantamount to having a song make the top five on a music chart.

“His research is of the highest quality, and one chapter of his work was published in one of the top immunology journals in the world,” said Hanne Ostergaard, associate dean of research in the Faculty of Medicine & Dentistry and one of Golec’s mentors, adding how rare that is for such a young researcher.

Golec’s earlier work identified how one particular family of genes contributes to the development of T cells (our immune system’s top disease-fighting cells) in the thymus, which may help scientists better understand how to prevent our body’s immune system from developing autoimmunity.

Working under supervisor and mentor Troy Baldwin, Golec’s most recent work, which made it into the Journal of Experimental Medicine, takes that one step further by identifying a new thymic progenitor cell subset that gives rise to a unique population of T cells in the small intestine.

She added, “He is one of the best students I have had the chance to interact with. I served on his supervisory committee and I really enjoyed our meetings since they were more like a discussion with a colleague, rather than his committee telling him what he needs to focus on.”

Golec’s authentic enthusiasm for what he does has also caught the attention of others. He recently landed a prestigious postdoctoral position working jointly between the U of A’s Alberta Diabetes Institute and the Alberta Transplant Institute. He’ll be busy expanding on previous world-renowned islet transplantation work, focusing on regulatory T cells that help suppress harmful immune responses after transplantation.

“There’s still a lot of things up in the air about where this will take me. When I look down the road, I could strive for a faculty position, where I could have my own lab and train others. Another outcome could be a biotech job doing research,” Golec speculated.

“But to tell you the truth, I’m just really having a lot of fun grappling with new ideas and playing around in the lab trying to come up with something new and prove it,” he paused, adding, “The best advice I could give anyone is don’t worry about the future too much and whether you should be this or that. It can be hard to turn your back on a sure-thing career path, but for better or worse, I wanted to be a scientist, and you can’t second-guess what you love.”

Portrait of the artist as a young scientist