Power athlete credits colleagues for help with the heavy lifting 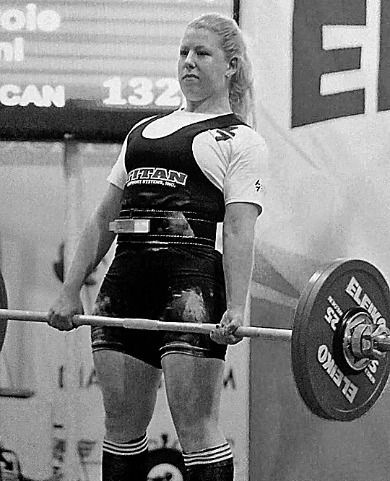 130729-danielle-savoie-deadlift-banner
Danielle Savoie shows her form in the dead lift.

(Edmonton) Even when Danielle Savoie has what seems like the weight of the world on her shoulders, she’s not alone.

The customer service co-ordinator with the Saville Community Sports Centre may have been the only one lifting the weight en route to four silver medals while representing Canada at the International Powerlifting Federation World Classic Championships in Suzdal, Russia, but she says there were many hands on the bar in spirit.

“The people I work with are fantastic,” said Savoie. “It’s been so supportive, whether I want to take more courses, take time off to train or go compete. It’s a very positive work environment, and I look forward to coming to work every day.”

Savoie graduated from the University of Alberta in 2012 with a bachelor of physical education degree and immediately stepped into her role with the Saville Centre.

It wasn’t long after she started with the Saville Centre that Savoie made her initial foray into powerlifting.

“I’ve always had some muscle on me and I love strength sports,” said Savoie, who played football and dabbled in bobsleigh before a knee injury during a rugby game sent her looking for a new challenge. “I thought I would try something that was still a strength sport, but a little bit lower impact.”

Then, nine months ago, a friend invited her to try out the U of A Powerlifting Club. Having worked as a personal trainer on campus while she completed the final two years of her degree, Savoie was no stranger to a weight room.

“I love feeling strong, and the club members are fantastic,” she said. “It’s a great way to meet new members who share the same interest and are interested in healthy lifestyles.”

A natural, Savoie had been training for less than two months when she signed up for the club’s powerlifting meet in December 2012, where she won all three categories—bench press, squat and dead lift—in her weight class.

Savoie then booked her ticket for the world championships just three months later by powering her way to victory at a national competition held in British Columbia this past March.

Once in Russia, Savoie competed in the first-ever classic powerlifting competition, which differentiates itself from the “equipped” category in that classic doesn’t allow for any clothing or supports that enhance the lift.

She endured seemingly unending bus rides and a steady diet of pancakes, potatoes and bacon to earn a steady string of silver medals with a bench press of 75 kilograms, a squat of 112.5 kg and a dead lift of 132.5 kg—all of which were good enough for a second-place finish in the overall category.

“It was interesting, and it was a little intimidating—a lot of these women have been competing for many years,” she said. “It was great to see that calibre of athleticism.