This specimen tightens the linkages between dinosaurs and birds. There are so many components that are essentially indistinguishable from modern birds. 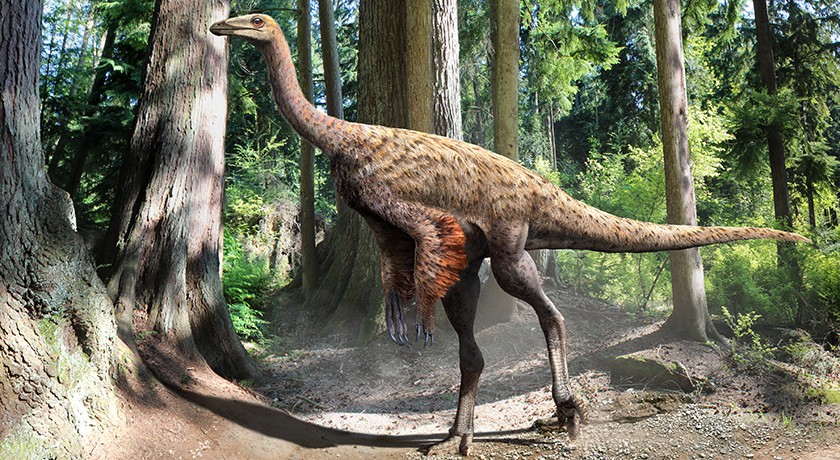 Illustration of Ornithomimus, by Julius Csotonyi, based on the findings of preserved tail feathers and soft tissue.

An undergraduate University of Alberta paleontology student has discovered an Ornithomimus dinosaur with preserved tail feathers and soft tissue. The discovery is shedding light on the convergent evolution of these dinosaurs with ostriches and emus relating to thermoregulation and is also tightening the linkages between dinosaurs and modern birds.

“We now know what the plumage looked like on the tail, and that from the mid-femur down, it had bare skin,” says Aaron van der Reest. This is the first report of such preserved skin forming a web from the femoral shaft to the abdomen, never before seen in non-avian dinosaurs. “Ostriches use bare skin to thermoregulate. Because the plumage on this specimen is virtually identical to that of an ostrich, we can infer that Ornithomimus was likely doing the same thing, using feathered regions on their body to maintain body temperature. It would’ve looked a lot like an ostrich.” In fact, this group of animals—referred to as ornithomimids—is commonly referred to as “ostrich mimics.”

Although the preserved feathers are extremely crushed due to sediment compaction, scanning electron microscopy reveals a three-dimensional keratin structure to the feathers on the tail and body. Van der Reest made the initial discovery during his first year as an undergraduate student, supervised by Philip Currie, Canada’s leading paleontologist. “It’s pretty remarkable. I don’t know if I’ve stopped smiling since.”

This new specimen—one of only three feathered Ornithomimus specimens in the world—is shedding light on the animal’s evolutionary adaptation to different environments. “We are getting the newest information on what these animals may have looked like, how they maintained body temperatures and the stages of feather evolution.” Van der Reest notes that the findings may be used to further understand why animals have adapted the way they have and to predict how animals will have to adapt in the future to survive environmental changes.

“This specimen also tightens the linkages between dinosaurs and birds, in particular with respect to theropods,” says Alex Wolfe, second author on the paper. “There are so many components of the morphology of this fossil as well as the chemistry of the feathers that are essentially indistinguishable from modern birds.”

The discovery may also alter future excavation techniques, explains van der Reest. “If we can better understand the processes behind the preservation of the feathers in this specimen, we can better predict whether other fossilized animals in the ground will have soft tissues, feathers or skin impressions preserved.”

The findings, “A densely feathered ornithomimid from the Upper Cretaceous Dinosaur Park Formation, Alberta, Canada,” were published in the journal Cretaceous Research.