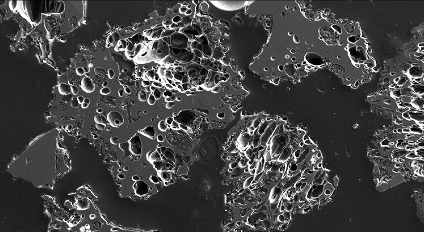 Microscopic image of a sample of White River Ash from the Yukon. The picture is of a polished surface of the pumice grains mounted in epoxy, which is how the samples are prepared for analysis.

UAlberta-led research shows that a distinct deposit of volcanic ash originating in Alaska also appears in the Greenland Ice Sheet and across northwestern Europe. 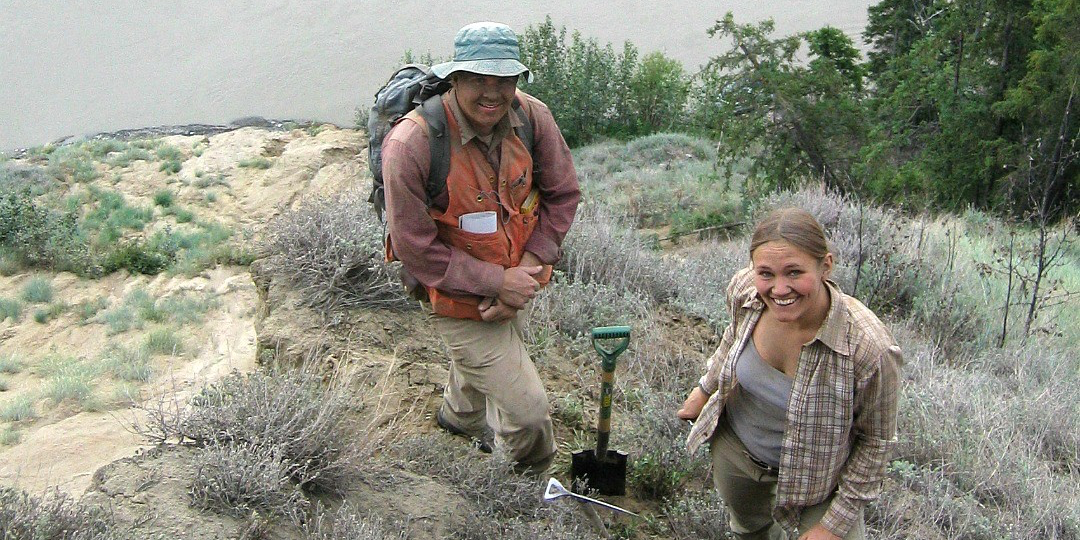 Digging for research paydirt: Duane Froese (left) and Britta Jensen on the hunt for volcanic ash above the Yukon River.

(Edmonton) A new study led by University of Alberta researchers has shown that a volcanic eruption 1,200 years ago scattered ash from Alaska to Europe—a discovery that will help researchers understand how future eruptions could affect the world.

Britta Jensen and Duane Froese in the U of A's Faculty of Science led the research, which showed that a distinct deposit of white, sand-sized grains of volcanic ash visible just below the modern forest floor over much of the Yukon and southern Alaska is present not only near the originating Mount Bona-Churchill in Alaska, but also in the Greenland Ice Sheet and across northwestern Europe.

The deposit, commonly known as the White River Ash, is so prominent that locals sometimes refer to it as "Sam McGee’s Ashes" in reference to the Robert Service poem.

As part of the study, samples of the White River Ash, along with ash previously assumed to be from Iceland, were gathered from northern Canada, eastern North America, Greenland, Northern Ireland and Germany. By comparing characteristic features of these samples, the researchers showed that all of the ash originated from the same large prehistoric volcanic eruption in Alaska about 1,200 years ago.

Ash beds, known as tephra, are important to researchers because they take just days to weeks to deposit—which creates precise links between geologic records. As a result, each ash bed represents a specific moment in time, and provides important insights into the frequency and effects of moderate to large volcanic eruptions.

Although it was generally thought that only rare "super eruptions" were capable of spreading volcanic ash across more than one continent—only the exceptional eruption of Toba (Indonesia), which occurred 75,000 years ago, has a proven ash distribution equal to the White River Ash—Jensen says this research illustrates that more frequent and moderate-sized eruptions can also lead to intercontinental distribution.

"It’s possible that the perceived lack of other similar intercontinental correlations is not because they are rarer, but because scientists simply have not expected relatively smaller eruptions to be capable of distributing ash on this scale," she says. "This has direct implications for volcanic dispersal studies with the correlation of widely distributed geologic records and volcanic hazard assessment.

"Given the social and economic impact of the 2010 eruption of Eyjafjallajökull, it is critical to more effectively integrate geologic records of past eruptions in volcanic hazard assessments to understand the potential for impact."

The study was published this week in the journal Geology.