Indira Samarasekera elected as foreign associate of National Academy of Engineering, one of the highest professional distinctions for engineers. 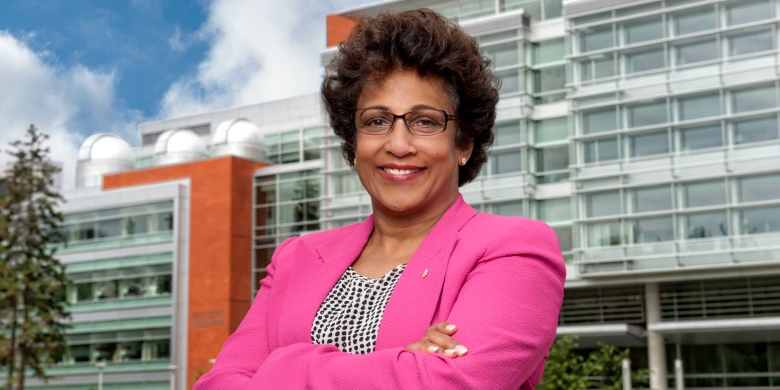 (Edmonton) University of Alberta President Indira Samarasekera has joined some elite company after being elected as a foreign associate of the National Academy of Engineering.

Election to the United States-based organization is among the top professional distinctions available to engineers. Membership honours those who have made “outstanding contributions to engineering research, practice or education,” and who have pioneered new and developing fields of technology that advance engineering and education.

“I am deeply honoured and truly humbled that an esteemed organization such as the National Academy of Engineering would recognize my work with such a rare distinction,” said Samarasekera, internationally renowned as one of Canada’s leading metallurgical engineers.

“As much as this honour comes with great personal and professional satisfaction, no important endeavour is accomplished in a vacuum. Throughout my career I have had the fortune to work and learn alongside some remarkable individuals, and that includes some truly great talent at the U of A, without whom this would not have been possible.”

Samarasekera is one of only 29 Canadians who have been elected to the NAE since it was founded in 1964. The honour recognizes Samarasekera’s work to advance the mechanistic understanding of steel casting processes for improved productivity.

Her induction into the NAE is the latest accolade in a career that includes a Fulbright-Hays Scholarship as a master’s student at the University of California, the E.W.R. Steacie Memorial fellowship in 1991—awarded by the Natural Sciences and Engineering Research Council of Canada to the top four researchers under 40—and an appointment as an officer of the Order of Canada in 2002. Most recently, she received a Queen Elizabeth II Diamond Jubilee Medal in 2012.

After earning her master’s in science in 1976, Samarasekera went on to the University of British Columbia, where in 1980 she completed a PhD in metallurgical engineering and later entered the professoriate. While at UBC she held the Dofasco Chair in Advanced Steel Processing and also served as vice-president of research.

Samarasekera came to the U of A in 2005, becoming the institution’s 12th president and vice-chancellor.

U of A distinguished alumnus also elected

Joining Samarasekera among this year’s inductees is U of A alumnus Lubomyr Romankiw, who was recognized for his innovation of thin-film magnetic head structures and electrochemical process technologies for microelectronics device fabrication.

Romankiw graduated from the U of A in 1955 with a degree in chemical engineering. He went on to a long and distinguished career at IBM’s T.J. Watson Research Center in Yorkton Heights, New York, where his innovations and co-invention with IBM colleague David Thompson revolutionized computer memory.

In 2012, Romankiw received the U of A’s Distinguished Alumni Award, recognizing his outstanding accomplishments and international prominence in chemical engineering.