On her final day as president, Indira Samarasekera reflects on her chapter in the story of a great university for the public good. 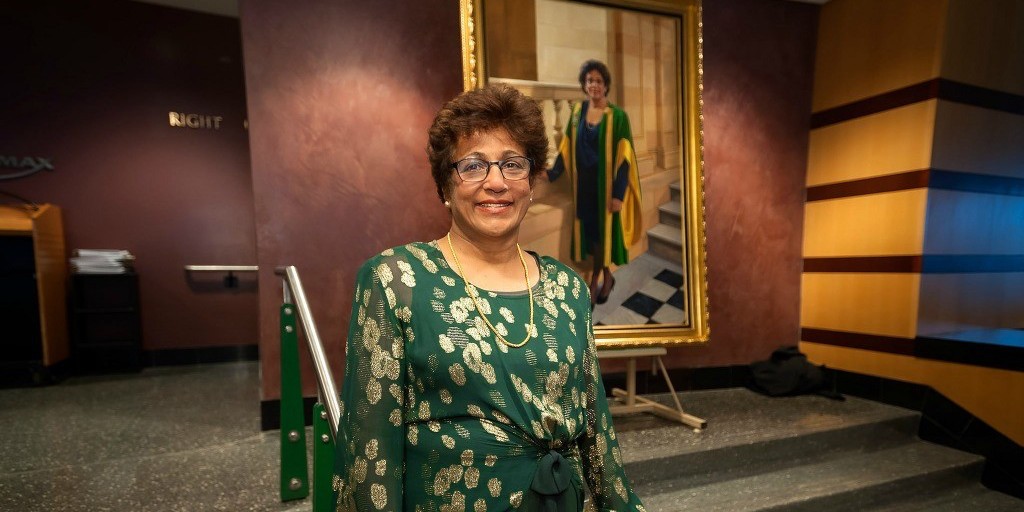 President Indira Samarasekera with the portrait she received during a gala evening last April honouring her contributions to the University of Alberta community, the city of Edmonton and the province.

(Edmonton) When Indira Samarasekera took on the University of Alberta’s top job in 2005, she knew from her own experience as an academic and a senior administrator that she was coming to an exciting place built on world-class minds, capacity and boundless possibilities. What she wasn't sure of was her new home's story.

“I knew we had the talent, we had the capability and we had the great people, but what we didn’t know was the difference the University of Alberta was making in Alberta and Canada,” says the outgoing U of A president, whose last day is June 30. “I also got the sense that we somehow didn’t have the strength to attract the best and brightest academics.

“Do you know what it was about? It was a reflection of not knowing what our story was—we could not tell the story of the University of Alberta.”

Without a story to tell, Samarasekera says, the U of A’s standing on the world stage suffered. Evidence of the resulting reputation deficit came early in Samarasekera’s administration, when she remembers the difficulty of getting an audience with the heads of a couple of India’s top universities. “They looked at us like, ‘Who are you?’”

Before the U of A could set about boosting its reputation, Samarasekera says, the university had to figure out what exactly this institution was.

“What set it apart from its peers in the country? What did we do well? Why should students and professors come here? And what difference were we making? Those were some of the questions I felt needed to be answered.”

Samarasekera took those questions to university stakeholders; the result was the Dare to Discover vision.

“It created the kind of energy and inspiration that people could see themselves in,” she said of the document that would define her presidency. “Everybody could see how they could contribute to the making of Dare to Discover. It wasn’t prescriptive, but rather transformative and inspirational.”

With the U of A coming up on its 2008 centenary celebrations and in the midst of a $300-million fundraising campaign, Samarasekera's next step was to shore up the storytelling arm of the university. She advocated for a split of the former external relations portfolio into two distinct offices, university relations and advancement, so the needs of their individual audiences could be better addressed. She also called for an overhaul of the U of A website. “The most important real estate the university has today is not the buildings or the campus, it’s our website—it is our window to the world.”

With a clear vision in hand and a bolstered storytelling platform, 100 years’ worth of university successes lived and breathed once again as the centenary celebrations catapulted the U of A onto the national and international stage.

“I was so proud of the centenary. It enabled us to see what our story was and to tell it well.”

The tale that emerged was of an institution whose roots are set in the notion that knowledge is about “uplifting the whole people,” words that dated back to the U of A’s founder and first president, Henry Marshall Tory, Samarasekera says.

“Our mission to uplift the whole people and be relevant is illustrated in the fact that this province’s energy industry and agriculture sectors, even the health-care system and the province’s arts and culture, have all benefited from the presence of the University of Alberta.”

It also told of a university that, in her words, stood for making “ordinary people extraordinary.”

“By virtue of our geography, our reach has been remarkable in attracting students from all over the province. We have been a beacon for students from very diverse backgrounds, and I think we still stand for that. We are a destination.”

Destination indeed. The numbers of international students who want to come to the U of A have surged during her tenure, and the U of A’s aggressive international agenda is the envy of Canada. “We have better, stronger institutional partnerships than any other Canadian university. We are partners with major research organizations in Germany, in China, in France, and I'm especially proud of India. Today, those top three Indian institutes of technology regard us as one of their top partners, along with MIT and Cambridge.”

The list of the university's achievements under Samarasekera's decade of daring are too many to list. Highlights include championing unprecedented growth of faculty, programs and facilities (more than $2 billion in capital projects), overseeing the billowing of the university's endowment past the $1.2-billion mark, and spearheading the creation of the Peter Lougheed Leadership College—“I am so pleased that we have something to honour one of the province’s heroes and that I could do it while I was president.”

She also leaves the university with a reputation that firmly places the U of A among the top five universities nationally and top 100 internationally.

Set to head back to the West Coast to take stock of the last 10 years, which she has described as the best 10 years of her life, Samarasekera says she'll miss Alberta’s big blue sky—“there is a magic about this beautiful sky”—the province's canola fields in the summer, the Rocky Mountains, and the friendships and the warmth that so many have offered her.

“What I will miss most, I think, is the opportunity to make a difference every day. When you put your mind to it, you can affect others in a very positive way.”