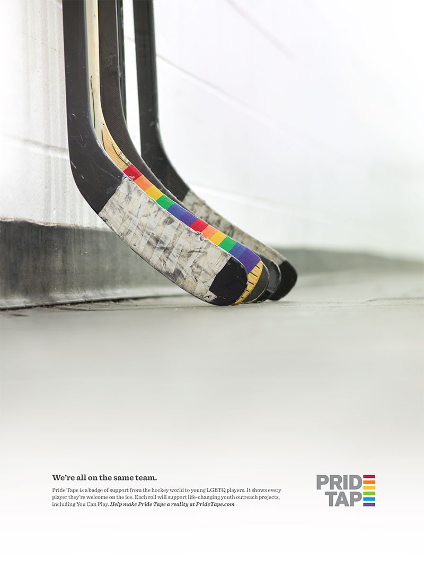 We believe these six colours will help change the world of team sports. It’s a badge of support from the hockey community to LGBTQ youth. 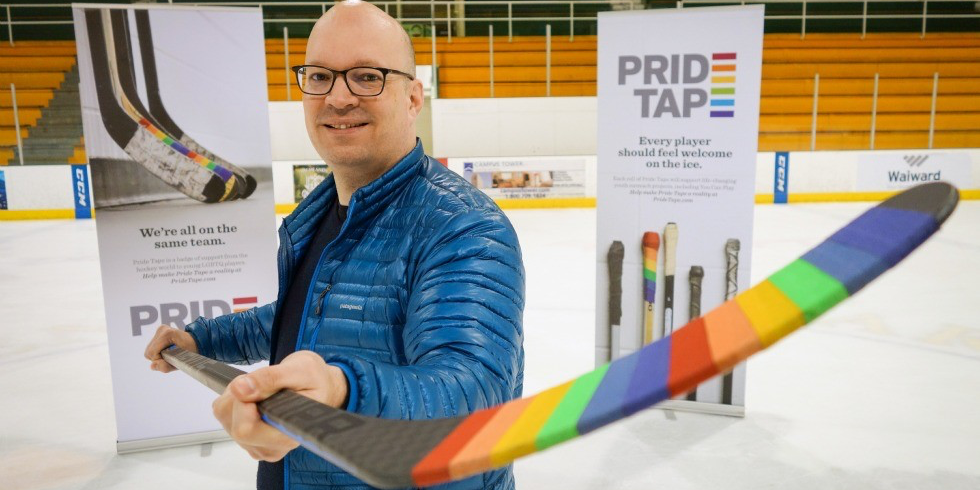 Kris Wells says Pride Tape is a way for athletes of all ages and skill levels to show their support for LGBTQ people in sport.

Great moments in hockey often end with a stick tap to show appreciation for another player’s on-ice performance. Add in the six colours of pride, and you have the potential for one magnificent stick tap to LGBTQ youth—from the entire hockey community.

Pride Tape debuted to the world Dec. 17 as part of a campaign to overcome discrimination and welcome LGBTQ youth to hockey and sport. An initiative of the University of Alberta’s Institute for Sexual Minority Studies and Services, or iSMSS, Pride Tape will initially be manufactured for hockey, but will also be produced for other sports.

“We believe these six colours will help change the world of team sports. It’s a badge of support from the hockey community to LGBTQ youth,” said Kris Wells, faculty director of iSMSS and an assistant professor in the Faculty of Education.

Pride Tape is the result of a long-standing partnership between iSMSS and Edmonton-based Calder Bateman Communications, the creative team behind the acclaimed “No Homophobes”campaign that drew the world’s attention to the use of homophobic language.

Wells said Pride Tape is a way to advance that conversation, and in the world of sport in particular, considered one of the last bastions of homophobic discrimination for many LGBTQ youth. By taping a hockey stick in the rainbow colours of pride or wearing a decal, any member of the hockey community—at any level—can signal they are an ally, he said.

A Kickstarter crowdfunding campaign launched Dec. 17 to raise $54,000 to produce and distribute an initial 10,000 rolls of Pride Tape, a professional-quality hockey tape. Once manufactured, a portion of Pride Tape will be distributed for free to local teams across Canada and beyond, with tape also available for sale to the public.

Profits raised through the sale of Pride Tape will be split 50/50 between iSMSS and another partner organization, the You Can Play Project, which also aims to break down barriers for LGBTQ athletes in sport.

Wells said he’s been amazed by the initial response to the campaign. Global TV produced a commercial promoting Pride Tape and all major Canadian TV networks have committed to airing the spot—at no cost. NewAd has also agreed to display Pride Tape posters in restaurants and bars across the country.

“The enthusiasm has been remarkable and these have all been for free—people really believe in the power of this concept,” Wells said.

That supporting cast of allies includes Edmonton Oilers defenceman Andrew Ference, who once again lent his support and status as a hockey hero in the Pride Tape TV spots. Earlier this year, Ference and several U of A Golden Bears and Pandas athletes supported iSMSS’s partnership with You Can Play with a promotional video.

Golden Bears hockey captain Kruise Reddick credited initiatives like Pride Tape and You Can Play for bringing crucial awareness to the issue of LGBTQ discrimination in sport, and in hockey in particular.

LGBTQ athletes have come out publicly in sports such as basketball, football, rugby and boxing, but not in hockey’s top professional ranks. Reddick says it’s just a matter of time before that happens in the NHL.

“Hockey is a game of inclusion of everyone. It’s a game that’s supposed to promote healthy lifestyles and active living. Anyone should be welcome to play hockey.”

Canada’s game and the hockey hotbed of Edmonton are only a starting point for Pride Tape, Wells said. If successful, the concept could expand to any sport that uses tape, from golf to tennis to baseball.

Wells called Pride Tape a “quintessential Make Something Edmonton” project emblematic of the kind of support iSMSS receives from the campus and local communities. Pride Tape is a strong example of the U of A using research to help with social change, he said.

“Our new president [David Turpin] has talked about the importance of us thinking about the university benefiting the public good and getting out not just in our local community, but also in our province and country. This is something, a concept and a product, that can be used everywhere.”

Giving in to your kid’s desire for an unhealthy snack may improve your own eating choices, a new University of Alberta study shows. The research, published in Appetite, showed that parents and …
Read more from this release

What is mental toughness? Is it dogged determination? Razor-sharp focus? Supreme confidence? Or is it being cool, calm and collected under fire? Turns out, it’s all these things—and it provides a …
Read more from this release

Virtual assistants don’t yet live up to their considerable potential when it comes to providing users with reliable and relevant information on medical emergencies, according to a new study from …
Read more from this release