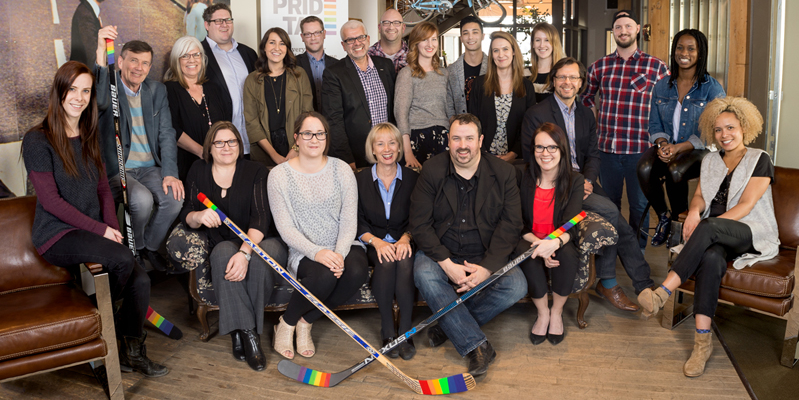 During the 1991 Stanley Cup playoffs, Pittsburgh Penguin Kevin Stevens hurled the 'other f-bomb' at Minnesota North Stars forward Brian Bellows. No one in the NHL raised an eyebrow over the homophobic slur, or called for a suspension.

In fact, that incident, which was caught on video and eventually shared online, gained notoriety among bloggers and on hockey chat forums as a funny example of players chirping an opponent during the heat of a game.

Contrast that with this year’s playoffs, when Chicago Blackhawks forward Andrew Shaw earned international scorn—and a one-game ban—for throwing the same homophobic slur at a member of the St. Louis Blues (also caught on camera). The next day, a contrite Shaw fought back tears when he stood before the media and apologized—pledging to “never use that word again.”

Both incidents demonstrate how attitudes have changed—and just how far we still have to go to ensure sport is inclusive for all athletes.

“It really shows that the NHL and other professional sports are taking the issue of casual homophobia seriously, recognizing the kind of culture they don’t want to create or condone,” says Kris Wells, faculty director of the University of Alberta’s Institute for Sexual Minority Studies and Services (iSMSS).

“Many athletes are big role models, so it’s important that they recognize that behaviour is inappropriate, that this doesn’t have a role in sport. That’s probably the most powerful message an athlete can deliver.”

Wells is also co-founder of Pride Tape, a partnership between iSMSS and Edmonton communications firm Calder Bateman. A beautiful concept for its simplicity and impact—rainbow hockey tape that represents the six colours of pride—Pride Tape is a badge of support from the hockey community to LGBTQ youth in sport.

Pride Tape captured the world’s attention when it debuted to the public last December, and again earlier this year when the Edmonton Oilers became the first NHL team to use the tape at the team’s annual skills competition.

A tight-knit team of Calder Bateman employees worked tirelessly for months to make Pride Tape a reality, from conceiving the original concept and sorting out the logistics of producing the tape to working with media partners and overseeing the Kickstarter campaign that raised $76,000 to manufacture the first 10,000 rolls.

“As an entire company, all of the staff members at Calder Bateman are extremely proud of this award,” says Jeff McLean, Calder Bateman’s creative director, who came up with the Pride Tape concept. “It’s nice when you can make a difference out there and have people talk about something you’ve worked on that is impacting people’s lives in a positive way. It’s always nice to win awards, but to do both is really special.”

McLean says he feels privileged to have worked on such an important project with iSMSS and the U of A, and obviously Wells in particular. To see Pride Tape resonate so strongly with the hockey community at all levels, from the professional ranks to the grassroots, has been a particular point of, well, pride.

The UAlberta Advocate Award also recognizes Calder Bateman’s efforts supporting the U of A through the NoHomophobes.com project. Another partnership with Wells and iSMSS, NoHomophobes.com is a website that raises awareness about the prevalence of casual homophobia on social media by tracking, in real time, slurs such as “faggot,” “dyke,” “that’s so gay” and “no homo” shared on Twitter.

Since its launch in 2012, NoHomophobes.com has been used by the You Can Play Project as a training tool for professional athletes to talk about the impact of casual homophobia and how locker-room language can breed a hostile, negative climate for LGBTQ players.

Through their work on both campaigns, Calder Bateman contributed more than $200,000 of in-kind donations to iSMSS.

Wells calls both campaigns “made-in-Edmonton success stories” that demonstrates the power of university-community partnerships that address an issue—opening eyes and hearts and challenging minds to think differently. Campaigns like Pride Tape are more than just wrapping a hockey stick in rainbows; it’s about starting the conversation, he says.

“Social change isn’t going to happen when research stays on a page. It needs to be translated into everyday kind of language and action.”

Attend the Community Connections Awards on May 2

Calder Bateman will be recognized at a ceremony at Edmonton City Hall at noon on May 2, along with two other recipients: nutrition professors Rhonda Bell and Catherine Chan, winners of the Community Scholar Award; and the Sexual Orientation & Gender Identity Advocacy Committee in the Faculty of Medicine & Dentistry, winner of the Community Leader Award. Everyone is invited to attend the awards ceremony.