Prime farmland continues to be lost to urban expansion 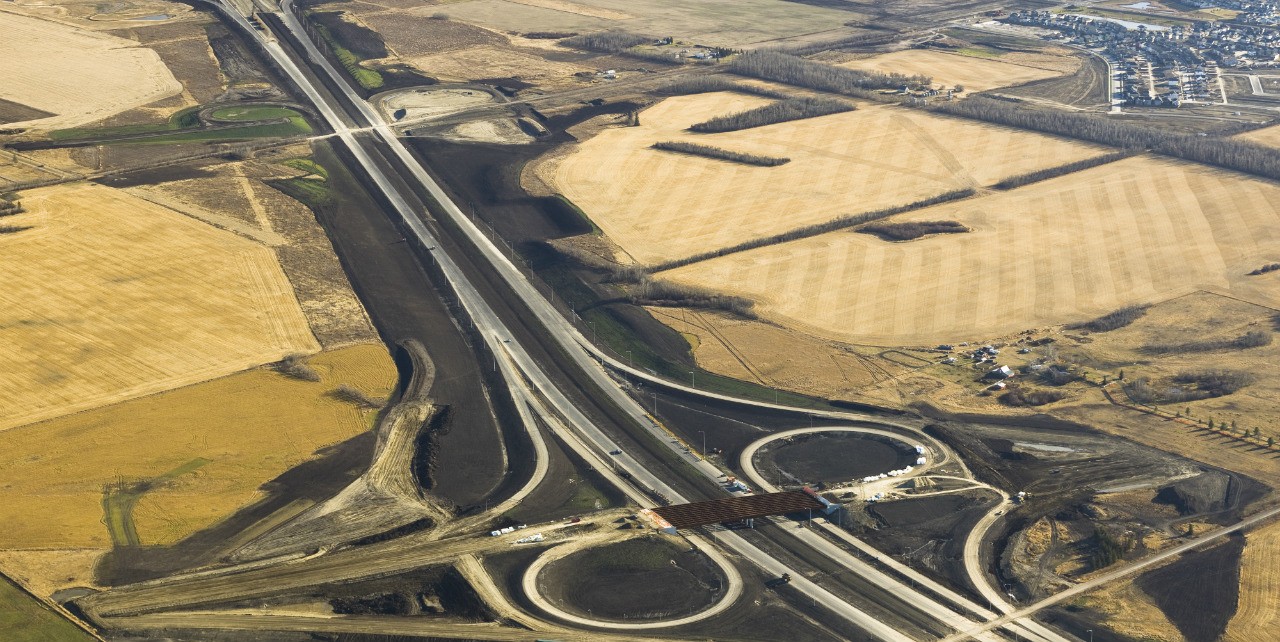 High-quality Alberta farmland is being lost to urban development driven by factors like population growth and expanded roadways for rural subdivisions, according to a new report. (Photo courtesy Alberta Land Institute)

Alberta’s municipal governments need to be more careful about allowing prime farmland to be gobbled up for residential and industrial use, according to a new report out of the University of Alberta.

The report shows that high-quality agricultural land in the province’s most populated areas continues to be lost through rezoning, and calls for land-use policies that consider longer-term impact.

“Municipal governments have to come to grips with what they want their communities to look like in the future,” said Brent Swallow, one of the report’s co-authors and a professor in the Faculty of Agricultural, Life & Environmental Sciences. “Just having cheap services financed through extra tax revenue is not enough of a goal. It’s short-term gain with long-term costs.”

The research, compiled by Swallow and fellow researchers at the U of A-based Alberta Land Institute, shows that between 1984 and 2013, the amount of land with urban or industrial uses in the corridor between Edmonton and Calgary jumped by 52 per cent, increasing by more than 1,600 square kilometres. Between 2000 and 2012, about 35 per cent of the converted land was classified as rich, top-rated cropland, with another 34 per cent rated second highest in quality in Alberta.

The loss of the prime agricultural land was driven by several factors including population growth, rising prices for agricultural land driven by urban demand, expanded road networks to service rural subdivisions, and fragmentation of the rural landscape as more acreages were built.

That loss will have long-term economic, environmental and visual impacts on the land, Swallow said.

Neighbouring municipalities need to work together to develop co-ordinated land-use plans and taxation formulas instead of competing with one another, to avoid the creeping development of unattractive pockets of light industry plopped next to residential estates, Swallow said.

“There are rural municipalities in Alberta that want to maintain their rural character, but they’re so heavily developed, it doesn’t look like it. If they’d worked with their neighbours, it could have been different.

“We forgo opportunities for the landscape to remain beautiful for future generations,” he said.

Decisions based on revenues

Municipal governments tend to still base their land-use philosophy on policies developed in the 1980s and 1990s, Swallow added.

“There’s been this ethic of growth, that it’s good, it means more tax revenue, more services for the population. They see that growth in terms of impacts on public finance,” he explained.

The downside, though, is the costs that come with increased expansion.

“If you have scattered rural residences, that means you need expanded school bus services and more road maintenance. That’s a burden for the future taxpayer,” said Swallow.

Councils are starting to realize they face these related issues, but the temptation is still there to make rezoning decisions that can be inconsistent with their own growth plans for allowable land uses, Swallow noted. Under the Alberta Land Stewardship Act and the Municipal Government Act, local governments are responsible for developing land-use plans and designating allowable land use—agricultural, light industrial or country residential, for instance—but don’t always stick to them, Swallow said.

“They want to keep it for these uses, and then a proposal comes along for a use outside that zoning and they’ll approve it.”

Loss of farmland is an issue that’s also gaining ground with the general public, Swallow said. A survey of 320 urban and rural residents in the Alberta Capital Region showed it was important to preserve agricultural land for air quality, clean water and scenic beauty, and for food production for both local and global markets. About 80 per cent of respondents said they’d be willing to pay a $20 one-time fee towards farmland conservation, and more than 50 per cent said they’d pay $300. They were willing to contribute most to conserving land for growing vegetables, then for rolling grasslands used for livestock grazing, followed by use as cropland and hayland.

“That could build a pool of funds for conservation efforts, and it indicates that municipalities should take steps to preserve prime farmland.”

Swallow and other researchers at the Alberta Land Institute are now working with municipalities to develop better planning tools, such as land-use and boundary mapping that illustrates how past land designations played out, to inform their decisions about land-use planning and redesignation.

“They can use and share these tools with their tax assessment, agricultural and environmental staff to think through the bigger challenges and consequences of land-use change. Right now we are finding that they operate in separate spheres, often using different planning tools,” Swallow noted.

He’s optimistic that change will come. In 2008, the provincial government passed the Alberta Land Stewardship Act to encourage planning around main watershed areas. More recently, the Municipal Government Act was updated to push communities to take steps toward preserving prime agricultural land and require them to develop plans with their municipal neighbours.

Prime farmland continues to be lost to urban expansion