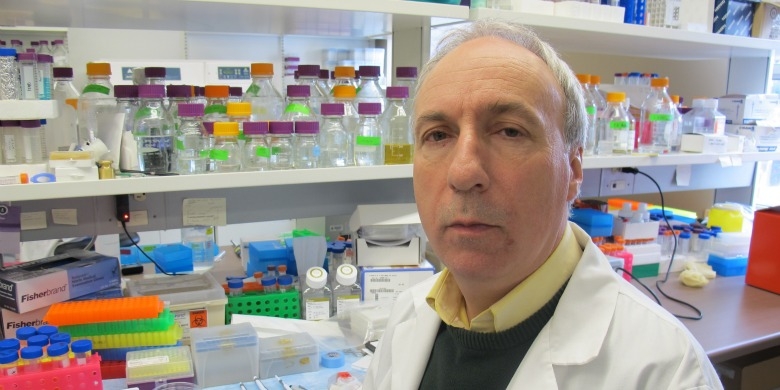 (Edmonton) Medical researchers in Canada and the United States recently published their joint findings that fatal prion diseases, which include BSE or “mad cow disease,” have a hidden signature.

Findings published this month in the peer-reviewed journal, Public Library of Science (PLoS) Pathogens, demonstrate that up to seven months before an animal shows physical signs of having a prion infection, a particular prion protein in the brain was eradicated. This member of the prion family is known as shadoo protein.

“What we discovered is that as the early prion disease process unfolds in an infected brain the shadoo protein is simultaneously disappearing,” said lead author and co-principal investigator, David Westaway, a researcher in the Faculty of Medicine & Dentistry at the University of Alberta.

“This is telling us there is a process within the disease that we were previously unaware of, a process that is happening before the infected animals are getting sick. It’s telling us that the brain cells are more active in defending themselves than we thought. The brain cells are in fact trying to get rid of the prion protein, and as a consequence, this bystander shadoo protein is being destroyed unintentionally.

“This finding suggests that prion diseases are dynamic and not necessarily unstoppable, that there could be a cellular process trying to destroy the infectious prions as they appear. And if we could help that process a little bit more, that might be an avenue to attenuate the disease.”

Westaway, who works in both the Division of Neurology of the Faculty of Medicine & Dentistry and the Centre for Prions and Protein Folding Diseases at the U of A, collaborated with a team of researchers from Ontario, the University of California, the Institute for Systems Biology in Washington, the McLaughlin Research Institute in Montana and a researcher in Germany on this discovery.

The same day this paper was published, very similar findings were published by a team of researchers from the University of California, which demonstrates “these new chemical changes are a concrete and reproducible hallmark of prion disease,” says Westaway.

Co-principal investigator George Carlson, from the McLaughlin Research Institute, added that “given shadoo may be destroyed by a process that actually targets infectious prions, it was surprising that when we increased the amount of shadoo in laboratory models, the course of disease was not changed. We need to understand why.”

The next step for Westaway’s research team is to determine why this shadoo protein is disappearing. The finding opens up a new window of research opportunities.

“We need to better understand this. We want to solve this mystery,” he says.