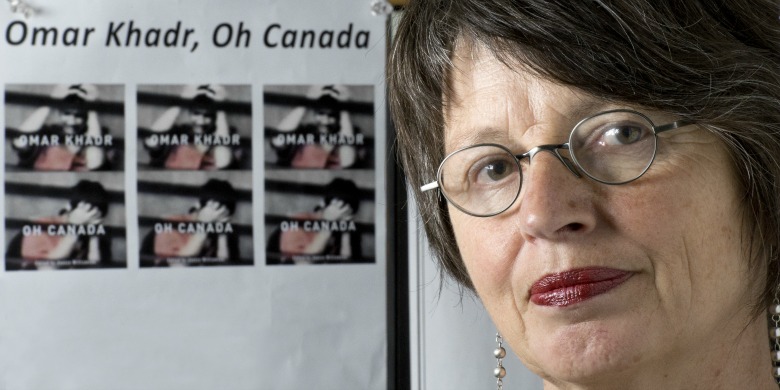 (Edmonton) The timing of Janice Williamson’s new collection of writing on Omar Khadr couldn’t be better. Now that Canada’s infamous child soldier has returned to Canada to complete his sentence for alleged war crimes, it is perhaps more important than ever to take stock of what his 10-year detainment in Guantanamo Bay says about us as Canadians.

As the U of A English professor stresses in the introduction to Omar Khadr, Oh Canada, we need to come to terms with why—when every other country with prisoners at Guantanamo was eager to bring them home—Canada was the only nation resisting repatriation of its solitary prisoner, despite the fact that Canadian courts have deemed some of the evidence against him as tainted.

On Oct. 16 the United States Court of Appeals for the District of Columbia Circuit threw out a charge of material support for terrorism against Osama bin Laden’s driver, on the grounds that no such violation of the international law of war existed at the time of his arrest. The decision could mean that war-crime charges against Khadr, filed when he was only 15, will be found similarly spurious, perhaps paving the way for his release here in Canada.

In Williamson’s estimation, that release would mark a high point for international justice, but such apparent closure would hardly mean our soul-searching should end. Indeed, she says, the extraordinary case provides “a space in which to explore the social and cultural construction of the Muslim man in Canadian society.

“The phrase ‘Oh Canada’ is a direct address that asks us to reflect on what has been done in our name during the era of Omar Khadr, not only to the person but also to our country,” she writes. “‘To what world am I being released?’ Omar asked in 2010—and, we might add, to what country?”

To tease out the disturbing nuances of Khadr’s detention, Williamson assembled an impressive chorus of some 30 voices, including Canadian senator Roméo Dallaire, distinguished author George Elliott Clarke, child labour activist Craig Kielburger, journalist Rick Salutin and the U of A’s own expert on children of war, political scientist Andy Knight.

But the book is more than the usual assemblage of scholarly papers. Covering a vast range of multidisciplinary perspectives, it also includes creative imaginings of Khadr’s predicament—personal reflection, poetry, even a one-act play about his 2003 interrogation.

“Why include poetry, a screenplay and imaginative essays in a book that could easily be confined to analysis and ‘the facts?’” asks Williamson. “Because poetry puts language itself into relief, and literary prose narrates events and affective patterns that can articulate connections between individual stories and cultures.”

Many of the contributions in the collection challenge the reader to see Khadr’s treatment as more than an anomaly of political circumstance or the confluence of bad luck and misunderstanding.

For Canadians, adds Williamson, Khadr became “an absent presence—the terrorist boy exiled to a nightmare prison outside domestic and international law. His abject life in that no-man’s-land called Guantanamo helped us maintain our virtuous innocence. We could hear of his torture but hold him at a distance so far away.”

There is also the question of whether Khadr’s treatment reveals a dark, Islamophobic spectre inherent in Canadian multiculturalism, heralding a two-tier legal system where, writes Williamson, “second-class citizens are denied access to the rights and privileges of full citizens.”

Jasmin Zine of Wilfrid Laurier University concludes that Canadian multiculturalism is a dangerous failure because it has “not provided a guarantee for equality or acceptance and instead serves as a masquerade obscuring the relations of racialized power and privilege that shape the nation.”

Though Khadr may have seemed conveniently out of sight and mind for the past decade, there is no escaping the tough questions now that he has returned to home soil. As the debate over his fate rages on, Omar Khadr, Oh Canada helps frame some of those questions in the widest terms possible.