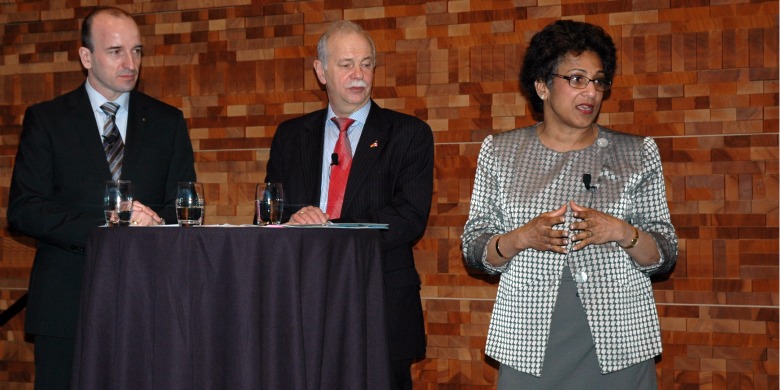 (Edmonton) A partnership between the University of Alberta and Germany’s Helmholtz Association is dedicated to a long-term collaboration to solve energy and environment issues. That was the message delivered to some 100 attendees at a press event at the recent American Academy for the Advancement of Science conference in Vancouver.

U of A President Indira Samarasekera and Helmholtz President Jürgen Mlynek spoke of the need for international co-operation on issues of mutual importance and of solid partnerships that seek solutions to local and global concerns.

The Helmholtz Association is Germany’s largest scientific research organization, with more than 31,000 staff working in 18 scientific-technical and biological-medical research centres. The U of A has been partnered with the association since 2009.

“Helmholtz wants to solve problems; we want to solve problems,” said Samarasekera. “It’s much better to get a partner that has a complementary but a somewhat bigger breadth of skills. They will help us advance and apply knowledge in a way that I don’t think many organizations or universities would have.”

She spoke of the partnership’s key areas�exploring geothermal energy, carbon capture and storage, water treatment, land reclamation and heavy oil upgrading�and their relation to energy and the environment, adding Helmholtz’s experience with geothermal energy is of particular interest to Alberta.

Mlynek said the overall goal of the partnership is ultimately to reduce man’s impact on the environment.

He said last year’s nuclear disaster at Japan’s Fukushima plant in the wake of an earthquake and tsunami has given new impetus to move toward renewable energy.

“In Germany, after Fukushima, there was a decision to get out of nuclear energy by 2022,” he said. “There is now new momentum (in the field of renewable energy), so we are interested in renewables and the efficient use of energy and energy conversion.”

As the topic turned to Alberta’s oilsands, Samarasekera said the biggest challenges and opportunities that need exploring are tailings ponds, land reclamation and greenhouse gas emissions.

“What’s exciting about it is that it’s not about the oilsands, it’s about energy worldwide,” she said. “It’s broader than the oilsands, but the oilsands is a particular opportunity because there are some 170 billion barrels of oil located subsurface that’s going to be needed to bridge to a low-carbon, fully renewable energy future.”