Professor heads for Sochi as chief physician for Team Canada 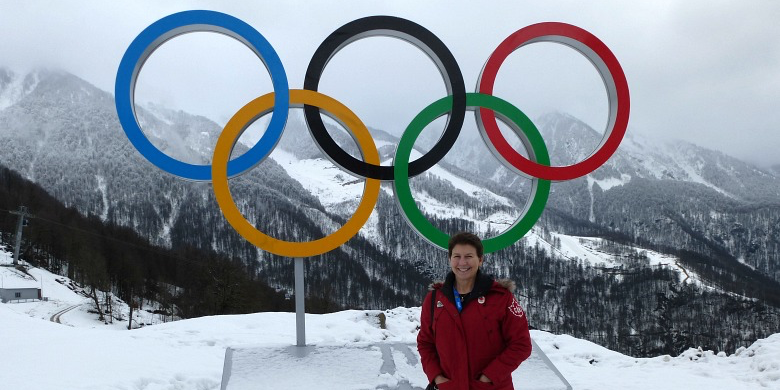 Connie Lebrun stands before the Olympic rings in Sochi, Russia.

(Edmonton) Once you’ve been to the Olympics, the flame never dies. At least that’s how Connie Lebrun—chief physician for the Olympic team and professor of family medicine at the University of Alberta—sees it.

Regardless of your role, whether athlete or support staff, nothing beats working in a fast-paced, high-performance environment where everyone is reaching for gold, says Lebrun, who is also a consultant sports medicine physician at the Glen Sather Sports Medicine Clinic.

“People at the Olympics are trying their very best to be their best, and we are as well,” she said while waiting for the plane to Sochi, where she was to begin unpacking crates of medical supplies upon arrival.

Lebrun’s Olympic journey began when she played for the Canadian women’s volleyball team at the Montreal Summer Games in 1976, and her first foray on the Olympic medical team came in 1996 in Atlanta. But she’s been part of the Canadian medical team at numerous international sporting events over the past 25 years, including three Summer Olympics in Sydney (2000), Athens (2004) and Beijing (2008), where she was assistant chief medical officer.

She was assigned to the women’s snowboarding team at the Winter Games in Torino and again in Vancouver, where she saw plenty of action—and injuries—in the high-risk snowboard cross event.

This time around in Sochi 2014, Lebrun will lead 10 core team physicians, complemented by more than 50 other health-care practitioners including nutritionists, exercise physiologists and mental performance consultants. The team will respond to everything from acute injuries to illness among the 217 athletes and roughly 150 support staff and mission team members in the Olympic Village.

“A lot of athletes come to the games with overuse injuries, as you'd expect, but there's also infectious diseases and so on that you don't always think about,” she said. “We tried to get everyone vaccinated against the flu so they don't get H1N1, and we did the same thing with measles.

“We also had everyone take Dukoral against travellers’ diarrhea, because that part of the world is considered a moderate risk."

As a professor in the U of A’s Department of Family Medicine, Lebrun spends much of her time researching the female varsity athlete, most recently gauging how to predict which athletes are most susceptible to concussion and which are likely to have prolonged injuries. She’s also published on the effects of reproductive hormones on sports performance.

But every four years, she puts all that aside to answer the call of the Games.

"Once you've been to the Olympics, I guess it's always a passion,” she says. “I understand what the athletes go through in terms of training and dedication to their sport. And I've seen a lot of the people I competed with become coaches or high-performance managers, so you've got an automatic bond."

Professor heads for Sochi as chief physician for Team Canada