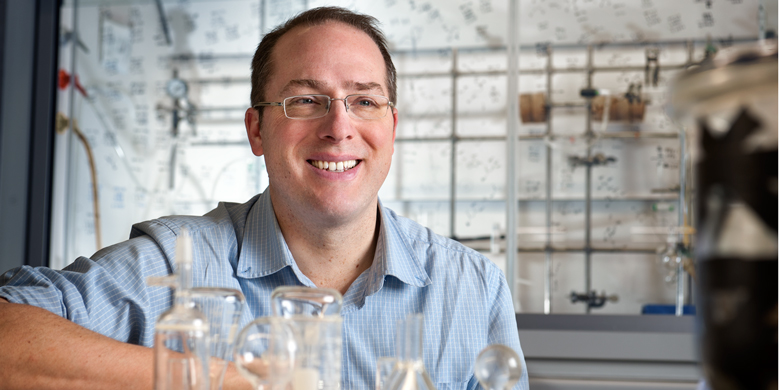 (Edmonton) A University of Alberta chemistry professor’s research paper outshone 1,300 other submissions to earn the 2013 Outstanding Author of the Year award by the prestigious Journal of Organic Chemistry published by the American Chemical Society, the largest chemical society in the world.

Dennis Hall and his U of A team won kudos for a research paper detailing a new, greener and safer way to produce amides, a class of compounds vital for the manufacture of everyday items ranging from prescription drugs to shampoo.

Hall says the team developed a catalytic process so simple that even an inexperienced undergraduate chemistry student could use it to produce amides.

“Our process is also more sustainable than existing alternatives,” said Hall. “It does not require expensive, complicated and potentially toxic reagents. It occurs at ambient temperature, and the only byproduct of our catalytic process is water.”

Hall credits the U of A’s commitment to fundamental or curiosity-based research for enabling his team to produce a simplified, safe process for producing a widely used class of chemical compounds using a new mechanism.

“Funding agencies place an increasing emphasis on applied research or focused research for a specific end use,” said Hall. “But people have to realize that fundamental or curiosity-based research can have long-term payoffs. Plastic, computers and cellphones—technologies we take for granted—are the result of fundamental scientific research. No one knew at the time where that research would lead to, and it changed the lives of everyone on this planet.”

The U of A team’s catalytic process for amides has long been on the radar of GreenCentre Canada, a federal agency tasked with helping university researchers and industry produce sustainable chemicals and environmentally friendly products. It was recently announced that GreenCentre, with the help of TEC Edmonton, has licensed the catalytic process.

“The U of A’s relationship with GreenCentre will help us with further refinement of our catalytic process and help us get it out to companies that can use it,” said Hall.

The Journal of Organic Chemistry Outstanding Author Award comes with a $3,000 prize. Hall was quick to share the accomplishment with his two co-authors, post-doctoral fellow Nicolas Gernigon and PhD student Raed Al-Zoubi.