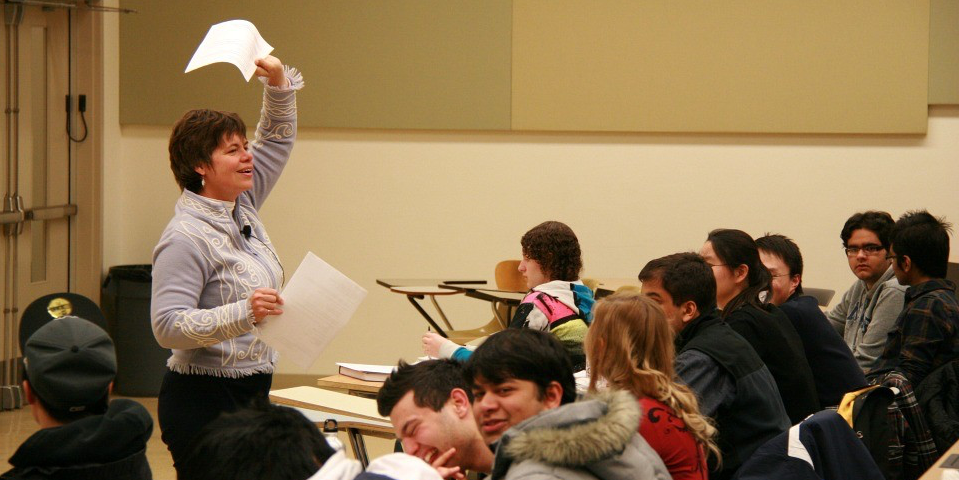 (Edmonton) University of Alberta chemical engineering professor Suzanne Kresta has won the 2014 Engineers Canada Medal for Distinction in Engineering Education, the highest award in Canada for an engineering educator.

“Some things mean a lot and this is one of those things,” said Kresta. “This is just—wow.”

The award recognizes not only Kresta’s classroom teaching, but also the professional development education she provides for practising engineers and her work with her peers to help enhance teaching effectiveness.

“I’m really honoured,” Kresta added. “When you keep doing what you believe in because it’s the right thing to do, for 20 years, and then someone recognizes that, it’s tremendously gratifying. It’s like my dad used to say: ‘You done good, kid.’

“Dad used to say that teaching was the most important thing you could do with your life.”

Kresta joined the U of A Faculty of Engineering in 1990. As well as building a reputation as an internationally respected researcher, she has focused on continually improving teaching effectiveness. Kresta has twice won the Faculty of Engineering Undergraduate Teaching Award (1993-94 and 1995-96), followed by the U of A’s A.C. Rutherford Award for Excellence in Undergraduate Teaching in 2011, and the 2013 Association of Professional Engineers and Geoscientists of Alberta Summit Award for Excellence in Education.

In January of this year, she was appointed to a six-month term as acting associate dean (research and planning) in the Faculty of Engineering.

She’s one of two U of A faculty affiliates with the U of A Centre for Teaching and Learning and is the driving force behind the Faculty of Engineering’s Faculty Forums, which offer professors guidance on teaching effectiveness and professional development.

“The thing about this award that really makes me happy is the scope of my teaching practice goes from second to fourth year—from students who are transitioning into chemical engineering, to the transition into project-based professional practice and continuing education for professionals.”

Kresta is the senior editor of the Handbook of Industrial Mixing: Science and Practice, regarded as the authoritative guide on mixing. The term “handbook,” however, is something of a misnomer: the textbook is exhaustive, at more than 1,400 pages. Kresta is now working on a second edition.

Her teaching habits include “getting into the trenches” with students, working alongside her teaching assistants in labs, and challenging students to question her and to think critically about the concepts they’re being taught. It may take a few classes, but students soon start checking Kresta’s work while she’s completing equations during lectures.

“I tell them ‘I need you to help me find my mistakes.’ I tell them it’s a part of their professional practice. It helps them when they’re thinking critically.”

She says it’s important at any level that students feel challenged, too.

“In order to get people to a new level, you have to push them outside their comfort zone or they won’t be transformed, and this is what my courses are about—getting to another level. That’s not a comfortable experience, and we do it to our students every year. A student’s final capstone project is every bit as challenging as their first year—it’s just a different set of learning objectives.”

There are many reasons Kresta offers when asked why she teaches, but one is telling in that it suggests teaching is just something she simply must do.

The impact of winning the Engineers Canada Medal, she adds, is the opportunity to do more good work.

“This is a credential you can leverage; it means you get to do the next level of stuff, to take on new challenges, to tackle new things.”

The award was presented May 24 in Saint John, N.B., but engineering dean David Lynch couldn’t help but share the news with colleagues two days earlier at an event celebrating teaching excellence in the Faculty of Engineering.

“It’s the highest award in Canada for an engineering educator,” Lynch said. “I was delighted when I was informed and I can say with considerable pride that this the third time in seven years that the recipient has been from the Faculty of Engineering at the University of Alberta.”