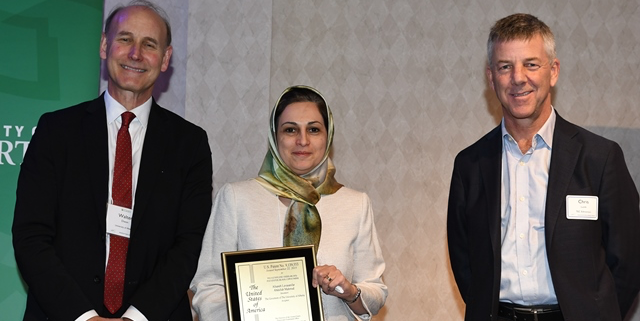 A new technology to help improve the efficiency and efficacy of cancer drug therapies received a patent award from TEC Edmonton at its Innovation Makes Sense event last night.

The nano-scale technology, a platform of excipient materials used to formulate drugs and molecules that become drugs, helps improve the odds of a drug being accepted in a patient’s body.

“Only one in 10,000 molecules that are developed in chemistry labs make it onto the pharmaceutical market,” says Afsaneh Levanasifar, professor, Faculty of Pharmacy and Pharmaceutical Sciences. “The common problems with some of developed molecules towards becoming a drug is that they are not absorbed by the body because they are not soluble or they are not stable enough, so the drug gets excreted from the body without working to its full effect.”

“This new technology solves the problem by making the drug soluble and at the same time release slower in the body which keeps it in the blood stream longer and it can even protect the drug from harmful enzymes that want to get rid of the drug therapy,” says Lavasanifar. “The technology can also help the drug target diseased tissues like cancer or inflammation, if needed.”

Lavasanifar has patented a material that can be used to prepare degradable polymers, with potential applications in the field of drug delivery and tissue engineering. Her team is pursuing commercialization of the technology developed through the patent for drug delivery applications.

Current lab trials of the technology have shown promising results in treating lung and colorectal cancer; the technology can also be used to reduce the harmful side effects of other cancer treatments.

The technology is currently licensed to the University of Alberta spinoff company, Meros Polymers, and is close to being licensed to another Canadian company for drug delivery systems.

The technology is based on material already approved by the US Federal Drug Administration reducing the time it takes to develop it into an approved drug therapy. “The process to get the technology into the market is about 15-20 years but we are now more than half way there,” she says.

Lavasanifar says she has been working on the technology since 2003 when one of her then PhD students, Abdullah Mahmud, co-invented the technology.

She credits Meros Board members Bruce Hirsche (Corporate Counsel) and Don Hughes (General Manager) and TEC Edmonton for helping her win the patent award and advancing the technology to where it is today.

She says she is hopeful the technology will make it to market one day and have a positive impact on the quality of life for patients, especially those undergoing cancer treatments.