Professors team up for Festival of Ideas primer 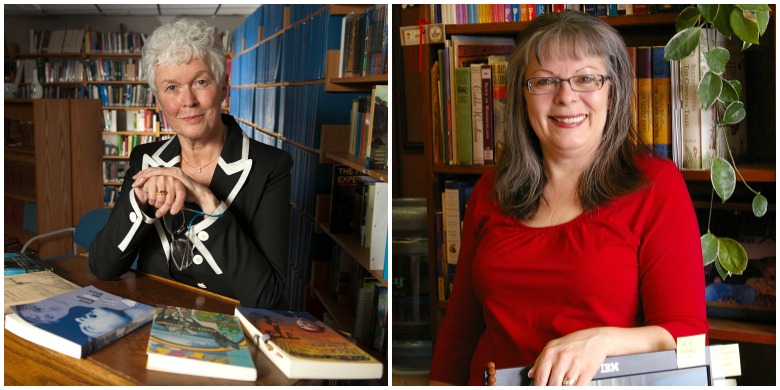 It was just past the turn of the millennium and, as far as the thesis topic was concerned, Alanis Morissette’s Jagged Little Pill album had begun settling into the classics category after closing out the latter part of the 20th century by selling the bulk of its 33 million copies and dominating the airwaves, song charts and awards shows thanks to startling, angst-riddled ballads such as You Oughta Know and All I Really Want.

The mother-daughter research team pulled together a “she said, she said” dialogue-style paper, entitled “Voices and Visions: A Mother and Daughter Discuss Coming to Feminism and Being Feminist,” that explored the generational divides that exist in defining feminism.

“[Morissette] is a good writer—the woman can write a song—and my daughter was listening to it, people were still listening to the album, so she was relevant,” remembers Harde, now a professor of American literature and culture at Augustana Campus whose more recent explorations include the deconstruction of songs written by, among others, Steve Earle and Bruce Springsteen. “The pervasive anger in that whole album made it interesting to me.”

In the paper, the pair discussed Jagged Little Pill as an indicator of third-wave feminism, which seeks to avoid perceived pitfalls of feminist ideals that trace back to the 1960s. “We talked about Morissette’s anger as not a bad role model for the apathetic generation of young women who don’t think they need feminism.”

A decade later, Harde will have a chance to reflect on her thoughts about Morissette and feminism when she and English professor and Margaret Atwood scholar Nora Stovel host a Festival of Ideas primer Nov. 8, before the global icons take the Winspear Centre stage Nov. 22.

“Bringing Atwood and Morissette here is huge, and if the public attends or the university attends the lectures that Nora and I will be giving, they are going to have a way to begin to think about what these incredibly bright and talented women are saying about Canadian culture before they get here,” said Harde, who is also associate dean of research at Augustana. “[The crowd] will enjoy more, I think, the conversation between Morissette and Atwood on the mainstage.”

Stovel, who regularly teaches Atwood’s works in her Canadian literature courses, says she wants to talk about Atwood’s range as a writer in a half-century-long career that has produced not only award-winning novels, but also great poems, children’s books, short stories, non-fiction and science fiction.

She also plans to discuss Atwood’s role as “the conscience of Canada.”

“She has done important things for Canada. One of the most interesting points is that she is very courageous and even fearless in her cultural commentary, and that includes commenting on our current government,” said Stovel, who adds that Atwood’s criticisms are made even more influential thanks to the intelligent, entertaining and trenchant manner in which she speaks. “I respect the fact that she is not afraid to speak out the federal government, especially regarding what she sees as its attack on information and knowledge.”

Stovel, who says her favourite Atwood novel is Cat’s Eye, would also like to touch on Atwood’s latest work, MaddAddam—the final novel in a dystopian trilogy, preceded by Oryx and Crake and The Year of the Flood—but wants to be sure to save time to talk about Atwood’s many awards, including one that is conspicuous by its absence.

“I want to talk about the fact that the people who award the Nobel Prize finally have recognized Canadian literature in their award to Alice Munro, and speculate about whether they will recognize Atwood in this way,” said Stovel. “It is really shocking that they haven’t awarded the prize for literature to a Canadian before this, because we have so many brilliant Canadian writers, and that has been the case for well over half a century. Certainly Margaret Atwood deserves such an award.”

The Works of Alanis Morissette and Margaret Atwood
Presented by University of Alberta professors Nora Stovel and Roxanne Harde
November 8 | 7 p.m. | Stanley A. Milner Library
Free for everyone

Professors team up for Festival of Ideas primer
Newsroom