Program will train next generation of meat industry leaders 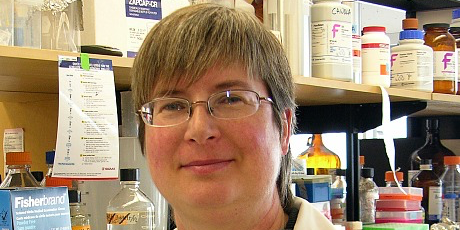 UAlberta professor and meat scientist Heather Bruce is the director of the new Canadian Meat Education and Training Network. The network is funded by a $1.6M NSERC grant.

(Edmonton) The University of Alberta will soon be home to Canada’s first meat science graduate program, thanks to a $1.6-million grant from the Natural Sciences and Engineering Research Council of Canada.

The grant will be used to fund the Canadian Meat Education and Training Network (MEaTnet), a virtual organization made up of the U of A, Université Laval, the University of Saskatchewan and the University of Guelph. The organization will be based at the U of A but will develop a shared graduate studies curriculum between all four universities. The network estimates it will produce 50 grads over the next six years and aims to have formal meat science graduate programs at all four partner universities by 2020.

Heather Bruce, associate professor in the Department of Agricultural, Food & Nutritional Science and director of MEaTnet, said that although similar programs exist south of the border, no single Canadian university has had the ability to shoulder a meat education program of this type on its own.

“The meat research community in Canada is fairly small, and we recognized that no one institution had enough resources to do it all. So we decided that we would put together a network for research purposes—but then we realized this could also work for education,” she said.

Bruce added the network will fill a looming leadership gap in Canada’s meat industry. With the average age of meat industry managers hovering above 50 years, she noted the program will meet the industry’s growing demand for new, highly trained personnel.

“Even though there are a lot of people who work in the meat industry, those people don’t necessarily have the skills set to take a management position early,” she said.

The program will deliver four main areas of teaching to students: meat microbiology, meat processing, biochemistry and muscle-food economics. As well, all graduates of the program will spend a four-month internship with one or more of the network’s four industry partners. MEaTnet will be releasing the names of the industry partners later this month.

“There’s a number of impacts the network will have. I’m hoping that it will further tie together the meat research and meat education community and I’m hoping it will strengthen ties with industry,” she said.

MEaTnet is one of nine programs funded this year through NSERC’s $14.8-million Collaborative Research and Training Experience (CREATE) program.

Program will train next generation of meat industry leaders