Promoting peace by the book

Palestinian student creates “peace library” to bring hundreds of books to kids in her hometown. 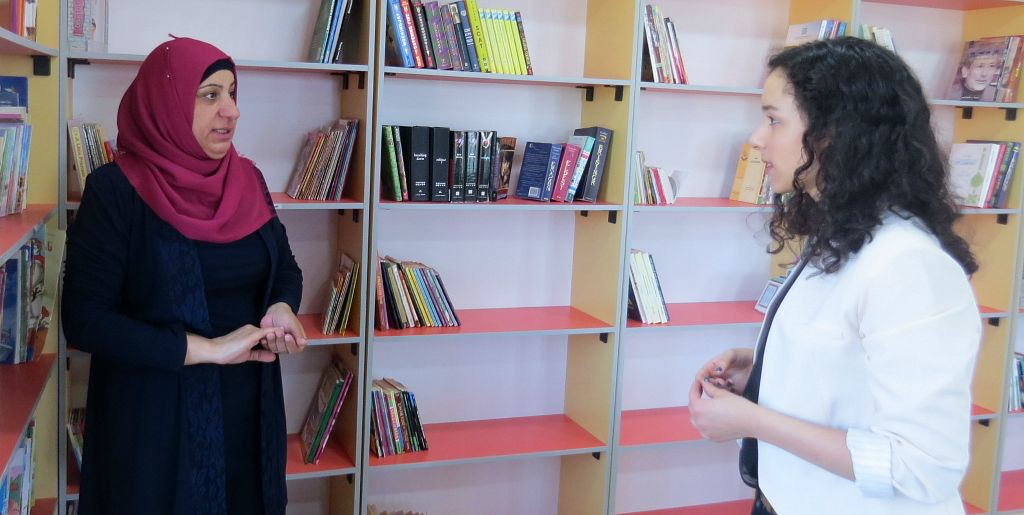 (Edmonton) Growing up in the small Palestinian village of Betein, Dalal Awwad and her sisters read Nancy Drew mystery novels, immersing themselves in an unknown world that teased their imaginations.

Today, those well-thumbed, beloved books are among hundreds sitting on the shelf of a new children’s peace library in Betein, thanks to efforts led by Awwad, a University of Alberta student. The 21-year-old resident of the U of A’s International House accessed a $10,000 grant from the Davis Projects for Peace program and worked with the village council to fill a room in their building with books for the community’s children.

Available to residents of the U of A’s I-House and others worldwide, a $1-million Davis Projects for Peace endowment was established in 2007 by lifelong internationalist, philanthropist and former New York I-House resident Kathryn Wasserman Davis, to encourage student initiative, innovation and entrepreneurship focusing on conflict prevention, resolution or reconciliation.

Awwad was inspired to apply for the funding for the widespread good it could do in her home community. The library, which opened in August, serves between 4,000 and 6,000 children up to age 18 from Betein and neighbouring villages. There, they browse the shelves for more than 1,000 fiction and non-fiction books about different countries, religions and philosophies, opening a window to new experiences and fostering “mental peace and serenity,” Awwad said.

“I believe that we should encourage children to free their minds by reading and learning about new ideas. This, in turn, may encourage them to think and act in a peaceful way.”

A resident of the U of A International House for three years, Awwad, 21, has volunteered for various global projects, but her library proposal was an opportunity to bring concrete change to an isolated rural community—a segment of society she one day hopes to serve as a physician, after completing a degree in sociology from the U of A’s Faculty of Arts.

Isolated by checkpoints that make travel difficult, Betein and its neighbouring villages have limited ability to provide extracurricular activity for children outside of regular school classes, which can make for a stressful environment, Awwad noted. “I want to give children in the village more opportunities to get involved in the broader community, while also being able to build connections with other children by reading together and participating in activities at the library.”

Awwad remembers the joy that reading brought to her as a youngster. As she graduated from reading girlish mystery novels to absorbing non-fiction, “Reading stories as a child made me realize that the world is much larger than I could ever imagine, and that I wanted to become an active participant in something broader than what happens in my own surroundings.”

After receiving approval for her project from the Davis Projects for Peace in March of this year, Awwad worked with members of the village council, who donated a room in their municipal building for the library. She consulted with librarians from the neighbouring city of Ramallah to decide what books to purchase with the grant, and a television, computer, printer and furniture were also purchased. As well, a librarian has been hired by the village council and local volunteers collected books and set up the library. U of A students also donated funds toward book purchases, as did Betein residents.

Eventually, the village council hopes to use the facility as a first step toward developing  a community learning centre that would offer library services for adults, a tutoring program, language classes and educational activities that encourage peace and intercultural communication.

Stocked with brightly illustrated books in English, Arabic, German and French, the library has become a gathering place for children, Awwad said. “They like the attention. One of the kids at the opening said he felt special because there was a room for him at the council building, too,” Awwad said.

The library project also benefited Betein generally, Awwad said. “The community became stronger and more co-operative. Many youth are currently volunteering at the library to improve their leadership and volunteer skills. On a broader scale, the project is now also being used to strengthen connections and social relations among Betein and its surrounding communities. I think building these connections is important to the mental wellness of both children and adults in these communities.”

For her part, Awwad is grateful for the encouragement she received from University of Alberta International on the project and for the personal experience of being part of I-House’s close-knit intercultural community. “Being able to learn about different people and cultures is key to making change together in the world.”

Awwad’s library project is an outstanding example of how to build peace through a sustainable, ongoing initiative, said Nancy Hannemann, director of global education for UAI. “It is a model of community development. We are proud of Dalal in terms of what she was able to accomplish.”

The library project is the latest of several Davis Projects for Peace successfully led by U of A I-House residents over the years, Hannemann noted. Other projects have been based in Guatemala, Panama, Kenya, Peru, Morocco and Uganda, with goals ranging from improving nutrition and water quality to offering English lessons and computer technology.

The opportunity to work on such projects develops students’ leadership and project management skills, and gives them a “tremendous learning experience to develop their own ideas about peace,” Hannemann said. “It’s a concrete way for them to become more familiar with what it means to become a global citizen—a goal of our efforts at the University of Alberta.”

To donate to the children’s library book fund, email awwad@ualberta.ca

Promoting peace by the book
Newsroom