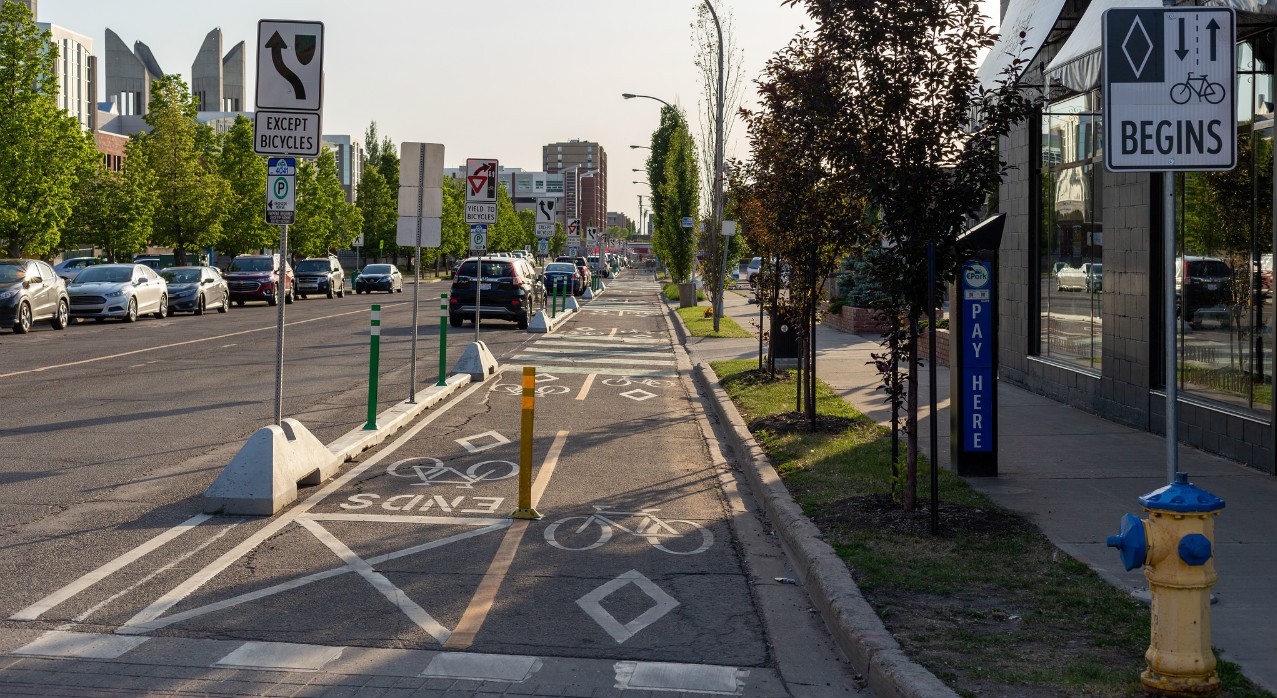 Protected bike lanes like this one on 105th Ave. near MacEwan University are making it faster and less stressful for cyclists to get around in Edmonton's core, a new study shows. (Photo: Mack Male via Flickr, CC BY-SA 2.0)

Edmonton’s contentious 7.8-kilometre stretch of protected bike lanes and shared-use paths that were built last summer have led to a sixfold increase in the number of stress-free connections made in the city, according to student-led research from the University of Alberta.

“A safe and connected network is a necessary condition for people to bike more,” said Laura Cabral, who is studying for her master’s in transportation engineering. “In this regard, the new bike lanes are a step in the right direction, given the Edmonton Transportation Master Plan calls for an increase in active modes of transportation such as biking and walking.”

To measure the impact of protected bike lanes in Edmonton, which cost $7.5 million to build, Cabral began by classifying roadways into four categories based on how stressful they are for cyclists to navigate using the Level of Traffic Stress (LTS) framework. LTS 4 is the highest stress level and includes any cycling situation regardless of traffic volume and speed limit. The target level for a relatively safe and stress-free citywide cycling network is LTS 2.

“There is always a limit to how much traffic a cyclist can deal with,” said Cabral.

Cabral then generated 220 potential origin points within a four-kilometre grid of three significant Edmonton destinations: the U of A, MacEwan University and Churchill Square.

She then performed a “bikeshed analysis”—a term she coined likening biking connectivity to a drainage basin of a watershed—to determine where you can get to from the three destinations using links that are LTS 2 or better.

Her first finding of interest was that, before the biking network was implemented, MacEwan University and Churchill Square could not be reached by any low-stress paths.

As well, Cabral noted that connectivity within her grid stops abruptly at 61/63 Avenue to the south and Yellowhead Trail to the north.

“Yellowhead Trail is a particularly high-stress link, as there aren’t really any places to get across.”

Oddly, even though they sit well within the cycling barbed-wire fence that is the Yellowhead and Anthony Henday Drive, Cabral found that the North Glenora and McQueen neighbourhoods, and even Coronation Park, are walled off from the inner-city cycling grid because of Groat Road and 107th Avenue.

In the city centre, Cabral said her analysis shows Boyle, Riverdale, McCauley and the downtown still suffer from connectivity issues as well.

Still, she concluded the number of connections made in the city has grown exponentially since the opening of the bike lanes. Of the 220 origin points, 72 LTS 2 routes existed to the three destinations before there were bike lanes. That number ballooned to 423 routes after the bike lanes were added.

“Without this minimal amount of infrastructure, people couldn’t get from where they are to where they want to go using only low-stress routes, so it is a necessary condition to get more people biking.”

And as more of Edmonton is connected with a low-stress network, Cabral said routes have been shortened.

Prior to last summer’s bike lanes project, going from, for example, an origin just south of 107 Avenue and west of Groat Road took 1.5 kilometres longer to get to the U of A than it does now.

“If we’re talking about commuting or utility biking going to a store or to see a friend, having a trip that is shorter is better,” she said.

“The main take-home message is that the protected bike lanes implemented last summer do increase the connectivity of the network.”

Cabral said her analysis is part of a bigger project with the city evaluating the effectiveness of the cycling facilities in Edmonton.

“The next question is, now that we have a better connected network, are more people biking?”

The study was a requirement for a senior-level advanced geographic information systems course that saw students systematically look into ways to make Edmonton more livable by relying on geospatial data.