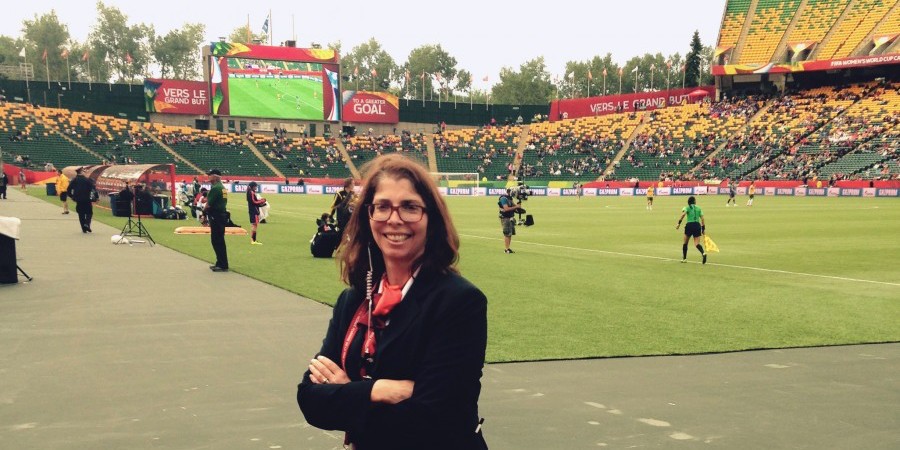 (Edmonton) On the opening night of the 2015 FIFA Women’s World Cup, Teresa De Freitas found herself in a sea of red fighting back tears. As a crowd of 53,000 team Canada supporters serenaded the home squad with their rendition of O Canada, De Freitas, along with colleagues who were volunteering their medical expertise at the event, soaked in the moment.

“I was sitting with two younger physicians and this was their first big event. And I was almost in tears because they were like, ‘I can’t believe I’m here!’” recalls De Freitas. “I was just so proud to see them so excited.”

De Freitas, or Terry to most, is the venue medical officer for Edmonton’s Women’s World Cup matches. She is also one of the newest members of the University of Alberta's Faculty of Medicine & Dentistry, after having been hired as an assistant professor in the Department of Family Medicine on June 1.

"It’s been a challenge to start a new position and organize medical services for a major event at the same time,” says Freitas. “But multitasking is part of the sports medicine environment, as well a huge part of being a physician and a mother of two kids, so I am enjoying both right now."

Throughout the FIFA Women’s World Cup, De Freitas is leading the team of health professionals providing medical services in Edmonton. The duties include being a liaison for the medical teams accompanying the participating soccer teams, providing prescriptions and X-rays as needed to athletes and team staff, arranging for emergency response services both on the field and in the VIP delegate area and arranging for anti-doping chaperones during drug tests at the event. She also helps co-ordinate emergency care in the stands on game days through the help of volunteers from St. John’s Ambulance.

According to De Freitas, her job is to be ready for anything.

“It just depends on the day. Over the years, I’ve seen all kinds of different things that you would see in any hospital emergency room happen at the event. Anything can happen.”

The duties as venue medical officer will keep De Freitas busy until July 4, when the final match is played in Edmonton. For Terry, it is just the latest in a long string of international events at which she’s volunteered her time over the past 15 years.

After graduating from the U of A’s medical program in 1995, De Freitas first volunteered her medical expertise at Edmonton’s World Taekwondo Championships in 1999. After that, she soon became hooked on sports medicine and quickly became the team physician for Taekwondo Canada, a position she held for several years, going to both the Beijing Olympics in 2008 and the 2011 Pan-Am Games in Guadalajara, Mexico. In 2013 she was chosen as the Edmonton venue medical officer for the FIFA U-20 Women’s World Cup in 2014 and the FIFA Women’s World Cup in 2015.

For De Freitas, the challenge of providing medical care at major sporting events is also what holds the appeal.

“For sports medicine physicians, it’s exciting to be able to provide medical services for athletic events. It’s a different kind of pressure. In an emergency room there’s lots of pressure, of course, but when you’re in a sports medicine event you also have to consider media, security and the magnitude of the injury in relation to the team or the athlete themselves,” says De Freitas.

“It’s a little bit of a different spin on medical care, and that’s why sports medicine physicians really enjoy it. It attracts you to that area.”

Though much of her attention at the moment is occupied by her work at the Women’s World Cup, De Freitas is just as excited about her future with the Faculty of Medicine & Dentistry.

“We’re trying to put more of a focus on sports medicine within the Department of Family Medicine and to enhance what’s already a great program. We want to make sports medicine more accessible to our residents. It’s really an exciting area of medicine to be in,” she says.

It’s clear if anyone would know about the excitement of sports medicine in Edmonton, it’s De Freitas.

“To be able to provide a really quality service, it makes you proud as a host. It makes you feel proud to be a Canadian when you do it well.”