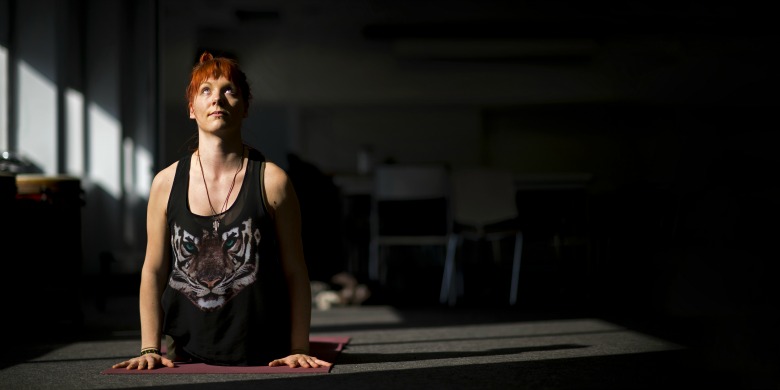 (Edmonton) Yoga can be a powerful tool to cope with stress and trauma, but finding a safe, comfortable environment can be a challenge, especially for some in the LGBT community.

Providing a safe space for all and overcoming discrimination and oppression are two hallmark features of yoga classes developed specifically for the University of Alberta community for Pride Week.

“These classes are body-positive and gender-positive spaces for anyone with any kind of body to come and practise yoga,” says Roxanne Runyon, a fourth-year women’s and gender studies student at the U of A and certified yoga instructor.

“Pride Week is really about celebrating diversity, and for some people who might not fit within a gender binary or are visibly queer in some way, going to a typical yoga studio might not be the safest thing because it’s not necessarily a safe space.”

Runyon runs a series of workshops at the U of A’s Sexual Assault Centre that explore how yoga can help individuals heal after traumatic experiences, and cope with stress, anxiety and depression.

“The body can sometimes feel like an unsafe space after dealing with depression or a traumatic event. Yoga can be a way to recover that sense of safety in the body,” she says.

Yoga as a treatment for trauma is a concept that’s gaining popularity in North America, and one Runyon used to develop two yoga classes for Pride Week.

The first, Rainbow Yoga, held on March 18, was designed to be fun and carefree while providing a safe space for all. The second, Yoga as an Anti-oppressive Practice, on March 21, gives participants the tools to address the effects of oppression on their bodies such as experienced through phobia, discrimination and transphobia, Runyon says.

Though all yoga classes by their nature have the potential to help the body recover from traumatic experiences, she says by making it the end goal and talking about how trauma manifests itself in the body, her students gain a greater awareness and understanding of body patterns.