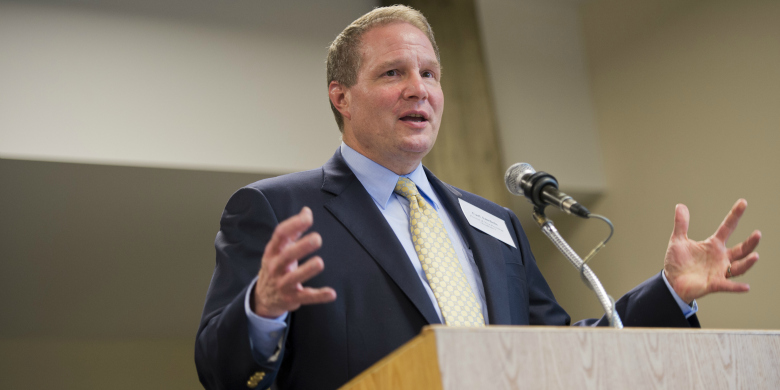 120621-carlamrhein-banner
Carl Amrhein has been reappointed as University of Alberta provost and vice-president (academic) for a third five-year term.

(Edmonton) The University of Alberta Board of Governors has reappointed Carl Amrhein as provost and vice-president (academic). His third five-year term begins July 1, 2013, following a one-year sabbatical.

"Since joining the University of Alberta as provost in 2003, Carl has provided instrumental vision and leadership in setting and achieving the academic goals and mission of the university," said President Indira Samarasekera in the official announcement. "Throughout his tenure, Carl’s energetic, creative approach to various challenges and his ability to solve problems has brought enormous benefits to the institution. We have been very fortunate to have someone of Carl’s calibre in the position of provost, and his reappointment is the result of broad and enthusiastic support across the academy."

Originally from Pittsburgh, Pa., Amrhein studied at Pennsylvania State University and State University of New York at Buffalo before joining the University of Toronto in 1986, teaching and researching economic geography of labour markets and population. He rose from the ranks of assistant professor to full professor with tenure, and subsequently became chair of the department. In 1997, Amrhein was named dean of the U of T’s Faculty of Arts and Science, a position he would hold for six years before assuming the role of provost at the U of A.

“To be offered the chance to do a third term is really very humbling and special to me,” said Amrhein. “One of the things that is so evident once you are here but is hard to see from the outside is the amazing community support the university enjoys. The senate, the board of governors, the dedication and willingness of our alumni to support the institution in all its varied activities, is really quite remarkable.”

Amrhein said a portion of the support the university enjoys locally, nationally and internationally has to be attributed to the tireless effort President Indira Samarasekera and her team have put forth in promoting the university as one that uplifts the whole people.

“In deciding to stay on for a third term, one of the determining factors is the satisfaction I get from working alongside Dr. Samarasekera and the entire vice-presidential team,” said Amrhein. "I greatly enjoy the many opportunities to work with the entire senior administration team in shaping the future of this wonderful institution."

What’s left for Amrhein to accomplish would add to an already long list of university initiatives that he has helped bring to fruition, the most notable of which include integrating Augustana Campus into the university, overseeing the creation of the School of Public Health, helping to establish the Alberta Universities Association, and developing and approving two Dare to Deliver academic plans.

However, Amrhein says he counts among his proudest accomplishments the assembly of what he considers a first-rate group of deans.

“The most important thing a provost does is select the deans, and by and large we have been quite successful in building a superb community of deans,” he said.

Amrhein’s progress in the Aboriginal-engagement arena has also been significant. Over the last nine years, Native Studies has been transformed into a full faculty that has developed partnerships all over the province, the university now has a successful Aboriginal teacher-education program and a Council on Aboriginal Initiatives, and the university has announced plans for the Gathering Place, a building that embraces and provides an inclusive and supportive learning and living environment for Aboriginal students, faculty and staff at the U of A.

In the area of student experience, Amrhein—who was recently honoured with the German Order of Merit—says the internationalization of the U of A’s academic programs would be his single greatest achievement in terms of where the university was in 2003 versus where it is now, relative to the competition. Nonetheless, he says there is still work to be done. “While we’ve been quite successful bringing students to Edmonton, I would like to have the same level of success sending our students to interesting places around the world.”

Before that work can continue, Amrhein is leaving on a one-year sabbatical that will take him to China, New Zealand, Australia and Germany to observe the internationalization of universities in those countries and to give lessons in one of the U of A’s many unsung exports, collegial governance.

“I think collegial governance is the single best model for running an academic institution. The General Faculties Council and all its subcommittees, the Dean’s Council—these are very effective organizational structures that allow the constituencies of the university—faculty, staff, students and post-doctoral fellows—to be directly involved in the decision making of the institution,” said Amrhein. “Essentially, collegial governance allows us a way to do things that would be very hard to imagine in other institutions, and do it in a way that is exceptionally enjoyable.”

Another element of the U of A that would be inconceivable at just about any other institution anywhere is the special relationship it shares with the Alberta government.

“We are among the best-supported public universities in the U.S. and Canada at this point,” said Amrhein. “That is a very important piece of who we are that is consistent in engaging Alberta in all of its different aspects.”