For Brad Necyk, giving visual form to the pain of cancer and mental illness is a way to help patients heal. 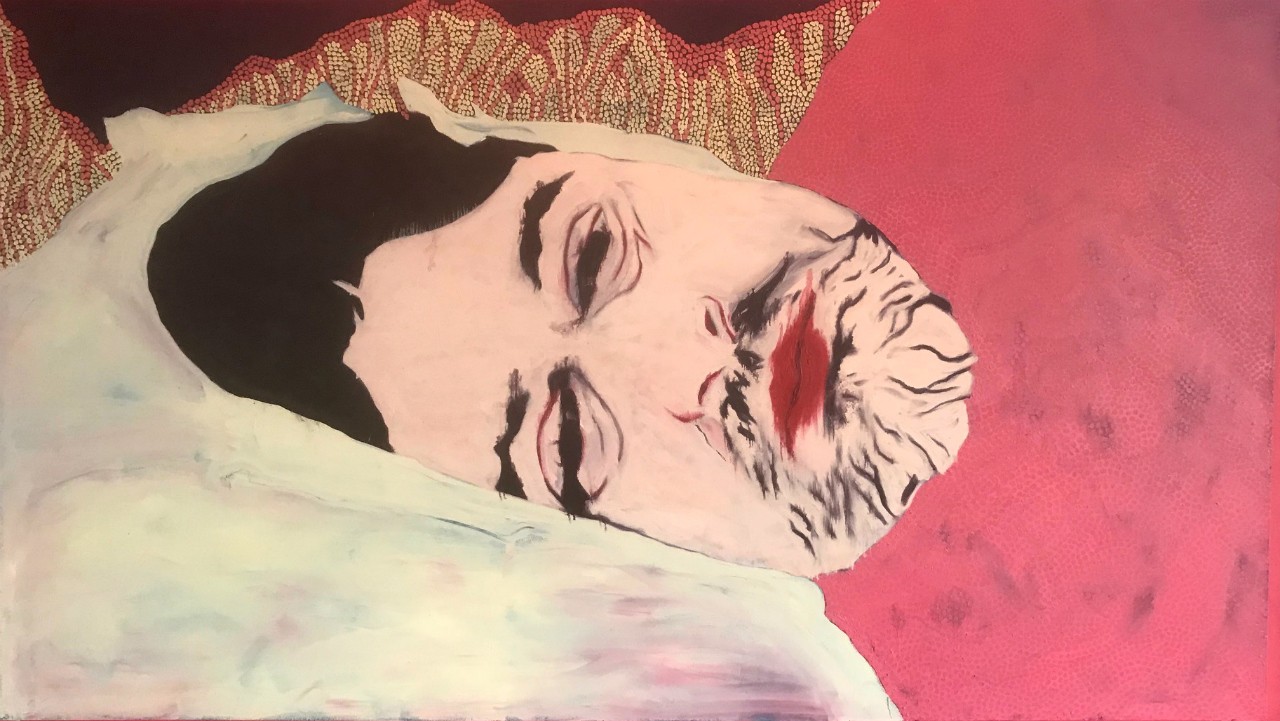 Brad Necyk's self-portrait depicts the heavy toll creating his art takes on him—an effort he says is worth it. "You go down to a place that's dark and unfamiliar, but then pull form out of it." (Image: Brad Necyk)

Brad Necyk is intimately familiar with despair. He spent a good portion of his childhood in hospital recovering from multiple surgeries on his large intestine, and was later diagnosed with bipolar disorder after bouts of depression that sapped his will to carry on.

With the right therapy and medications, he was eventually able to tame the dragon always threatening to drag him down. The struggle left him fiercely determined to better understand his own psychological pain while helping others express theirs.

So after a few false starts in philosophy and business as an undergraduate—followed by a brief career as a banker at RBC—he turned to art, pursuing an MFA with a singular mission to explore the experience of illness.

Now a PhD candidate in psychiatry at the University of Alberta, Necyk has spent time carefully observing and hearing the stories of transplant patients and head and neck cancer patients in Edmonton, Indigenous suicide survivors in the Arctic, and youth at Toronto’s Centre for Addiction and Mental Health (CAMH).

Each time he has emerged with a series of evocative images meant to capture his own and others’ subjective experience of illness with emotional honesty, giving form to an incomprehensible darkness.

The work exacts a heavy toll on Necyk. Every time he plunges into a new project, listening attentively to what patients have to say, he becomes ill himself.

After his last project with youth in a mood and anxiety unit at CAMH, he had what he calls “the worst manic episode of my life,” lasting a full month.

"Almost everyone in the unit was bipolar,” he said. “It was really intense because I had never seen from an outside view what bipolar disorder looks like.

“It's so emotional, and you're trying to make room in yourself for other people’s stories and the really difficult worlds they live in. It comes at a psychic cost."

And yet, for Necyk, the descent is well worth the pain.

"You go down to a place that's dark and unfamiliar, but then pull form out of it. It’s a terrifying but really creative time—important and really meaningful. We need more of these stories."

He said he always feels better after the creative process comes to fruition, and he’s heard back from patients who say the art gives them a new way to come to terms with what they’re going through.

In an exhibit called Telling Stories Otherwise, samples of his work are now on display at the Fine Arts Building (FAB) Gallery, including large-scale 3-D rendered spaces, videos, paintings, drawings and virtual reality spaces. The show forms the visual portion of his doctoral dissertation.

“Illness is a vital meaning-making event in people’s lives, and the stories we use to narrate our illness to others and ourselves matter deeply,” he writes in the introduction to the exhibit.

One striking video installation shows a portrait of a head-and-neck cancer patient shot against a green screen, which allowed Necyk to separate parts of the head in post-production and have them move independently.

"It's a very dismantled, disintegrated portrait, and it really resonated with patients,” said Necyk. “Each one of them found it to represent part of their illness journey and what they were feeling."

Necyk’s work has been shown in the Double Happiness Project in Toronto, and at the International Museum for Surgical Sciences in Chicago as part of a six-artist exhibit called "see me, hear me, heal me."

Necyk said his journey was possible only because the mental health establishment has in recent years become more open to including art as part of a more holistic approach to therapy.

He was the first-ever artist in residence at the U of A Hospital’s McMullen Gallery in 2014, for example, which gave him access to tissue and organ transplant patients. But he also credits the U of A’s graduate program in psychiatry for recognizing the value of art in understanding illness.

"It was an amazing fit for me, in that the program was loose enough to allow in an artist like me,” he said. ”I had no medical training, and didn't need to focus on the science of mental health. When I started, I had no idea what I was going to do."

His residency in Toronto was also the first time CAMH opened its wards to an artist, calling Necyk a “visiting artist researcher.”

This spring, Necyk hopes to defend his thesis, then continue on the unique path he’s forged largely himself.

“I’d like to keep exploring the potential of what art can do, and how properly trained artists can help in all forms of healing.”

The Telling Stories Otherwise exhibit runs until Sept. 22 at the FAB Gallery, with a reception Sept. 20 at 7 p.m.