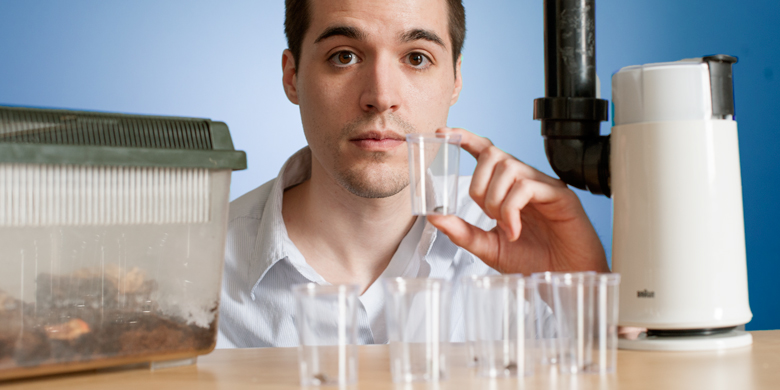 130404-david-webber-banner
David Webber used a psychological experiment involving woodlice as part of his study showing that the level of public support for a war could influence the level of mental distress soldiers feel when they arrive home. (Photo: Richard Siemens)

(Edmonton) Can events like Red Fridays, Tickets for Troops and the yellow ribbon campaign reduce the chances of Canadian soldiers experiencing combat-related stress disorders? The authors of a new study from the University of Alberta think so.

David Webber, a PhD student in the U of A’s Department of Psychology, and his supervisor Jeff Schimel recently published a paper in Personality and Social Psychology Bulletin, positing that the level of public support for a war could influence the level of mental distress combatants feel when they arrive home, potentially leading to a heightened risk for developing post-traumatic stress disorder. Webber says the results send a message that policy-makers should choose their battles wisely.

Webber and colleagues designed two studies in which participants were asked to exterminate a number of woodlice using a modified coffee grinder. In one study, they would have to prep another participant, an actor who feigned either interest or disgust at the notion of the task. In the second study, participants were asked to record in a logbook who had actively participated or who had refused to kill the bugs. In both cases, the participants indicated increased levels of guilt and distress when they felt their participation was socially invalidated.

“We did have some participants who showed some clear distress not only when going through the initial act of killing, but also after finding that somebody else had refused to do it,” said Webber. “There were some clear physical signs that people were uncomfortable after they found out it was invalidated by other people.”

Vietnam versus the war on terror

Webber’s research points to examples of wars or military actions that were perceived to be popular or unpopular with society, notably the American involvement in the Vietnam War compared with the response to the 9-11 attacks. He says that when there is no clear or rational reason for a country to go to war, the resulting protests over military involvement can act as a catalyst in the minds of returning soldiers and veterans over their role in an action their country sees as unjust or even immoral. Though the act of taking another life in combat can be in some ways rationalized as necessary for the good of one’s country, when that country’s citizens openly manifest their rejection of the war, the soldiers’ perception that their actions were out of line with social reality, and thus immoral, may become detrimental to their mental health.

“Soldiers, while they’re in the military, may believe that killing is the right thing to do. But maybe when they return home and see the culture and the country is not as supportive as they thought it once was, it makes it more distressing,” he says.

Webber says leaders need to act wisely and judiciously when deciding to go to war with other countries. Although soldiers accept the inherent risks involved with their careers, there is no training given that will help them face the backlash of public opinion against their role in the government’s choice to do battle. Even though citizens may support the soldiers, and may sign petitions and stage demonstrations with the intent of bringing them back home safely, Webber says being caught between duty and public opinion can be a painful experience.

Webber acknowledges that there is not necessarily an ideal prescription for when to go to war, but he says for the sake of the troops’ mental health, signing that declaration needs to be done with the utmost thought and care.

“When decisions are made to go to war, they should be based less on fear and insecurity and more in hard realities, such as if the country has been attacked,” said Webber. “If the decisions are undertaken with good reason, with legitimate evidence behind them, protests should be less likely and invalidation should be less of a problem.”