Pulling the veil from our eyes

Human Ecology exhibit explores the impact of eyeglasses with array of rare and unusual spectacles. 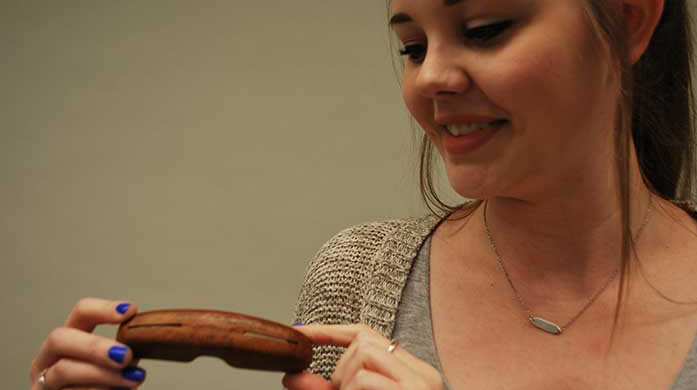 Student Danielle Peel with one of her favourite pieces in the exhibit -- a pair of Inuit-carved wooden eye-protectors from 1954.

Just as we remember a first kiss with clarity, almost everyone who uses eyeglasses remembers how dramatically the world shifted when they donned their first pair.

“Oh my God, suddenly there is stuff on the street signs you can see,” said Anne Bissonnette, a professor of material culture and curatorship in the Department of Human Ecology.

“It changes a person. We’re disabled without them and we don’t even know it.”

That surprising revelation, and many other things eyeglasses say about our culture, are put under the magnifying glass in Eyewear: Fashion With Vision, a new exhibit created by fourth-year students in Bissonnette’s course, 19th, 20th and 21st Century Dress in the Western World.

The exhibit shines a spotlight on an intensely personal object that many of us wear consistently in everyday life, but which has been overlooked in historical presentations of dress or culture. Rarely do we see people posing with their glasses in formal portraits, said Bissonnette.

Many of the exhibit’s eyeglasses are from the department’s renowned Clothing and Textiles Collection, which is unique among the country’s garment collections because it was specifically established in 1972 to highlight everyday wear.

The exhibition is divided into three themes, with the students presenting information that amplifies how fashion, science and design, and health influenced the evolution of eyewear. To illustrate the data accurately, about half the eyewear is displayed on mannequins wearing clothes from corresponding years, drawn from the Clothing and Textiles Collection.

The students’ research explored how the (generally one) pair of glasses we wear has profound importance in our lives. Yet most of us take for granted the astonishing power that eyewear grants humans, said student Katelin Karbonik.

“It’s rare that there’s such a neat and easy solution to a disability,” she said.

As for eyeglasses’ broader cultural significance, “I can’t think of any single object that’s impacted the world of learning more,” said Bissonnette.

Although historians don’t completely agree on their origin, spectacles were likely created in the 13th century and first embraced by Italian monks transcribing historic manuscripts in poor light.

“They were some of the first users of eyewear and it created the opportunity for people to become more literate," said Jeri-Ann Willis, owner of The Observatory, a long-time independent optical store in Edmonton.

“As it became more popular and mainstream, less for the elites, people had the opportunity to be educated,” she said.

An avid collector of historic eyewear, Willis has loaned many unusual pieces to the exhibit, including British lorgnettes and vintage Chinese spectacles, both circa the late 1800s, as well as a pair from the First World War that were designed to be worn under gas masks.

Bijan Asdaghi, co-owner of the campus eyewear stores Bijan Optical, contributed two contemporary pieces, including a pair of Ray-Ban Wayfarers, the iconic brand that prompted the masses to start buying high-end fashion accessories favoured by the rich and famous.

Other storied pieces include a pair of 1830s “railway” spectacles that match a portrait from the Cleveland Art Museum that is reproduced in the exhibit. The portrait depicts a fashionable gentleman wearing such frames, which were notable for their side-glass. This type of eyeglass was worn in the open carriages of early rail travel to protect the eyes from such hazards as dust, soot, sparks, wind and light. It’s still a mystery why many portraits of the era depict people wearing similar glasses in indoor settings.

Additional highlights the students unearthed from the Clothing and Textiles Collection for the exhibit include a pair of wooden, Inuit-carved eye-protectors from 1954, and patented 1965 Courrèges-designed glasses that conjure alien eyes. When designers want to be edgy, said Bissonnette, they often do so first with accessories; this pair illustrates that impulse perfectly, she said.

The exhibit opens with a 5:30 p.m. reception on Wednesday, Nov. 23, 2016, and runs through Feb. 5, 2017, in the main-floor gallery of the Human Ecology Building (116th Street and 89th Avenue). Hours are Monday to Friday 8:30 a.m. to 6 p.m. For more information: http://hecol.museums.ualberta.ca/ClothingAndTextiles/Exhibitions.aspx.

Pulling the veil from our eyes
Newsroom