Putting homelessness on the map

What if you could make a map that would help support the people most affected by poverty? 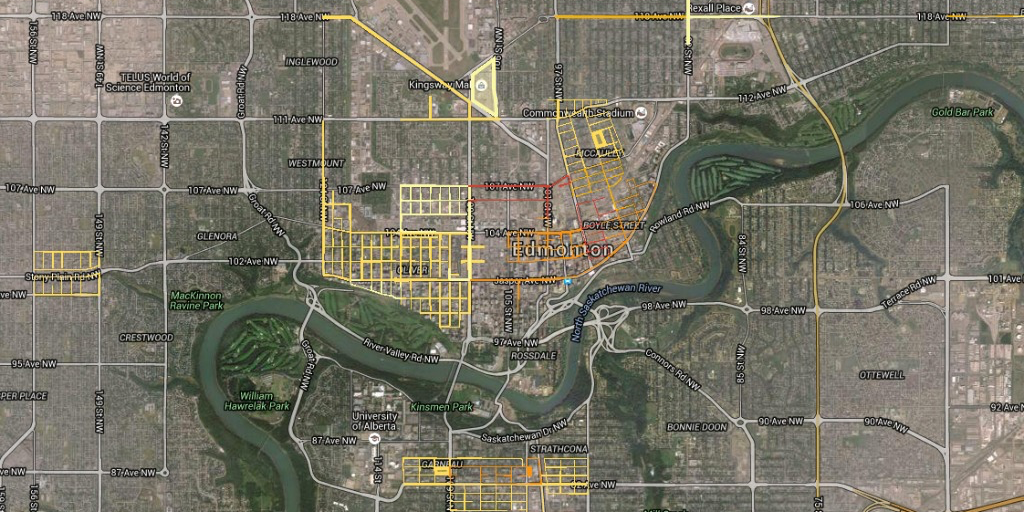 Every two years, Homeward Trust does a count of Edmonton’s homeless population. Some 300 volunteers set out along predetermined routes through the city’s streets and shelters on one day to create a snapshot of homelessness, using a set of survey questions to learn more about the lives of participants, including their age, ethnicity, housing history, sources of income and other details. This count is supported in part by United Way, and the data it produces are valuable to agencies and governments, allowing them to make better decisions about how to support Edmonton’s citizens who are the most affected by poverty.

However, the data are sometimes complicated to interpret, especially if the people using it want to look at the connections between different demographic details. Where in the city should we locate services for homeless youth? How do women experience homelessness differently from men? How many families with children are couch-surfing or staying in shelters compared with the number who are “sleeping rough”?

That’s where Maureen Engel, director of the University of Alberta’s Humanities Computing program, hopes to help. Engel is a co-investigator with the Edmonton Pipelines research cell, a group that uses digital frameworks to make meaning out of data about the local urban environment, a process she describes as “deep mapping.”

She was attending a City of Edmonton open data event when she was approached about whether she would be interested doing some mapping work with Homeward Trust using the data from the homeless count.

A dynamic graph of data on Edmonton's homeless population allows users to generate the information most relevant to them and the people they serve.

As she looked at the data, Engel realized that maps were one component to telling the story. But there was a lot more she could do with the data that the organization hadn’t yet been able to do using the traditional pie charts, bar graphs and other visualizations designed for printed reports.

“People are increasingly skilled at looking at visualizations of data,” Engel notes. “We get infographics all the time. It’s a really important method of communication.”

She could see the potential for a much more dynamic way of understanding the information. “One of the biggest things for me in being able to do this is being able to make something that people can say, ‘I’m curious about this’ and get an answer, rather than going through what other people have already determined are the interesting parts.”

That insight has now grown into a project in partnership with Homeward Trust to develop a publicly available site that will make it easy for people to understand the relationships within the homeless count data. The resulting visualizations will bring value to the work that Homeward Trust does, but more important, once the site becomes public, they will provide other organizations and community members with the ability to understand and use the information gathered in the annual count.

“Depending on people’s purpose, they can ask pretty specific questions about what they might need to know, which isn’t necessarily what Homeward Trust might need to know,” Engel explains. “If you get down to a particular agency that serves a very specific demographic, they could go into the visualizations and ask, ‘Where is this demographic of people in the city?’ or, ‘Where are people concentrated in these ways?’”

In the case of an organization like Homeward Trust, the data might be framed to reflect the big picture, whereas the value of the project for other agencies is the connections the visualizations can help bring to the surface. But Engel says anyone can benefit from the tools she is creating.

“As a tool for the general public, I think it’s a really useful thing to be able to understand and think through what actual populations of people are, who they are, what’s actually going on in the city that we share.”

‘Over there’ is where we all live 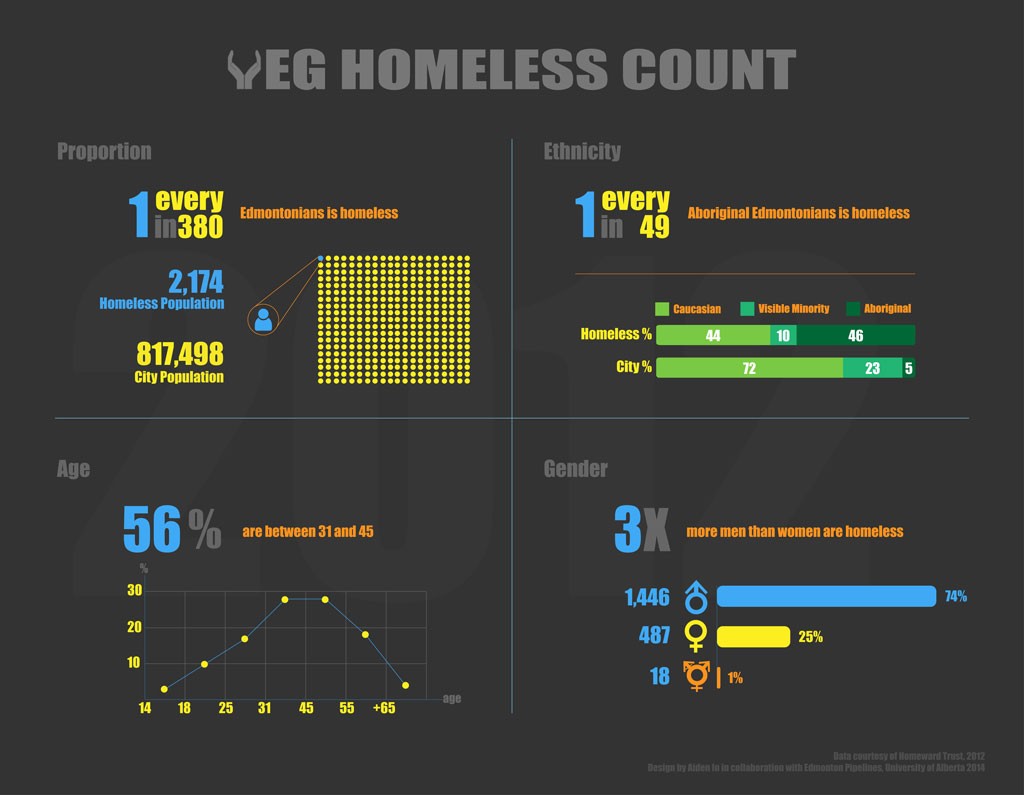 This infographic shows homelessness statistics based on the 2012 count by Homeward Trust.

One area that often surprises people is the proximity between the university community and one of the higher-density areas for Edmonton’s homeless population. Just a few blocks from campus, Engel’s map shows a high rate of homelessness in Garneau and Strathcona. One thing both communities have in common? Their youth.

“There’s definitely a younger demographic on the south side than the north side,” Engel says. That population wasn’t always reflected in earlier counts, but a few years ago, it was added to the volunteers’ routes. “It’s interesting that they recognize that this is an area now that has a population that needs to be counted. But at the same time, that doesn’t mean that population hasn’t always been there; it’s just that they haven’t always been counted.”

Not all areas of the city are counted—the count represents a one-day snapshot in areas identified as having higher rates of homelessness rather than the comprehensive coverage of a census—but as Engel explains, it does allow people to see homelessness differently.

“It matters for people to know and understand the city that they live in, and I think that there are a lot of things about these particular data that the general population doesn’t have as thorough an understanding of as they might have. My hope is that people begin to understand the real population of people that they see on the street, that it isn’t just something ‘over there’ in Boyle Street that isn’t connected to them at all, that it gives people some kind of sense of connection, that this is a city we all share. That’s a population that is a part of who we are. It matters to understand that.”

As she looks toward the future of the project, Engel hopes to be able to combine the data over multiple years so users will be able to track trends over the 11 counts that have taken place since 1995, when the first count took place in downtown Edmonton. She also hopes to learn more important lessons about how researchers should do this kind of work, including what people who do these visualizations need to understand before they begin.

“It’s a coming together of two worlds, and they each have something to offer the other. I want both of those lessons to come through—not just what data visualization can do for how we understand this particular population, but also how this population can teach us how to do better visualizations: more responsive, more ethical and more socially engaged work.”

Putting homelessness on the map