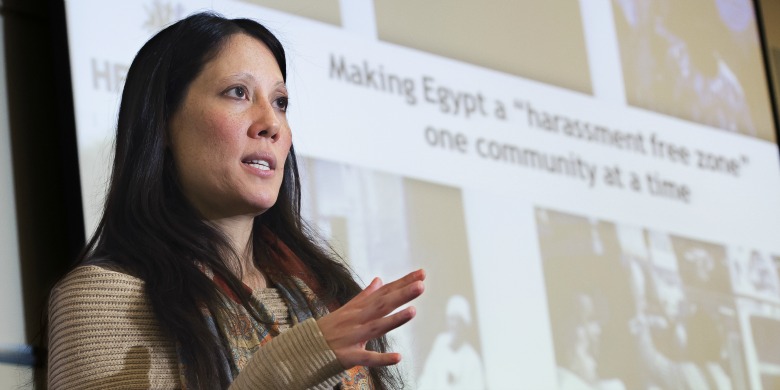 (Edmonton) Since moving to Cairo 10 years ago, Rebecca Chiao has experienced sexual harassment every day of her life. For women in Egypt, says the American native, it’s just a way of life, and one that’s becoming more accepted all the time.

“Every woman I know deals with it, every day, from the minute you leave your house to the minute you come back,” she says. “You hear comments, you get followed, groped sometimes, and sometimes people indecently expose themselves … all the way to sexual assaults.

“Sometimes you decide to just not deal with it; you stay home and don’t go to work.”

The most disturbing phenomenon to strike the country lately is the mob attack, in which a large group of men surround a woman at a political demonstration and assault her.

It’s a puzzling trend, says Chiao, since widespread sexual harassment has only recently emerged in the country, getting worse during the last decade. Its prevalence has nothing to do with tradition or historical Egyptian values, she says.

In 2010, Chiao and her friends refused to stand by and witness the harassment any longer. They started a crowdsourcing website called Harassmap.org that tracks incidents of sexual harassment throughout the country, based on eyewitness or victim accounts, and plots the results on a map of Egypt.

One recent posting from Tahrir Square reads, “They were touching and groping me everywhere and there were so many hands under my shirt and inside my pants….” In another, a woman describes a taxi driver “who pulled up in front of me, parked the car, got out and unzipped his pants and started touching himself.”

The site is quickly gaining momentum, and the data has proven effective in fighting numerous misconceptions and stereotypes.

On Jan. 30, Chiao explained her initiative at an International Week session examining the role of social media in the 21st century. It was just one of 50 sessions held on the U of A campus this week—some by presenters from around the world—to promote a better understanding of global issues.

HarassMap began as a modest project that Chaio and her friends ran from home on a laptop. “We felt it was an important way to allow people to speak up and break the silence,” she says. Last year, however, HarassMap caught the attention of Canada’s International Development Research Centre, a federal agency that supports research initiatives abroad. It agreed to fund Chiao’s project so she could work on it full time and hire staff.

HarassMap has since collected some 1,000 reports, which she admits “isn’t that much when you consider the scale of the problem.” But she says there has been a sharp rise in reporting since the Arab Spring, and the media has also taken an enthusiastic interest in the site. “We now get about 10 calls a week from reporters,” she says.

When people using her service register a harassment sighting, they are sent an auto-response containing the names of agencies and resources that can provide aid and support. But beyond the online dimension, Chiao has also begun taking it to the streets, recruiting community volunteers to query people on their attitudes and experiences with harassment in hopes of confronting damaging stereotypes.

Many in Egypt, for example, believe that harassment doesn’t happen in their neighbourhood, that its incidence is exaggerated, or that women largely bring it on themselves, says Chiao. HarassMap is now proving these notions wrong, and its staff of community volunteers is quickly growing beyond Cairo.

“We’re hoping this will become a more easily used tool for ordinary people who want to make a change in their own societies, without working for the government or an NGO, or without a lot of money.”