Rain would be mixed blessing for Fort McMurray

Downpour would be good news for air quality but could reduce water quality, say researchers. 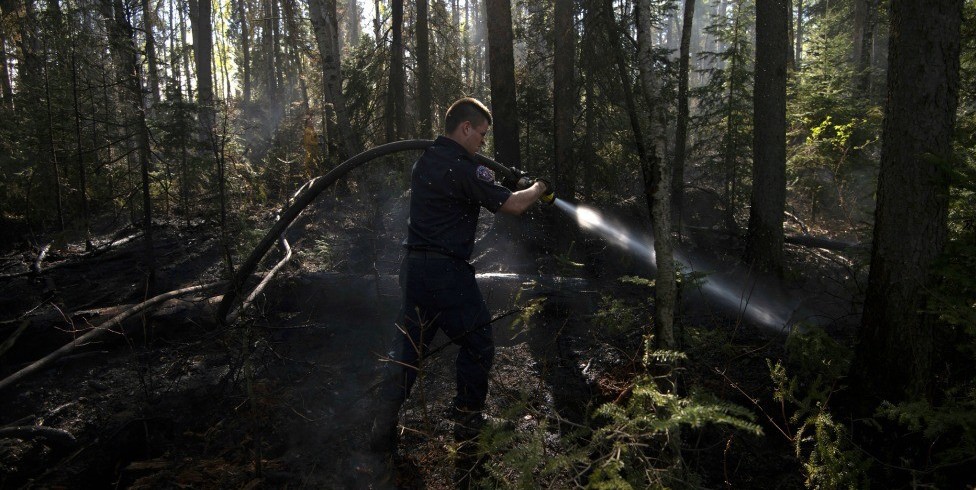 A Fort McMurray firefighter hoses down hotspots in the woods within the city limits. Rain will be a boon to the crews battling the fire but may pose challenges for water quality, say researchers. (Photo: Premier of Alberta, Flickr, CC BY-ND 2.0)

As the Alberta government considers re-entry into Fort McMurray, what health hazards, if any, will residents face when they are finally allowed back into their partially scorched city?

Will their air and water be safe? The answer according to University of Alberta scientists is yes—with help from the experts and from Mother Nature.

“Can Fort McMurray deal with it? Maybe,” says Uldis Silins, professor of forest hydrology and watershed management in the U of A’s Faculty of Agricultural, Life and Environmental Sciences, and Monica Emelko, professor of civil and environmental engineering at the University of Waterloo. The pair are among several water scientists working with the Alberta government on a recovery plan for Fort McMurray and are co-principal investigators for the Southern Rockies Watershed Project.

In terms of ensuring the water supply is safe after fire, Fort McMurray’s treatment plant is pivotal, they note. “They have the same treatment technology that the City of Calgary has, and that technology served them well in the floods of 2013,” said Silins. But both Silins and Emelko also note that although the technology is believed to be the best to respond to wildfire effects, their research suggests wildfire may threaten drinking water treatment differently and more severely than floods.

The Horse River wildfire, as the Fort McMurray fire is known, has left behind thousands of hectares of burned forest material that can make its way into the water supply of Fort McMurray, said Silins. Spring rains that usually fall in late May, June and July can wash post-fire contaminants into the Athabasca River, which feeds Fort McMurray, Silins notes. The resulting brew will have to be treated with the right balance of chemicals.

“A key objective of water treatment is dealing with harmful pathogens,” Emelko says. “The carbon and sediment left in the water after a wildfire can interfere with disinfection processes and can also limit how much water can be produced.”

Notley: Gas has been returned to about 50% of the city. Water treatment plant is working, but boil water remains in effect. #ymmfire

Keeping a close eye on rainfall will be important in the weeks to come, to ensure that when it does finally arrive, it won’t compromise water safety, said Silins.

Though water experts need to be watchful of rainfall, it would be welcome for scrubbing Fort McMurray’s air clean of smoke and airborne contaminants generated by the fire, said Sarah Styler, assistant professor of environmental chemistry in the U of A’s Faculty of Science.

As of May 16, after a week of cleaner air, the Air Quality Health Index, a measurement set out by Environment and Climate Change Canada, shows that Fort McMurray is currently sitting at maximum levels as wildfire smoke again makes itself felt in the community. Carbon monoxide, nitrogen oxides and PM2.5 (particulate matter 2.5 microns or smaller in diameter) now floating in the air can cause respiratory and other health effects when inhaled.

“Since PM2.5 is too small to quickly settle out of the atmosphere, it’s primarily removed by rain,” Styler said. But even without rain, the air-quality effects of wildfires dissipate after the fire stops burning, she added. “The smoke is ultimately transported and diluted in the atmosphere.”

That dissipation can be felt by neighbouring communities, as it was in Edmonton last week, when the smell of smoke was dominant in the air.

That was not surprising, Styler said.

“Since PM2.5 has a long lifetime in the atmosphere—up to several weeks—it can be transported long distances, so wildfires can lead to reduced air quality over a broad region,” she said.

That said, air quality eventually settles down as long as there is no more smoke or fire, she added.

“As the gases dilute and the particles get rained out of the atmosphere, then the air quality is going to go back to its baseline levels. Eventually it goes back to the way it was.”

But, she warns, studies have shown that wildfire activity is strongly connected to climate conditions, so climate change may lead to wildfires playing an increasing role in influencing regional air quality, and to more incidents of reduced air quality.

Rain would be mixed blessing for Fort McMurray
Newsroom