UAlberta researchers hot on the trail of Velociraptor relative. 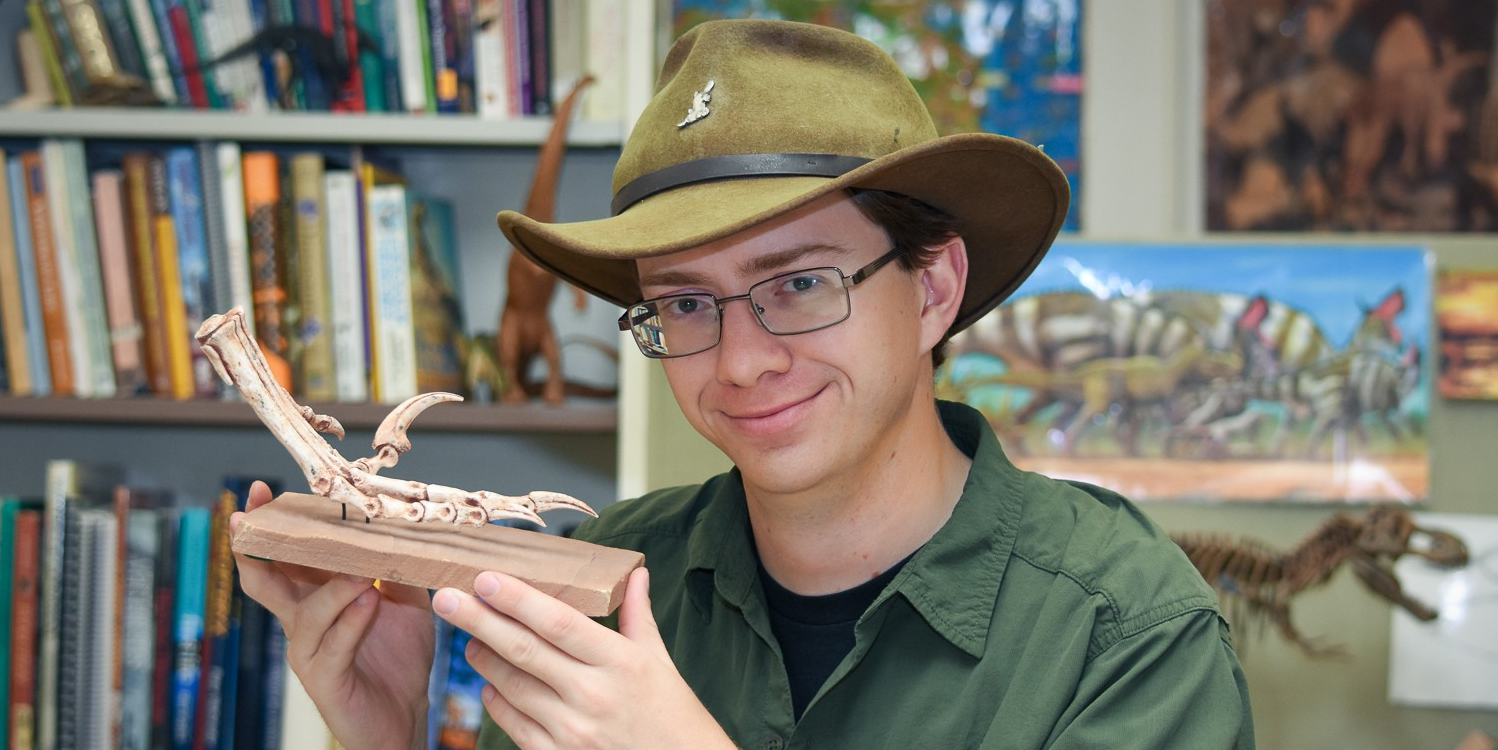 UAlberta paleontologist Scott Persons holds a model of a raptor foot with the enlarged big-toe claw raised. Persons was part of a new study showing that the dinosaurs may have occasionally used the hunting claw to gain traction on soft ground like muddy lakeshores.

(Edmonton) In this summer’s record-smashing blockbuster Jurassic World, actor Chris Pratt joins forces with a pack of highly intelligent velociraptors. And according to a University of Alberta paleontologist, the swift and lethal dinos were well cast.

“Velociraptor belongs to a group of predatory dinosaurs called the deinonychosaurs, or simply the ‘raptors,’” says University of Alberta paleontologist Scott Persons. “Raptors are characterized by particularly nasty feet. Their big toes each bore an enlarged and wickedly hooked talon, which makes raptors well suited for Hollywood fight scenes.”

Persons and U of A alumnus Lida Xing are part of the research team that has just documented a rich fossil footprint site in central China, which contains the tracks of several kinds of dinosaurs, including raptors. From these tracks, the team has gained new insights into raptor locomotion. The raptor track research was published this month in the scientific journal PaleoWorld.

“The enlarged raptorial claw was a killing tool. To keep it sharp, raptors normally held it in a raised position,” Persons explains. “Otherwise, it would have become dulled as it dug into the ground when the dinosaur walked. Modern cats retract their claws while walking or running for the same purpose.”

This unique foot posture makes the tracks of raptors easy to identify. “Most other carnivorous dinosaur tracks show three forward-pointing toes, like a bird. But a raptor footprint usually only records two complete toes and sometimes just the base of a third—although we have discovered that there are exceptions,” Persons notes, referring to one of the study’s new findings.

In a small percentage of the raptor tracks, an impression of the usually raised big-toe claw was found. The claw’s thin edge left a long and narrow gouge that does not have the splay of a typical toe print. “It’s unclear why the raptors occasionally lowered their killing claws into the ground,” Persons says. “One hypothesis is that, because the tracks were left in the soft mud of a lakeshore, the raptors might have needed a little extra traction. So, although the hooked claw was primarily a weapon, it could also be deployed like a big cleat.”