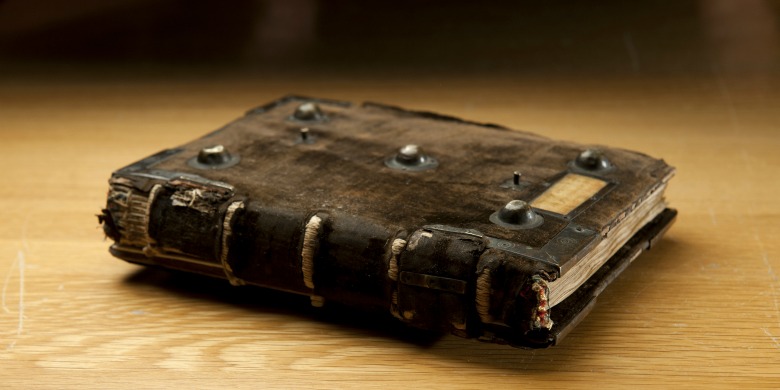 121031-witchbook-banner
The witch-hunter's guide: "Invectives Against the Sect of Waldensians," written in 1460 and discovered in UAlberta's Bruce Peel Special Collections Library, is one of only four copies of the manuscript in the world. (Photo: Richard Siemens)

(Edmonton) The idea of witches buzzing about on brooms may be a Halloween staple today, but a rare medieval manuscript recently discovered by University of Alberta researchers is a reminder that it has a dark and disturbing past.

The manuscript—Invectives Against the Sect of Waldensians—is one of only four copies in the world. It details how to find, hunt, punish or even execute witches in Europe, says history professor Andrew Gow, who was mining the U of A's Bruce Peel Special Collections Library for old books when he found it.

Gow says the mysterious manuscript, written in 1460, was prepared for an eccentric reader. “It was written in the environment of the court of the Dukes of Burgundy, one of the greatest and most powerful, interesting and strangest courts in the Middle Ages.”

Just how it ended up at the U of A libraries—and why is it missing a valuable portion—are among the questions Gow has been trying to answer. He recently brought the renowned codicologist Erik Kwakkel from Leiden University in the Netherlands to the U of A to work with students who were also trying to discover details on old books that were bound with medieval manuscripts.

“It’s missing something; someone at some point ripped out the most valuable, the most interesting and the most exciting piece of the whole manuscript, which is the frontispiece,” said Gow.

Gow says the piece would probably have depicted witches “flying to some kind of a meeting at night, where they pay homage to the devil, and they dance, feast, drink and have sex. And they fly home in the morning on their brooms.

“This is one of the very first times that this idea is translated into an image.”

The bound volume of animal hide, which may have belonged to King Edward IV of England and which no one in the world knew was in the U of A libraries until now, is probably the most valuable of the four known manuscripts, says Gow.

“Ours is the source of one of those other manuscripts and is probably the oldest. And it would have been one of the most valuable. It’s luxuriously bound, illustrated and carefully written. It’s probably the most important of the four manuscripts.” The others are at the Royal Library in Brussels, La Bibliothèque nationale de France and Oxford University.

The manuscript was written around the time of one of the first mass witch-hunting trials in Europe. The original meaning of the phrase “witch-hunt,” which we use casually today, was occasioned by one of the largest mass murders in European history.

“We’re not talking about little village things where one person is condemned because of hexing someone’s cow—we’re talking about an entire city in panic,” Gow said. “The best description that covers it all is a kind of collective moral panic. The kind of moral panic we might compare it with in our own times, to get an idea of how such things might work, would be the McCarthy communist witch-hunts. He was hunting for communists. But it actually works the same way; it was a kind of moral panic, and people were suspected and accused of communism.”