Rare moss clinging to life on B.C. cliff should be protected, says U of A expert

Single square metre of limestone on island of Haida Gwaii is only known habitat in North America for slender yoke-moss. 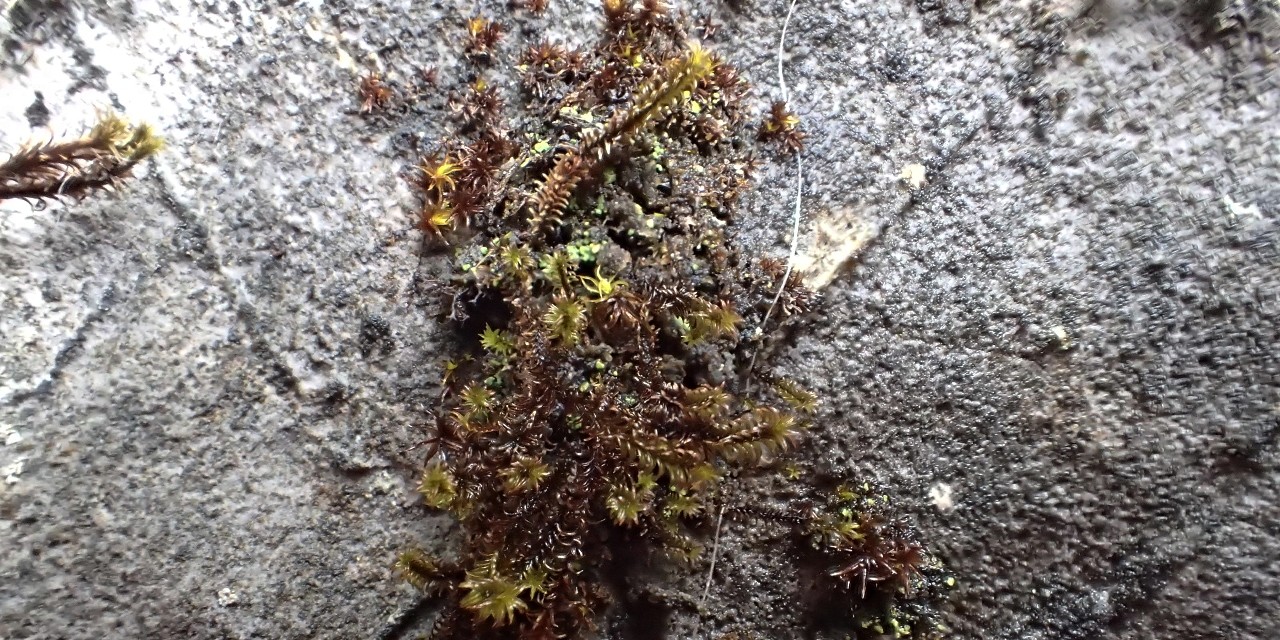 The rare slender yoke-moss, which lives on a square metre of limestone cliff on the island of Haida Gwaii, is facing threats from a changing climate and competing algae and lichens, says a U of A plant scientist. (Photo: Wynne Miles)

A rare moss struggling to survive on a single square metre of rock in British Columbia should be protected as an endangered species, says a University of Alberta expert who has studied the tiny plant.

The slender yoke-moss, found on a limestone cliff on the island of Haida Gwaii, will soon be gone without federal protection, said plant scientist René Belland, who recently reviewed the moss’s health with the Committee on the Status of Endangered Wildlife in Canada (COSEWIC), an advisory panel to Environment and Climate Change Canada.

“The situation is dire for the plant’s future and it could be gone in this generation,” said Belland, who noted it was completely healthy when first discovered in the 1960s. But the tiny patch—the only known place in North America where the moss is found—has become shaded by trees since then, spurring overgrowth of algae and lichen.

COSEWIC is recommending the moss be listed by the federal government as endangered under the Species at Risk Act, so that a recovery plan—which could include cutting some of the trees—can be developed and implemented by the federal and B.C. governments.

“It deserves to be protected because it is so unique,” said Belland, who studies mosses.

Slender yoke-moss is also considered globally rare, found only in small amounts in parts of Europe.

Canada’s tiny green patch is also at risk because of a seeming lack of ability to reproduce; the plant doesn’t have any reliable means of spreading, Belland said.

“Throughout its world range, it’s only been found with spores once, in England, and it’s unclear if the plant has ever reproduced in Canada.

“But the fact that it has survived for the last 50 years, and on just a square metre of cliff, is fascinating.”

The single colony has little genetic diversity, which also makes it vulnerable to climate change, he added.

“This moss requires cool, humid temperatures everywhere it’s found in the world, so it can’t survive any type of drought.”

The slender yoke variety doesn’t have commercial value like sphagnum peat mosses, and because it’s not been well studied, it’s unclear how it specifically benefits or interacts with its environment.

But there’s no doubt that it does, Belland said.

“Like all species, the slender yoke-moss is certainly important where it’s growing, and no doubt interacts with other species by providing homes for insects or invertebrates, for instance.”

The plant likely provides the same type of environmental benefits as other mosses, which help prevent soil erosion on forest floors, act as natural water filters, capture and preserve rain and snowfall, release nutrients into the soil and help capture and convert carbon into oxygen.

Declaring the moss as endangered draws attention to the value of the many “overlooked or tiny species that don’t have feathers, fur or scales,” said Belland, who has helped assess more than 20 other Canadian mosses for COSEWIC, including two in Alberta.

“Canadian biodiversity is about more than charismatic species like caribou, whales and other popular large animals. They account for less than 90 per cent of species at risk in Canada. The rest are species that people have never heard of.

“This plant and others like it make Canada a more diverse, interesting place.”

Rare moss clinging to life on B.C. cliff should be protected, says U of A expert