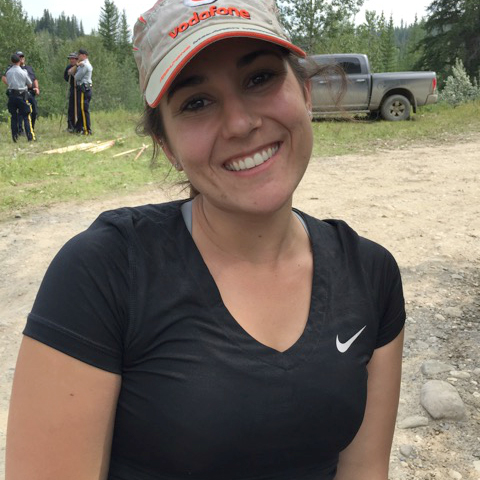 Hanna Friedlander’s excellence in the lab and hands-on experience during her studies at the U of A helped her earn her new job with the Michigan State Police Special Investigations Missing Persons Unit. (Photo: Supplied)

In her new job as a human remains analyst with the Michigan State Police, Hanna Friedlander found a match for her desire to help people in an unconventional way. 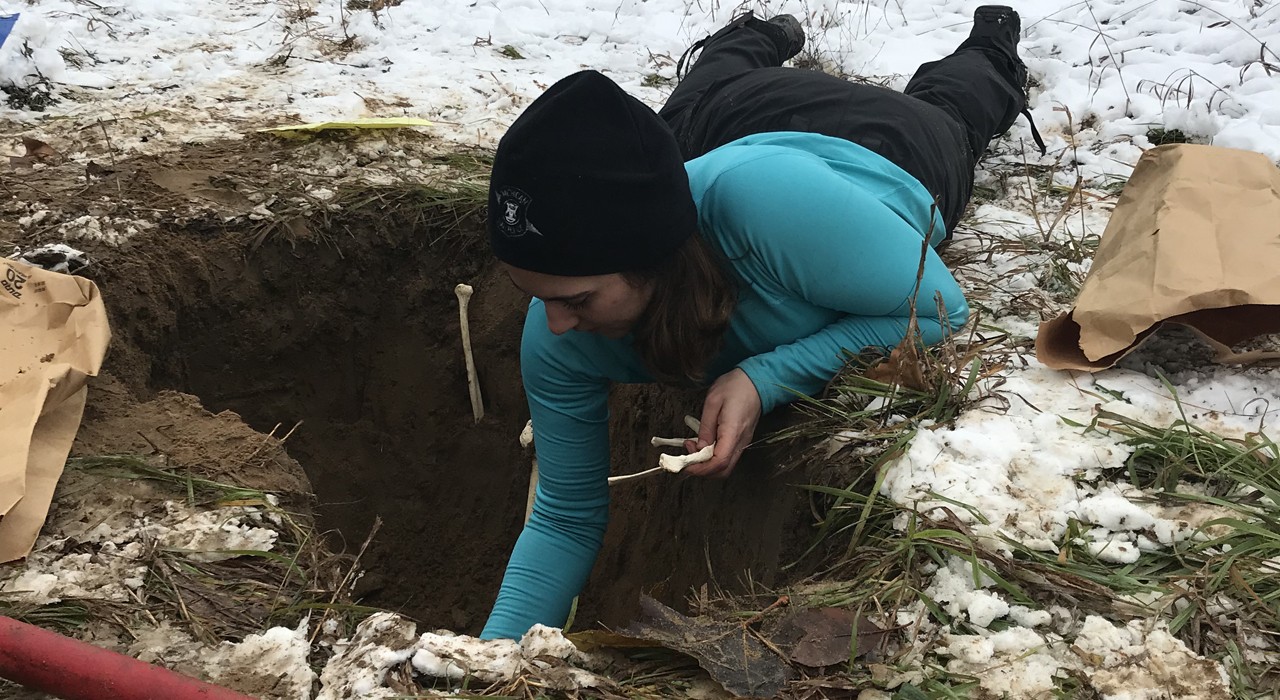 Hanna Friedlander prepares a shallow grave with plastic bones for a training scenario for crime scene investigators. Before her career in the missing persons unit of the Michigan State Police, Friedlander learned the field of forensics as a master’s student at the U of A. (Photo: Supplied)

Hollywood’s long-standing fascination with and romantic portrayal of forensic crime scene investigators—while compelling television—glosses over the sobering reality of the job in which, more often than not, “you’re dealing with the road rage of society.”

“You have to have passion to last in this line of work,” said Pamela Mayne Correia, a University of Alberta anthropologist and consulting forensic anthropologist for the Alberta Medical Examiner’s Office. “You can’t be doing this just for the money because you are exposed to incredibly difficult situations. You have to have a constitution that allows you to brush off what you’re seeing to get on with life.

The Hanna that Mayne Correia talks about is Pittsburgh, Pa. native Hanna Friedlander, whose unlikely journey to the U of A as a third-year undergraduate student led to a master of arts in anthropology with a focus in forensics and a job as a human remains analyst in the Special Investigation Division, Missing Persons Unit of the Michigan State Police.

Her adventure started in the midst of an arts degree from Ithaca College in upstate New York, knowing only that she wanted a career helping people and had an interest in anthropology.

Her career aspirations became more focused during a biological anthropology course where Friedlander learned about the Defense POW/MIA Accounting Agency, which runs a program within the U.S. Department of Defense that sends forensic anthropologists to recover and identify the remains of prisoners of war and soldiers missing in action from the Vietnam, Korean and second world wars.

“I knew I wanted to do something like that where I could help people, but in an unconventional way.”

Midway through her degree and looking for a different challenge, Friedlander applied for and subsequently won a Killam-Fulbright fellowship, an award given to 25 Canadian and 25 U.S. undergraduate students to study as an exchange student in the other country.

Based on her grades and her anthropology degree requirements, she ended up at the U of A.

“I really didn’t know much about Edmonton before I went up there,” said Friedlander. “When I got accepted to the University of Alberta, I did research and found courses that opened options that were unavailable at Ithaca. The ability to learn and grow a skill set that would allow me to work towards the career I wanted was enough motivation for me to move from the eastern U.S. to Edmonton.”

Although the U of A’s forensic anthropology program is modest in size—”I probably wouldn’t have found out about it if I hadn’t done the exchange,” noted Friedlander—it is quite storied.

The program took its start from Owen Beattie—who gained international attention in 1984 after determining members of the lost expedition of Sir John Franklin, which left England in 1845 in search of the Northwest Passage, died of lead poisoning that could be traced back to the ship's tinned food supply—and is carried on today in part by Mayne Correia.

“I took some classes with her, got to know her, and she told me if I ever wanted to go to grad school, I should contact her,” remembered Friedlander.

With renewed focus, the budding forensic specialist returned to New York, graduated from Ithaca, promptly made good on Mayne Correia’s offer and returned to the U of A.

“It felt like I was coming back home. It just felt right,” she said.

Her supervisor-in-waiting was just as happy to see her newest pupil.

“When she puts her mind to something, it’s done, yet you never get the feeling she’s running you over,” said Mayne Correia. “She hit wall after wall with her program but was so creative in dealing with barriers.”

For her thesis, Friedlander looked at how blunt and sharp force trauma are able to be differentiated from heat fractures in cases of cremation on irregular bones. She also did background research and preliminary testing on the use of embalmed cadavers in forensic recreations.

Mayne Correia said both elements of Friedlander’s project are rather novel and will be added to the literature for future studies.

“For her project, she could have putzed along and burned her bones, gone in a simple qualitative direction and done just fine,” said Mayne Correia. “But she felt that wasn’t enough and started to look elsewhere on campus for resources that might help her do such an analysis better.”

Friedlander worked with the Division of Anatomy’s anatomical gifts program to secure the necessary remains and then looped in researchers in the Department of Civil and Environmental Engineering to help build a way to distinguish various fractures based on 3-D modelling. Now she is looking at having three published papers by early next year.

“Very cool, very innovative and totally self-directed,” said Mayne Correia. “She would make a great academic, but that’s not her. She wants to apply what she has.”

Friedlander’s excellence in the lab and her eagerness to assist Mayne Correia and the RCMP with field searches and recovery helped her beat out 86 hopefuls for a spot with the Michigan State Police Special Investigations Missing Persons Unit, a job she started just one month ago.

Her responsibilities include co-ordinating information supplied by 82 Michigan county medical examiner offices in managing and updating the national database for missing and unidentified remains.

She said along with the exhumations and excavations, she is responsible for co-ordinating field searches and working with both the cadaver dog police officers and the crime scene technical teams. She is also responsible for gathering DNA samples, both bone and tissues, from the cadavers and skeletal remains at the various county morgues.

“It’s a dream job,” said Mayne Correia. “She has already achieved what took me 30 years.”

As for Edmonton, Friedlander said she will miss it but is focused on getting started on her career.

“During the job interview, I asked my supervisor what her favourite part of the job is. She said it was just so gratifying to be the person to say, ‘I found your son, daughter, mother or father,’ give them back to the family and let them put that to rest and move on knowing their loved one is now safe.

“I look forward to experiencing that myself.”