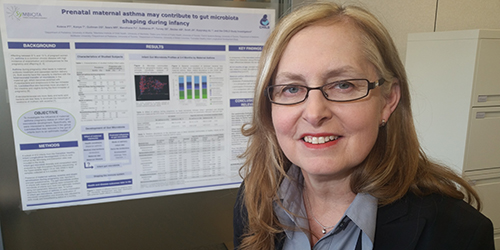 Infants whose mothers receive antibiotics during delivery are more likely to have altered amounts of intestinal bacteria that can affect their immune systems. This research comes from the Canadian Healthy Infant Longitudinal Development (CHILD) Study.  Dr. Anita Kozyrskyj, professor in the Department of Pediatrics at the U of A is a senior author of the study, recently published in BJOG: An International Journal of Obstetrics and Gynaecology.

The discovery showed altered levels in infant gut bacteria at 3 months of age. The altered amounts were present in both children whose moms received antibiotics and delivered either vaginally or via caesarean section.

At three months of age, analysis of 198 infants shows lower amounts of Bacteroidetes and higher amounts of Cloistridiales in the children whose moms received antibiotics compared to the ones whose moms did not.

This research also reveals that breastfeeding can modify some of the effects of the antibiotics.

“Breastfeeding does affect the composition of the gut and it does promote certain types of beneficial microbes to inhabit your intestine. Formula fed infants have a different composition at 12 months,” says Kozyrskyj.

At delivery, women are routinely tested for Group B Streptococcus (GBS).  The standard of care in North America is to administer antibiotics treatment if a woman receives a positive culture for GBS. European countries like the UK, Denmark and Netherlands look to see if there are other risk factors. They don’t treat solely on the basis of the culture. As a result, a substantially lower number of European women receive antibiotics during delivery.

“We’re hoping that this report will lead to some re-evaluation of the standard of care to reduce unnecessary exposure of the newborn to antibiotics,” says Kozyrskyj.

The CHILD study is funded by the Canadian Institutes of Health Research and AllerGen NCE. This study involves more than 3,500 families and their newborn infants across Canada who are being closely monitored to determine the genetic and home environment factors that contribute to health outcomes including allergies and asthma.

The study will continue to look into food allergies at three years of age and determine which gut bacteria during infancy predict the persistence of food sensitization. They will also study gut bacteria patterns in relationship to overweight at age three.