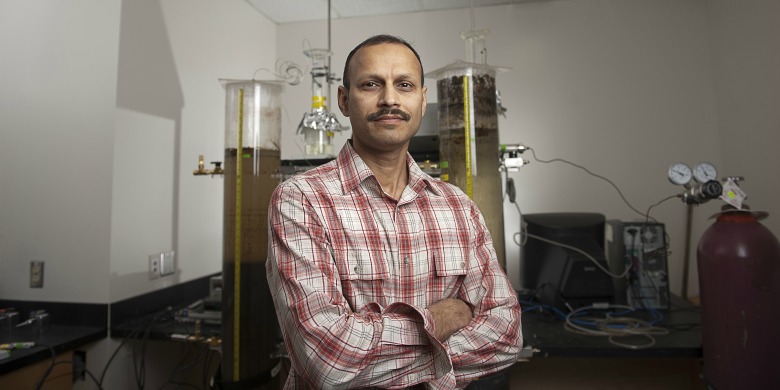 Tariq Siddique and his research team are working on ways to use microbes to increase the amount of water recovered from oilsands tailings ponds.
Tariq Siddique, Soil Chemistry Renewable Resources

(Edmonton) As Alberta faces increasing pressure to make the oil industry more sustainable, one U of A researcher may have found a natural solution to a problem that has been plaguing oil companies for years.

Tariq Siddique, an assistant professor in the Department of Renewable Resources and principal investigator with a U of A oilsands densification group led by biological sciences researcher Julia Foght, says he and his team are finding that microbes could be used to increase the amount of water recovered from tailings ponds.

When oilsands are processed, tailings are the materials left over. They include water, clay particles, unrecovered bitumen, and residual solvents that are used during the process of refining oil. This leftover material is dumped into tailings ponds where it can take three to five years for the water to separate from the clay particles. Even then, further settling requires decades.

“According to the rules and regulations, [companies] are required to recycle 85 to 90 per cent of the water that they use. If [tailings] don’t settle quickly, they are not able to recover more water,” explained Siddique, adding that although some companies are using polymers to quicken the densification process and meet the requirements, the future environmental implications of this are unknown.

Siddique and his collaborators have found a natural way to speed up the settling process—they discovered that microorganisms in tailings ponds degrade hydrocarbons, even complex hydrocarbons, from residual solvents and leftover bitumen, which rids tailings of these contaminants.

“Where microbial activity is more, we have seen more densification, more settling of clay particles,” he said. “In this case … with a natural process, you are able to settle the clay quickly [and] you will recover more water for reuse in the extraction process.”

Because more microbial activity means more densification, Siddique has been conducting studies using a small-scale bioreactor in which he feeds organic waste to microbes to grow the population, hoping to accelerate densification. In the lab, his team observed about 20 per cent water release within static columns, while in the bioreactor, they observed about 40 per cent water release.

“We were thinking that if you construct a kind of bioreactor, feeding microbes with some agricultural waste products, you can increase the microbial population to accelerate densification.”

However, there is a potential drawback to an increased microbial population—this process of hydrocarbon breakdown brings greenhouse gas emissions, particularly methane. Siddique says it can be turned into a positive source of energy.

“You can trap and use [it],” he said. “Otherwise, any unrecovered hydrocarbons—humans won’t be able to utilize those. But if you can transform it into methane, you can use those.”

Siddique has also developed a kinetic model in order to predict how much greenhouse gas will be produced depending on the amount of hydrocarbons in tailings, which could be used to calculate the emissions of oil companies and help in developing regulations to mitigate these emissions.

Tailings ponds cover about 170 square kilometres of land in Alberta.