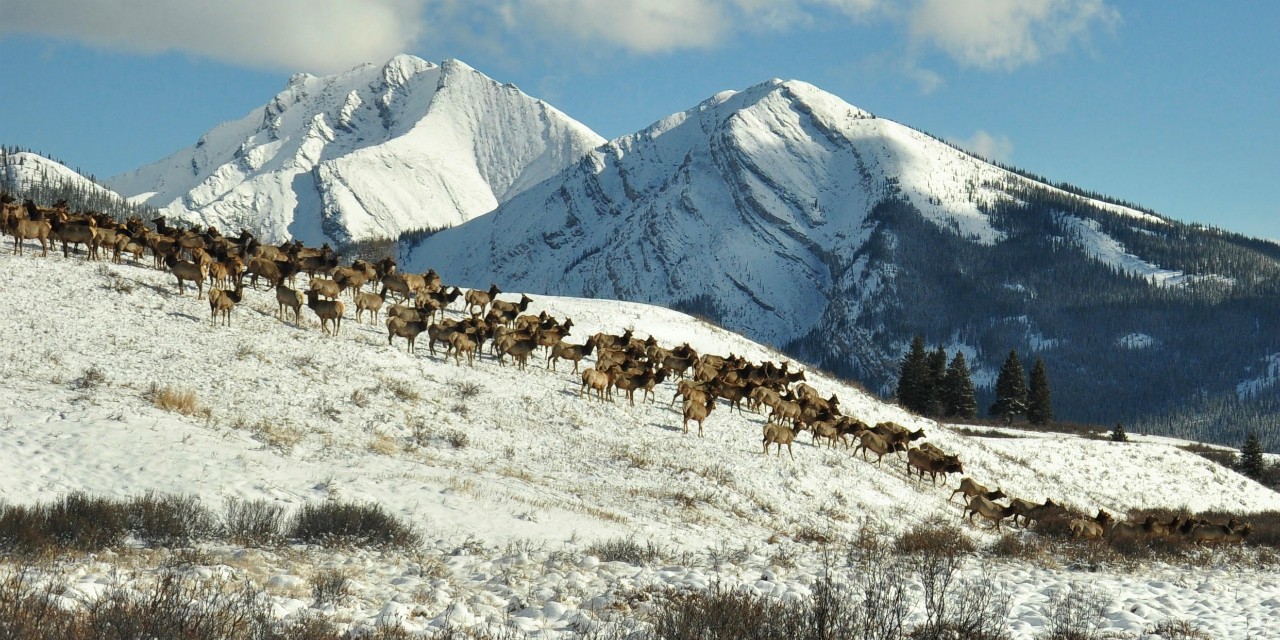 An international study of how human activity affects movement of mammals included data from UAlberta biologists who study migratory elk moving along the eastern front of the Rocky Mountains and around Banff National Park. (Photo: Celie Intering)

Around the globe, mammals move distances two to three times less in human-modified landscapes than they do in the wild, which could affect some important ecosystem functions, according to research published recently in Science.

The study, led by researchers at the Senckenberg Nature Research Society and Goethe University Frankfurt with support from the University of Alberta, included 115 scientists collecting data from more than 800 animals in 57 mammal species worldwide.

The movement data, including hourly location tracking over two months, was compared to the Human Footprint Index, a measurement of human activities such as infrastructure, settlements and agriculture.

U of A biological sciences professor Evelyn Merrill and former PhD student Mark Hebblewhite collected data on the movement of migratory elk along the eastern front of the Rocky Mountains and around Banff National Park. Merrill has been studying elk movement in Canada for 16 years.

“Our data contributed perspectives on the gradient of environmental conditions that influence animal movement, a key to assessing the human impact on animal movements at a broad scale,” said Merrill.

The cause for shrinking movement patterns is a question for future research, although many scientists speculate it may include physical barriers, landscape fragmentation and the possibility that mammals are simply sticking to areas where food is abundant.

The study identifies concerns that reduced travel distances could affect some ecosystem functions, such as transporting nutrients and seeds.

“Movement by mammals brings different species together and allows for interactions in food webs that might otherwise not occur. If mammals move less, this could alter any of these ecosystem functions,” said Marlee Tucker, from the Senckenberg Biodiversity and Climate Research Centre and Goethe University Frankfurt.

Back in Canada, Merrill will continue her study of elk.

“We want to understand the factors influencing the shifts in migration patterns we have documented in Western Canada.”

The study, “Moving in the Anthropocene: Global Reductions in Terrestrial Mammalian Movements,” was published in Science.