Remembering a most excellent alumnus

University mourns the passing of Ernest Côté, '38 LLB, a Second World War veteran who helped plan the invasion of Normandy. 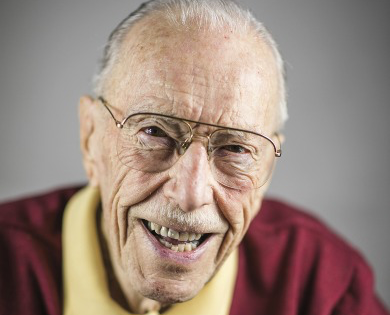 UAlberta alumnus Ernest Cote, '38 LLB, who served in the Second World War and helped plan the D-Day invasion of Normandy, passed away Feb. 26 at the age of 101. (Photo: John Ulan)

(Edmonton) World War II veteran and University of Alberta alumnus Ernest Côté, '38 LLB, passed away yesterday at the age of 101.

A senior planner for the invasion of Normandy, Côté was awarded the Most Excellent Order of the British Empire by King George VI, as well as France’s Legion of Honour Award, in recognition of his military service. Côté also helped draft the charter of the World Health Organization, and was deputy solicitor-general during the FLQ crisis in 1970. He knew every prime minister since Mackenzie King, and his passing was recognized yesterday by Prime Minister Stephen Harper and in the House of Commons.

John Ulan from the Office of Advancement spent the day with Côté last November, photographing him for the "What 100 Looks Like” issue of New Trail magazine. Ulan, a World War II buff, talked to Côté for more than six hours about his experiences in the war.

"Ernest was just not any World War II veteran," Ulan says. "He was one of five Canadians who were aware of the D-Day assault on Normandy." As such, Côté was heavily involved with Operation Fortitude, the Allied plan intended to trick the German high command and divert its attention away from the imminent attack on Normandy. Côté showed Ulan some of his photos from that time, including pictures of him and King George VI. Two different versions of these photos were made, so that one with misleading information within it could be supplied to English double agents to return to their (supposed) Nazi handlers.

Côté arrived at the U of A just as the winds of war began sweeping across Europe. He recalled to Ulan his pleasure in walking to campus over the High Level Bridge from his home in north Edmonton, but said he was sure that world war would come sooner rather than later. Côté enlisted in the officer training that was happening right on the U of A campus. (He would perform his drills and exercises like map reading in Quad.) Once he graduated, he went directly to England and enlisted, skipping the basic training that most soldiers were required to perform.

A Franco-Albertan born and raised in Edmonton, Côté was a generous contributor to his alma mater, in particular Faculté Saint-Jean (now Campus Saint-Jean). Côté created the Jean-Léon Côté Scholarship, named after Côté’s father, a Canadian Senator. Côté was recognized for his contribution to Campus Saint-Jean in 2011.

Côté is the second U of A alumnus over the age of 100 to recently pass away. The university's oldest alumnus, Bill Kent, passed away at the age of 106 in October.

Remembering a most excellent alumnus
Newsroom