At the age of two years Les was found sitting on the floor of his nursery putting a demolished alarm clock back together. This was the beginning of his career as an Engineer. 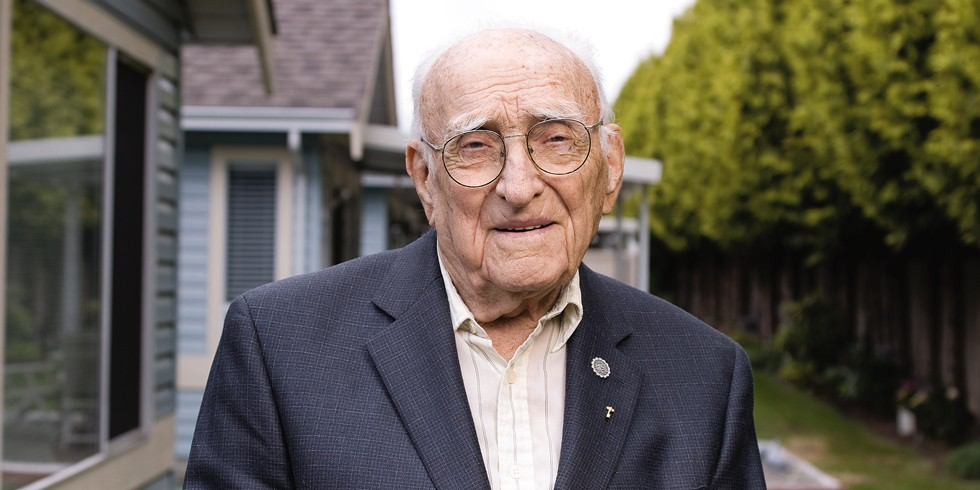 Bill Kent, the University of Alberta's oldest alumnus, passed away at the age of 106.

(Edmonton) The University of Alberta is mourning the loss of its oldest alumnus, a man whose remarkable life spanned the university’s entire history. Bill Leslie Kent, who graduated from the U of A’s Faculty of Engineering in 1931, passed away Oct. 11, just days from what would have been his 107th birthday.

Born Oct. 19, 1907, in Content, Alta., about 65 kilometres east of Red Deer, Kent and his family followed the railroad to the neighbouring town of Delburne when he was six years old. He showed an early talent for building things. As a toddler, he could take apart a clock and put it back together. As a young boy, after seeing a rotary snowplow clearing the railroad tracks near his home, he made a working version from salvaged scrap metal.

“My dad ran a livery stable during an era when horses were the main form of transportation,” Kent recalled. “When cars started to rule the road, he had to find another career, and it was my mother who decided we should move to Edmonton. The reason? Simple. The University of Alberta was there, and she wanted me to live out my dream of becoming an engineer.”

Kent’s dad started work for a local lumber company, but in the 1920s Alberta was in a deep recession. His mom took in boarders, saving money for Bill’s education. During his final years of high school at what is now Old Scona Academic High School, Kent worked during the summers at the lumber company with his dad—for 35 cents an hour.

When Kent began his engineering studies in 1925, the stand-alone Faculty of Engineering was only four years old. The School of Nursing had just launched, the first medical students educated entirely at the U of A graduated that year, and the Tuck Shop had been open for one year. Enrolment was about 1,220 and the government grant was some $475,000. Only two students on campus had cars.

“If I had a dime in my pocket during those six years at the U of A, I thought I was rich,” Kent said. “And one day I had a clear choice while at the Tuck Shop. For 10 cents I could buy a pack of cigarettes, or I could get a cup of coffee and a cinnamon bun. I chose the latter. It was a wise spending choice, and I also credit that choice to my longevity!”

He graduated with a degree in civil engineering in 1931, just as the Great Depression was descending. While working for the Alberta government for three summers as a surveyor, he met his wife, Doris.

“Dean Wilson suggested I go see the provincial survey head. I did, and ended up surveying all over northwest Alberta. I was in the bush and muskeg every summer,” he recalled. “In the winter, my classmate Dudley Menzies—later the city’s chief engineer—had me design concrete, arched bridges around Edmonton. You probably cross one of these old bridges if you drive anywhere near the city’s old core. But by the time I married in 1934, at the height of the Depression, I knew that spending the summers away from home wasn’t for me.”

The newlyweds headed to Vancouver for their honeymoon, and ended up staying there.

In 1936, Kent was hired as a civil engineer on the Lions Gate Bridge. He was involved in designing and pouring the anchor piers, and casting the famous concrete lions at the bridge’s south entrance. He was in the first car to travel across the bridge upon its completion in 1938.

Kent helped prevent a serious snag in the Lions Gate construction. He had taken the first course in the “relatively new” soil mechanics area. So, as a young engineer on his first real job, he looked at the plans for the piers and thought, this is not the best way to build them.

“When we started the south anchor,” he explains, “the test pits showed that the soil was strong, lots of hardpan, very strong. So we convinced the head man, with this new science, to reduce the size of the anchor, change its shape—and it saved a bundle.”

He went on to design or build bridges and power plants in every province and territory in Canada. His favourite projects included the Powell River laboratory and concrete-arch dam; magnesium plants in Nevada during the Second World War; an Air Force training camp at Abbotsford; Churchill Falls generator installation; the Canso Causeway connecting Cape Breton Island with the mainland; hydro plants at Grand Rapids, McArthur Falls, Exshaw and Snare River; a powerhouse at Bennett Dam; the western half of the DEW line; buildings on the UBC and Simon Fraser University campuses; and the St. Lawrence Seaway excavation. He also helped build the Red River Canal around Winnipeg, and its concrete control dam.

“I grew up wanting to build things,” he said in 2009, “and I’m still chomping at the bit to build something.”

The U of A’s proudest booster

Kent wasn’t just the U of A’s oldest alumnus; he was arguably its proudest. From his first day on campus in September 1925, he bonded with the U of A.

“Our pastimes were simple. There was suicide slide on campus, where you could hurtle down the hillside on a toboggan down to what is, today, Emily Murphy Park. Or you could skate at Jimmy Smith’s outdoor rink in Strathcona, at Whyte Avenue just off 109 Street, with a freshly flooded rink and a band on ‘skids.’ We’d also skate at the new Varsity Rink on campus, which all the students helped pay for.” A Gateway story from Jan. 19, 1928, actually identifies “Les” Kent as the coach of the Golden Bears Intermediate hockey team.

“We had close friends—from high school, and from church,” Kent said. “A hike down to Whitemud Creek was free, and we’d roast wieners and buns. We all went down to the river as a group, but we came back as couples.”

When Kent turned 99, his daughter Jane and son-in-law Stan established a bursary to honour Bill and his wife, Doris, who passed away on the eve of their 70th wedding anniversary. The bursary is designed to help first-year engineering students who are struggling financially. In his dining room, Kent hung the plaque engineering Dean David Lynch gave him to honour the bursary that bears his and Doris’s names.

“I well remember the struggle to make ends meet when I was in engineering, and I know how my parents sacrificed to get me through,” he said. “I am deeply grateful that this bursary has been established. I also make sure to meet each year with the student who has received the bursary. It’s a great feeling to know you are helping someone in need, someone with a passion to be an engineer.”

Kent would return to Edmonton for the U of A’s Alumni Weekend every five years while he was working. Once he retired at age 65, he made the 900-kilometre trip every single year from his home in Langley, British Columbia, to enjoy the festivities. He loved hanging out during those weekends with current engineering students, listening to their stories, their concerns about the cost of going to university, and their dreams for the future.

Ellen Schoeck, former director of the University Secretariat and author of I Was There, a collection of alumni stories about the U of A, knew Bill for many years and considered him a close friend. She visited him often in Langley, and saw him as recently as September.

"Bill knew he would be missing Alumni Weekend this year," she said. "He wished he could make one more trip to his alma mater. He recounted to me many times how his time at the University of Alberta changed the course of his life."

The university recognized Bill’s contributions by giving him the Alumni Association’s Alumni Honour Award in 2009.

“Mr. Kent was passionate about the University of Alberta and the Faculty of Engineering,” said Sean Price, associate vice-president of alumni relations and executive director of the Alumni Association. “He could describe his fellow students, his professors and those with whom he interacted over the years after graduation with pinpoint accuracy. Although I only knew him late in his life, you could tell he was proud of his Alberta roots, his time at Old Scona in Edmonton, and his alma mater.”

In 106 years, Kent’s life spanned most of the 20th century, and he bore witness to a remarkable number of historical events and technological changes. Up until Grade 10, for example, he studied using a coal oil lamp. His life also spanned the entire history of the University of Alberta. He once remarked to President Indira Samarasekera that he considered it an honour to have met all 12 U of A presidents, including founding president Henry Marshall Tory. Since Bill’s convocation in 1931, 278,417 alumni have graduated from the U of A.

“Our alumni were proud of him,” Price said. “They flocked to see Bill whenever he attended an event to hear his stories about campus in the early years, or about the construction of the Lions Gate Bridge, and, of course, to wish him continued longevity. He will be missed."

Bill Kent is survived by his three children, Bill Jr., Carol, and Jane, as well as seven grandchildren and 12 great-grandchildren.

Note: This story is adapted from an article by Ellen Schoeck in the Fall 2009 issue of U of A Engineer magazine.