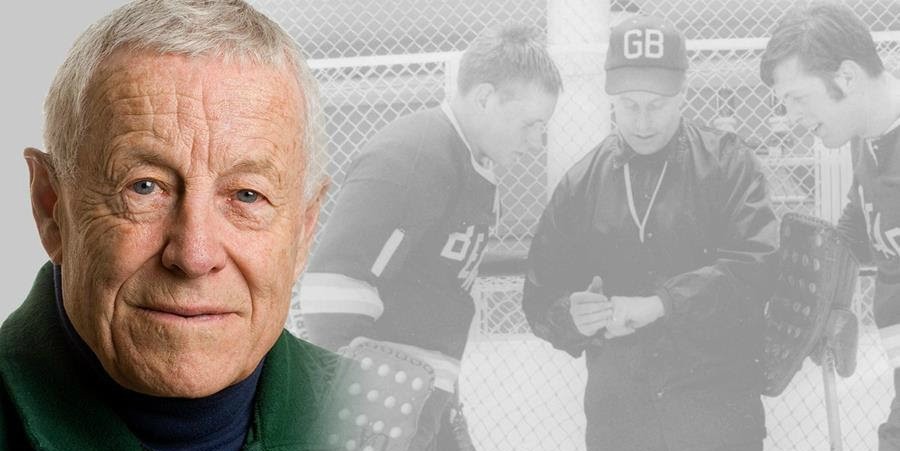 A legend in the coaching profession, Clare Drake died Saturday night. He always thought of himself as a teacher first, and influenced generations of hockey players and coaches.

The man best known as a coaching legend, especially in hockey circles, but who always considered himself a teacher first, instilling a lifelong passion for learning in generations of University of Alberta student-athletes, died yesterday morning. He was 89.

Clare Drake, a longtime professor emeritus in the Faculty of Kinesiology, Sport, and Recreation, was synonymous with Golden Bears hockey. He led his teams to six Canadian titles and 17 western conference championships over a 28-year head coaching career that spanned 1,030 games.

His coaching expertise also pushed the football Golden Bears to championship heights, and in fact he remains the only Canadian interuniversity coach to lead both hockey and football teams to championships in the same year, 1967.

"Clare Drake laid the foundation for excellence in athletics and coaching at the U of A and is often acknowledged for being ahead of his time," said U of A president David Turpin.

Drake was a champion through hard work and a commitment to learning.

“Hard work is the cornerstone for becoming successful, as I’ve said for a long time to all my players, and it’s the same thing for a coach,” he said in a 2008 interview upon his induction into the Alberta Order of Excellence—the province’s highest civilian honour. “Success is not a natural phenomenon. Success only occurs to people who are willing to put in the time to achieve it.”

Drake considered it a great privilege to work with student-athletes who were committed to becoming better players on the ice and well-rounded individuals in life. Students were motivated to reach for new heights, and he played an integral role as a coach and a teacher.

“They’re the same thing, really. It means you’re taking the wisdom of people that have gone before and ... applying some of that wisdom to your own life,” he said.

Kerry Mummery, dean of the Faculty of Kinesiology, Sport, and Recreation, first met Drake when he was a graduate student in the late ’80s.

“I met him again shortly after I took on the role of dean in 2010,” he said. “I’ve played for, coached against and worked with many coaches over my life and career, and understand clearly the impact a coach can have on a young person's life. Even so, I am constantly astounded by the lasting positive influence Coach Drake had on his athletes, many years and decades past their playing days. Clare truly epitomized the power of sport."

Life of a champion

Clare James Drake was born on Oct. 9, 1928, in Yorkton, Sask., the only child of Clarence and Grace. Growing up, he excelled at sports—hockey and baseball in particular—and played junior hockey in Regina and Medicine Hat before moving on to play at the University of British Columbia, where he graduated with a degree in physical education in 1951.

Drake married his high-school sweetheart, Dolly Carlson, and briefly coached football for his former high school in Yorkton. The family moved to Edmonton so Drake could study education at the U of A.

As a student, Drake played one season with the Golden Bears, winning the Western Canada Championships as the team’s scoring co-leader. After earning his bachelor of education in 1954, he moved to Düsseldorf, Germany, where he played and coached hockey in the semi-pro ranks—an experience that ignited his passion for coaching.

The Drakes returned to Canada just a year later so Clare could teach and coach at the newly built Strathcona Composite High School. Around the same time, he also joined the Golden Bears as an assistant to head coach Don Smith.

Drake would take over as head coach upon Smith’s retirement in 1958, setting in motion a 28-year career that would solidify him as the nation’s most respected bench boss in interuniversity hockey.

His coaching expertise also extended to football, when he guided the Golden Bears for three years in the mid-to-late 1960s, compiling a record of 23–4 and winning a national title.

Legacy extends beyond the U of A

“Clare’s legacy as a hockey coach is found in hockey rinks throughout Canada, and the world, because his ideas are now standard for the how the game is played at a community level, at a professional level and at an Olympic level,” said Ian Reade, director of athletics at the U of A from 1993 to 2001 and again from 2011 to present.

“But more than that, he has a legacy of research, of gathering of information and sharing information which has helped the game of hockey evolve and grow. Those principles are at the very foundation of the University of Alberta, and of everything Golden Bears and Pandas Athletics does.”

Several well-known coaches, including Ken Hitchcock, Dave King and many others, credit Drake for changing the profession and having a great influence on them.

“I’m a head coach today because of Clare Drake,” Toronto Maple Leafs head coach Mike Babcock told the Edmonton Journal in 2011, when he was head coach of the Detroit Red Wings. “His inventiveness and analytical mind have contributed so much to the growth in the tactics and strategies of Canadian hockey.”

Drake also had a profound influence on many players whom he always pushed to greater heights. They included, among others, Randy Gregg, who won five Stanley Cups with the Edmonton Oilers and became a doctor, and Wilton Littlechild.

At a special ceremony last November, in advance of his induction into the Hockey Hall of Fame, both former Golden Bear players were there to honour Drake. Littlechild, who is Grand Chief of the Confederacy of Treaty Six First Nations, presented Drake with a ceremonial headdress.

“He taught me the Golden Bear hockey tradition on how to work hard, not just in hockey but in life. It was the life teachings that he shared with me on the ice for which I’m most grateful and are most meaningful for me.

“My tribe agreed to honour him by giving him a Cree name in a ceremony, but went one step further by naming him an honorary chief for Treaty 6.”

Drake was given the Cree name Spotted Eagle along with the honorary title Chief Golden Bear.

To celebrate his induction into the Hockey Hall of Fame, Clare Drake was honoured at a special ceremony in the arena that bears his name.

Accolades for a legend

Drake was a co-coach of the 1980 Canadian Olympic hockey team and coached several national student teams. In 1984, he guided Team Canada to its first ever gold medal at the Spengler Cup tournament.

He earned no shortage of accolades during his historic career. Last November, he was inducted into the Hockey Hall of Fame, the only university coach to receive the honour. Previously, the U of A honoured him by inducting him into the University of Alberta Sports Wall of Fame in 1987 and renaming Varsity Arena Clare Drake Arena in his honour in 1990. He also received an honorary doctor of laws degree in 1995 and a Distinguished Alumni Award in 1999.

Drake was named CIAU Coach of the Year in 1975 and 1988, and Canada West Coach of the Year four times, in 1975, 1985, 1987 and 1989. In addition to being inducted into the Hockey Hall of Fame, he was inducted into the Alberta Hockey Hall of Fame in 2005 and the Alberta and Canadian sports halls of fame in 1980 and 1989, respectively. In 2014, he was awarded the Order of Hockey in Canada as well as the 3M Gordon Juckes Award, both from Hockey Canada. He was the recipient of the Geoff Gowan Award in 2006, the Coaching Association of Canada’s top award. Drake was also an honorary life member of Football Alberta.

In addition to the Alberta Order of Excellence, he received an Alberta Centennial Medal in 2005 and was named to the Order of Canada in 2013.

A celebration of Drake’s life will be held at 1:30 p.m. on Thursday, June 14, at the Butterdome on the U of A campus. Please RSVP at uab.ca/drake.

In memoriam, donations may be made to uab.ca/give2sport or to a charity of your choice.