University of Alberta community mourns former chancellor who had a gift for "bridging divides of region and language." 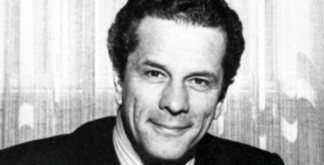 Former U of A chancellor Louis Desrochers is well known for his decades of tireless public service and work in the francophone community.

"Mon ami Louis Desrochers," said Chrétien, thanking his longtime friend for a lifetime spent "bridging the divides of region and language" and "making us aware that our differences are not weaknesses to be feared but strengths to be celebrated."

Truer words had never been spoken about former University of Alberta student and chancellor Louis Desrochers, a tireless national champion of French language education—especially at his alma mater—who died Sept 28. He was 87.

Born in Montreal in 1928, Desrochers and his widowed mother came west to Jasper in 1939 where he continued his French education, attending the Collège des Jésuits in Edmonton in 1942.

From there, Desrochers attended what was then Le Collège Saint-Jean d’Edmonton until 1947 before moving to Ottawa to complete his undergraduate schooling at the end of the Second World War.

Desrochers returned to the Edmonton in 1949 to attend law school.

"I lucked into a great class,” he once told New Trail. “We had a lot of fun.”

After graduating from the Faculty of Law in 1952, Desrochers articled with the McCuaig law firm, which led to his partnership with U of A alumni and equally passionate education advocates Jean de la Bruyère and Sandy Mactaggart.

In 1960, Desrochers was appointed by Prime Minister John Diefenbaker to the Northwest Territories Council, on which he served until 1963.

That year, based on his extensive community involvement, Desrochers was appointed to the U of A’s Board of Governors. As a board member, he worked hard to help strengthen the ties that now bind the U of A and “The U of A en français.”

By 1970—the year that Desrochers was elected chancellor of the U of A—those ties resulted in the college becoming Collège universitaire Saint-Jean, which offered university- and high school-level programs in French. By the time Desrochers's tenure as chancellor ended in 1974, the full integration of the collège into the university as Campus Saint-Jean was just three years away.

In 1974, Desrochers was invited to join and served on the Trilateral Commission, an organization of world leaders representing Europe, Japan and North America, a post he would hold until 1981.

While credited nationally as a unifying force, Desrochers’s boundless enthusiasm showed up in his singular zest for his service locally. A mainstay on numerous local corporate boards, Desrochers extended his skills to such organizations as the Edmonton Family Service Bureau, the Misericordia Hospital, the Canada Council, the Glenbow-Alberta Institute, the Devonian Group of Charitable Foundations and the Alberta Order of Excellence Council. He was also the first chair of the Edmonton General Hospital (Grey Nuns) Foundation, which established what Albertans now recognize as the Caritas Hospitals Foundation. He also served as honorary chairman of the Edmonton Community Foundation and spent time early in his career as director of Edmonton’s French Language radio station.

In 1994, Desrochers was inducted as a member of the Order of Canada and, in 2001, into the Alberta Order of Excellence. He also holds honorary degrees from the U of A, University of Ottawa and Laval University. He married Marcelle Boutin in 1953 and they had five children, all of whom are graduates of the Faculté Saint-Jean.

“This is very sad news for many communities as Louis was an exemplary Edmontonian, Albertan and Canadian,” said U of A chancellor Ralph Young, adding it was Desrochers who signed Young’s U of A degree. “I had the privilege of getting to know Louis later, in his legal career and in our mutual interest in the U of A. He was always very kind and respectful to a younger business associate and I have the greatest admiration for him and his legacy.

“I know that he will be deeply missed by family, friends and all those who had an association with him.”

Committed to the U of A through and through, the Desrochers family funds both the Louis Desrochers Scholarship in Law, awarded annually to the student with superior academic achievement entering the first year of study for a Juris Doctorate, and the Marcelle and Louis Desrochers Scholarship Fund for Canadian Studies, awarded annually to a student newly admitted to a full-time master’s degree program in Canadian studies at Campus Saint-Jean.

- with notes from "Connecting Canadians," a story published in the spring/summer 2000 issue of New Trail.