Remembering the service and sacrifice of William Muir Edwards 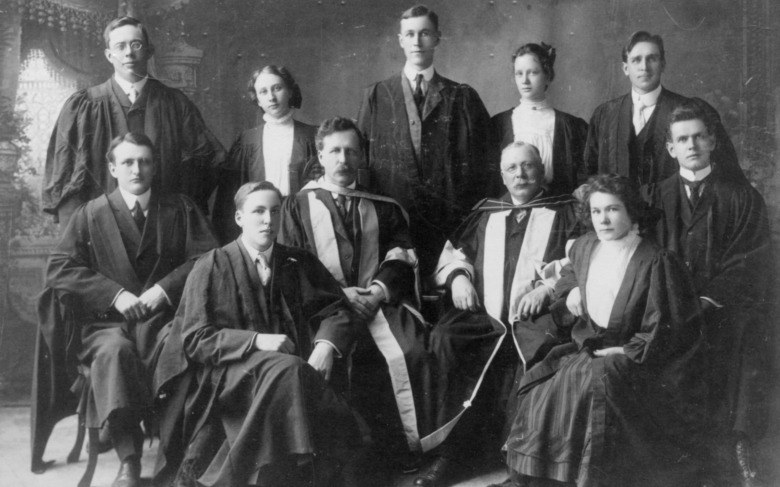 (Edmonton) The University of Alberta is a world leader in engineering, public health and water research, and prides itself on selfless service to the community. That expertise and commitment to community can be traced to the university’s earliest days.

In 1910, William Muir Edwards, one of the university’s first four professors, ended an outbreak of typhoid that was claiming lives—even our own students—by investigating and repairing a faulty water treatment plant. He died in the service of others, tending to victims of the global Spanish flu epidemic at Pembina Hall. On Nov. 14, the university community commemorates the 95th anniversary of his death.

His close friend and colleague, classics professor William Hardy Alexander, penned this upon Edwards’ death: “He tenderly bore the sick in and reverently carried the dead out, and by ready acceptance of the meanest tasks inspired in others a true sense of service.”

Edwards truly lived the U of A’s vision “to inspire the human spirit through outstanding achievements in learning, discovery, and citizenship in a creative community, building one of the world’s great universities for the public good.”

Edwards was a civil engineering professor. Founding president Henry Marshall Tory knew Alberta needed engineers to build roads and bridges and dams, and he wanted them educated at the University of Alberta. The first five engineers graduated from the U of A 100 years ago, in 1913.

Edwards’ mother was the iconic Henrietta Muir Edwards, one of the “Famous Five” who asked the Privy Council of England whether women were included in the definition of “persons” for the purpose of being elected to Canada’s Senate. (The answer was yes.) Edwards himself graduated at the head of his class at McGill, earning his BSc in 1901. He immediately went on to earn his civil engineering degree at McGill the following year, winning the British Association Medal for Applied Science, then served as an assistant professor at McGill until 1907.

That’s when Tory, also a McGill graduate, scooped Edwards from McGill to the U of A.

Edwards was more than just a bright young academic. He also excelled at sports. At McGill, he won the Athletic Association Silver Medal, breaking the record in the two-mile race. In 1908, he wasn’t much older than his students and, after class, Edwards would take them to the open fields in Strathcona, near the old CPR station, to teach them to play rugby football. Students across campus named him the first honorary president of the Athletic Club.

Edwards’ care for students and community grew over time. During the First World War, when many students were in the trenches, he poured himself into a weekly publication, the Comforts Club Newsletter, which was sent overseas along with hand-knitted socks, “tasty bits” like fruitcake and chocolate, and copies of The Gateway to students serving their country. The newsletter was like the Facebook of its time: Edwards would aggregate news sent home from students fighting abroad, along with stories from the university and the province, and send it out every week to subscribers.

In 1918, as students returned to campus from the war, ready for celebration, the deadly Spanish flu epidemic hit, eventually claiming more lives than the First World War. Classes were cancelled. Pembina Hall was turned into an emergency hospital and morgue. Edwards volunteered to nurse students through this deadly flu, and stayed away from his home, his wife Evelyn and his three young children, Douglas, Muriel and Joyce.

William Muir Edwards died from the flu on his 39th birthday.

Today, in the Arts Building, you will find a plaque dedicated to his memory. It is the only plaque ever dedicated to a professor by the entire university. Edwards is buried, with his parents, at Mount Pleasant Cemetery in Edmonton.

The family connection to the U of A remains strong. Edwards’ not-so distant relative, the Hon. James Edwards, is a former U of A board chair. He says Muir Edwards should be remembered for his contributions to the university and the community at large.

“Selfless service, athletics and civic contribution—those are the values he represents,” says Edwards. “Tory gets most of the credit for establishing the university, and rightly so. But there were others involved and William Muir Edwards was one of them. He is a founder of this university. And I would say he founded well.”

A generous financial pledge has been made, anonymously, to honour the memory of William Muir Edwards. If you have been inspired by his story, you can help support this initiative to preserve and promote his dedication to scholarship and service. To learn more, contact Leanne Nickel at 1-800-407-8345 or 780-492-4159, or leanne.nickel@ualberta.ca.

—This story was originally published in the Fall 2013 issue of U of A Engineer magazine.

Remembering the service and sacrifice of William Muir Edwards
Newsroom