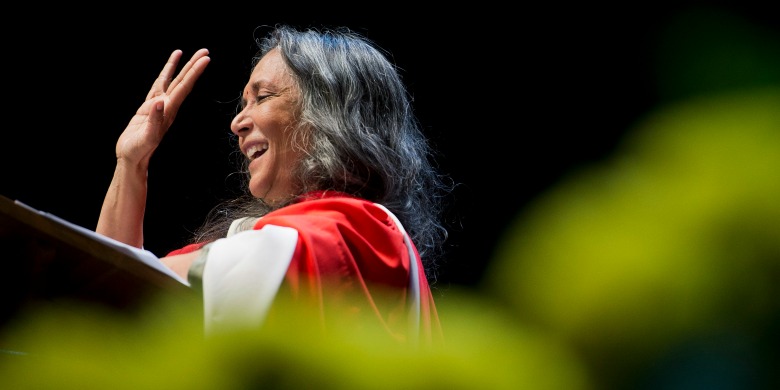 130605-deepa-mehta-banner
Deepa Mehta flashes the Vulcan salute at the end of her address to the class of 2013 during convocation ceremonies June 5. (Photo: John Ulan)

(Edmonton) Often described as Canada’s most renowned female filmmaker, Deepa Mehta told Wednesday morning’s convocating class that graduating is a time to remember what it means to be Canadian.

“[Racism and discrimination] are not who we are as a country,” she said after receiving an honorary doctor of letters degree. “If anybody thinks of you as disadvantaged, because of your colour or your gender, just tell them to take a hike. I totally will not stand for tokenism, because you lose your humanity.”

Addressing graduands in the faculties of arts, pharmacy, native studies and extension, Mehta said core national values refusing to tolerate discrimination—and upholding gender equality, the right to freedom of speech and freedom of religion—“define what is Canada…. As you are walking towards this new phase in your life, remember that the mettle within you is what we should celebrate, not what is imposed on you.

“It’s up to you to jettison racism,” she added, “because when you walk out of here, it must be with the conviction that you are Canadian, and Canadian values are about equality, not discrimination.”

A producer and director of more than a dozen films since the 1970s, the Indian-born, Toronto-based filmmaker is perhaps most celebrated for her Elements trilogy, consisting of Fire(1996), Earth (1998) and Water (2005), which take on many traditional values of Hindu society and reveal the political complexity of India. As a result, the films have attracted considerable controversy: the first was banned by the Indian government after pressure from Hindu fundamentalists, and Mehta was forced to abandon shooting for a time on Water, again after a violent Hindu fundamentalist uprising.

More recently, Mehta directed Midnight’s Children, based on the novel by Salman Rushdie, which premiered at the Toronto International Film Festival in 2012. A film now in production, called Exclusion, deals with 375 Indians seeking asylum in 1914, who were notoriously turned away from the coast of Vancouver because of exclusion laws meant to keep Asian immigrants out of the country.

In concluding her speech, Mehta drew a comparison between the class of 2013 and the crew of Star Trek’s Starship Enterprise, both multiracial teams of explorers setting out to chart the unknown.

As she flashed the Vulcan salute, she said, “We have a chance in life to travel well, without prejudice—so live long and prosper."