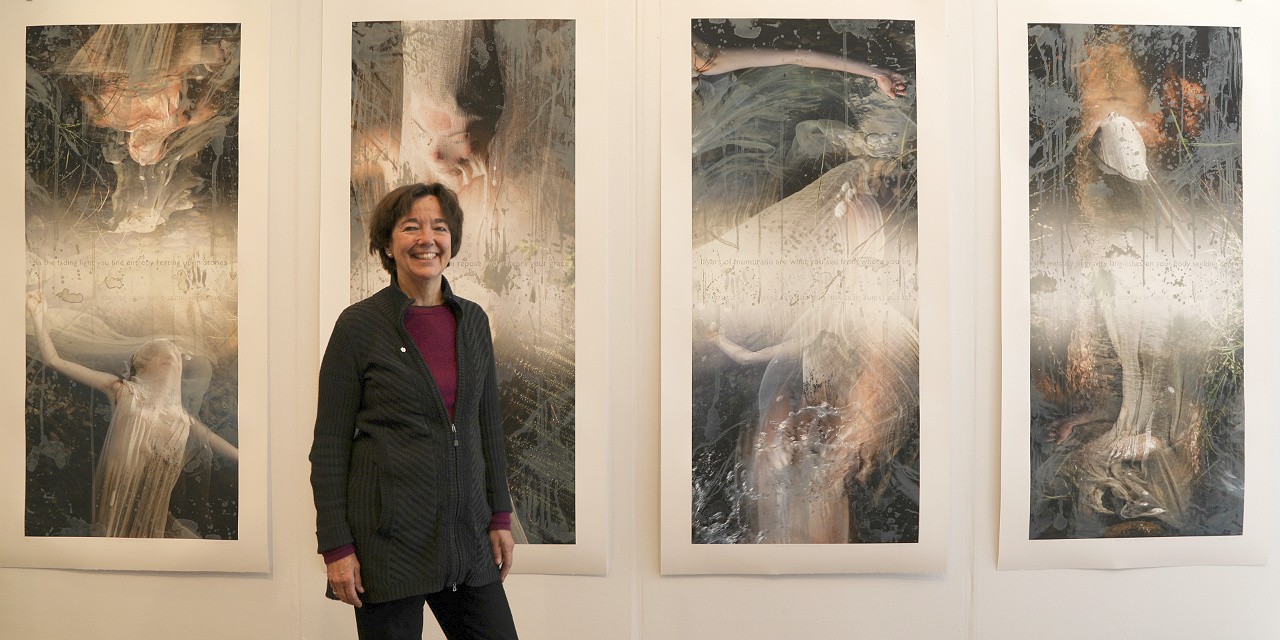 Liz Ingram with a piece from her new exhibition, water/bodies, showing at UAlberta's FAB Gallery until Dec. 9.

In the world of printmaking, Liz Ingram is a global beacon.

During a career spanning more than 40 years, she has shown her work in countless solo and duo exhibits, and in more than 300 group exhibitions in North and South America, Europe, the Middle East and the Far East.

Then there are the awards, including the University of Alberta’s University Cup, the City of Edmonton Hall of Fame and induction into the Royal Society of Canada. Along with other illustrious colleagues such as Walter Jule and Sean Caulfield, she has helped her area in the U of A’s art and design department earn an international reputation as “the Harvard of printmaking.”

Through all of this, Ingram has pursued the same theme in various printmaking media—the mysterious transitional states between the material and the ephemeral, and especially issues relating to the fragility of life and the environment.

According to Caulfield, her work reminds us of "our connection to environment and to the world. We are deeply connected with ecosystems, and we tend to forget that.”

She officially retired from the U of A last year, but is hardly slowing down. Next term she’ll take up a four-month residency as honorary director at proyecto ‘ace in Buenos Aires, capped off with another solo exhibition. In the meantime, she is showing some of the most compelling samples of her life’s work in an exhibit called water/bodies, now showing at the FAB Gallery.

"I believe that we as human beings are permeable, and water is a kind of metaphor for life—we are not separate," she said.

After being raised in Buenos Aires and India, Ingram arrived at the U of A as a graduate student in the mid-‘70s.

"In fact, the first four prints in this show are actually from my thesis exhibition,” she said, “because I came here to do graduate work when the program was relatively new. It was the only graduate program in Canada that offered a focus in a practice-based, studio MFA. It's been an absolutely fantastic journey."

Since then, she and Bernd Hildebrandt, her husband and artistic collaborator, have owned a boreal forest property in the foothills, a place Ingram calls “another collaborator” in all of their work.

"From being in that natural environment, we're very aware of how man is affecting the water,” she said. “We need so badly to protect it, because it's us.” She fervently believes her work, described by dean of arts Lesley Cormack as complex yet “wonderfully accessible,” can help bring people to that realization.

"I think you can increase empathy in people—I really believe that, and I believe (artists) have a role to play in bringing that out."

Water/bodies runs at the FAB Gallery until Dec. 9.