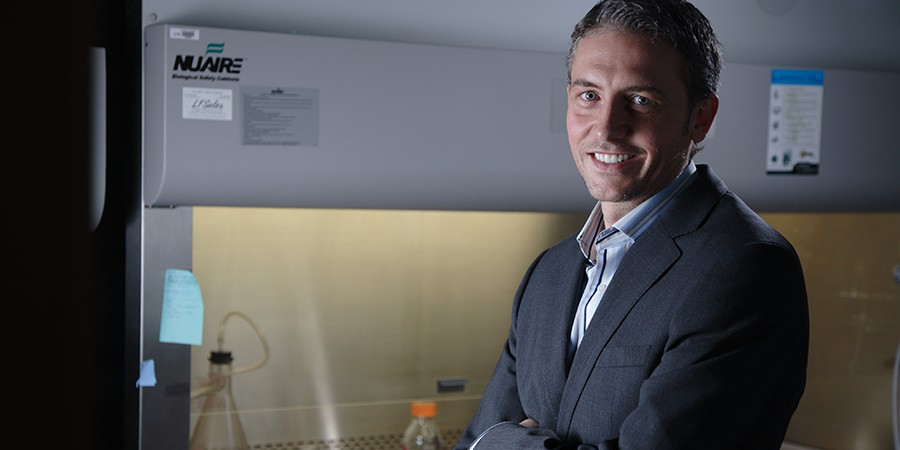 About 80 per cent of all donated hearts are too weak or damaged to ever be used in the approximately 175 heart transplants done in Canada each year. But new research at the University of Alberta’s Faculty of Medicine & Dentistry aims to save more hearts, which will save more lives.

With the help of a new research award, a team of medical researchers at the University of Alberta hope to revolutionize heart transplants by making the donated hearts more durable and less likely to be rejected by the body. The team, led by Jason Dyck, a professor in the Department of Pediatrics and director of the Cardiovascular Research Centre, has won the University Hospital Foundation’s $1 million Gerald Averback Medical Research Award in cardiovascular gene therapy, genomics and vascular biology.

It is the largest single research award in the history of the University Hospital Foundation.

“Our team consists of researchers that are experts in heart transplant and rejection and I have experience in gene therapy,” says Dyck. “This money allows us to work together as a team and to do research that we never would have done before.”

Paolo Raggi, academic director at the Mazankowski Alberta Heart Institute and professor of medicine at the University of Alberta, hails Dyck’s project as a potential game-changer in the field of heart transplantation.

“The Mazankowski Alberta Heart Institute is a prominent national heart transplant centre, so for us to be working in the field of improving the outcome of heart transplants is very important,” Raggi said. “It’s something that could impact cardiac health around the world.”

“I’m thrilled to see that Developments West Corporation’s donation to the University Hospital Foundation has resulted in such exciting and worthwhile research,” said Averback, speaking on behalf of DWC. “Gene therapy and genomics are the way of the future.”

The translational research will focus on how to use gene therapy to genetically modify the heart while it is out of the body and awaiting transplant. Currently gene therapy is difficult to target at a specific organ, but by using it on the heart while it’s isolated from the body, Dyck says adverse effects to other organs can be avoided. The team of medical researchers will be using a hormone called adiponectin to modify experimental hearts in lab models.

“[Adiponectin] is known to be a protective molecule for the heart. The hope is that we’ll engineer the heart so that it produces its own protective barrier, which will improve function, protect it from the potential damage during the transplant procedure and reduce the chances of rejection,” says Dyck.

To be successful though, the work needs the collaborative efforts of the entire team. It includes Lori West, who holds a Canada Research Chair in cardiac transplantation and is the director of the Canadian National Transplant Research Program and the interim director and research director of the Alberta Transplant Institute at the University of Alberta; Darren Freed, cardiac surgeon and researcher at the Mazankowski Alberta Heart Institute and professor at the University of Alberta’s Department of Surgery; and Jayan Nagendran, a heart and lung transplant surgeon, researcher at the Mazankowski Heart Institute and professor in the U of A’s Department of Surgery.

Together, Dyck says they make a perfect team. “Dr. Freed is working on developing an ex-vivo heart system where the heart is removed from the body and kept healthy on an apparatus that keeps it pumping until it’s ready for transplantation. Dr. Nagendran is doing clinical work on a similar system for lungs. Dr. West is an expert in transplant rejection and my own experience is in gene therapy. I think it’s the right team to make significant advances in testing gene therapy in experimental models and ultimately using gene therapy to improve heart transplantation in humans.”

The Gerald Averback Medical Research Award was made possible by a donation from Saskatoon-based Developments West Corporation to the University Hospital Foundation.

The provincial government is supporting a pair of University of Alberta research initiatives in an effort to combat the toll COVID-19 is inflicting on military, veterans, first responders and their …
Read more from this release